Loblaw chose an historic location for it newest and most modern store, which opened in Toronto last week.

The West Block building was built in 1928 and once housed the first Loblaws Groceterias Warehouse in the city.

Following a complete renovation and restoration—at a cost of $400 million—the location is now home to a massive Loblaw, along with a Shoppers Drug Mart and Joe Fresh store, as well as office space for teams from Loblaw Digital, PC Optimum, and PC Financial. 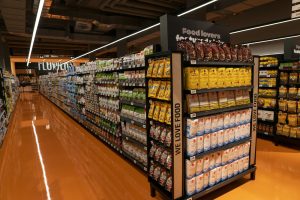 "When the building first opened in 1928 it was hailed as the most modern warehouse of its kind. Our task was to reconstruct a space that represents Loblaw's exciting future and properly captures the essence of both its history, and that of the city," said Galen G. Weston, executive chairman, Loblaw, in a press release.

The site on Lakeshore Avenue in Toronto’s downtown core, is near a number of condominiums, including two new towers (850 units) built as part of the development along with five floors of office space.

"The building is an architectural representation of our company, and our role as an ongoing retail innovator,” said Loblaw president Sarah Davis, in a press release. “It brings together our century-long story, combining convenient bricks-and-mortar store locations and the new hub of our digital, loyalty and financial services teams." 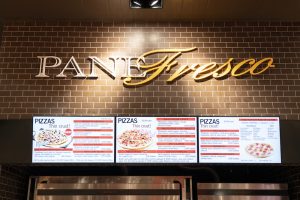 The new store will provide what Loblaw describes as “an elevated grocery experience.” The store includes the first Pane Fresco outside of a Fortinos store. “Pane Fresco offers customers a unique and gourmet to-go food experience with made-to-order Roman style and thin crust pizzas, freshly carved meats in the carvery, sandwiches and soups, hand-crafted beverages at the café, as well as a wide assortment of breads and pastries baked daily,” said Catherine Thomas, senior director of external communications, Loblaw.