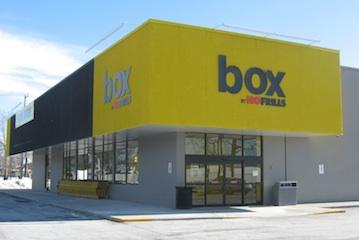 The "Box by No Frills" isn't drawing customers through weekly flyers. That’s because there are none. Instead, shoppers can pick up an eight-and-a- half by 11-inch handbill with the week’s everyday low prices on their way in.

Ditching flyers, dressing staff in warehouse chic (jeans and T-shirts) and tightly editing SKUs are a few ways that the Box’s owner, Loblaw Companies, is keeping costs and prices down.

The Box is a hard discount–style store whose closest comparison might be Aldi and Lidl, Germany’s limited-assortment selling machines.

Two pilot stores opened last summer, in Calgary and Windsor, Ont. Those markets differ widely, but that might be the point. The Box, says Loblaw’s vice-president of discount concepts, Joe Spagnuolo, aims for no single type of customer.

Car-town Windsor is plagued with high unemployment, while oil-town Calgary is booming. If there are any similarities, it’s that both stores are situated in lower-to-middle class neighbourhoods.

Spagnuolo says Loblaw has spent a lot of time talking to the customers to fine tune the format. Changes are being made on the run.

For example, in Windsor, produce has been expanded. “We’ve put a bigger focus on fresh,” says Robert Butler, Loblaw’s district manager for southwestern Ontario. “I think probably when we opened we were maybe too bare bones.”

At the Windsor store, which is housed in a former bingo hall (and, before that, a Mr. Grocer), produce is the first thing customers come across.

Nearby, to the left, is an area known as the Wall of Fame. It’s a dozen large displays of discounted specials on pallets, from bottled water to rice, sugar, flour and kidney beans.

“It’s a window to the store,” Spagnuolo says. “We don’t have any advertising and so we want to surprise and delight our customers.”

Other merchandising isn’t all that different from No Frills. Packaged meats and dairy, for example, still line the back.

On a recent store tour, Windsor manager, Robert Mills, did point to a bunker with $25 boxes, each containing four steaks, four pork chops, four chicken legs and 16 hot dogs. That, he said, isn’t something you’d see in a No Frills.

Another noteworthy area is the dollar aisle. It carries greeting cards, small toys and kitchen gadgets. An answer to Dollarama? “It’s more that we want to make it the complete type of ,” says Mills. “If someone needs a card, we want them to come here to get it.”

For district manager Butler, the Box is déjà vu, harkening back to the discount stores of three decades ago. The first No Frills stores only carried 500 SKUs whereas most grocery stores of the day stocked 8,000.

“I started in in 1986 and this is almost a full circle,” he says. “It is more in that realm of pallet displays and less SKUs.”

Jeff Doucette, analyst with Calgary-based Field Agent Canada, says the Box could be an “exploratory” effort by Loblaw to test a deep-discount format similar to Aldi and Lidl, both of which have been rumoured to be on their way to Canada.

Aldi is “right across the border in the U.S. with 2,300 stores” and it “deploys pretty quickly” into new markets, he says.

“The Box seems to be a pared down No Frills model: smaller format, smaller selection, a little bit more emphasis on the control label side of things versus the national brands, although national brands are still present,” Doucette says.

As for not having flyers, Doucette explains that Aldi gets many customers by word of mouth. “The Aldi U.S. website is sort of their main marketing tool.”

Loblaw, meanwhile, seems content enough with the Box to plan ahead. Spagnuolo says the company is looking to add “a few more” stores this year.