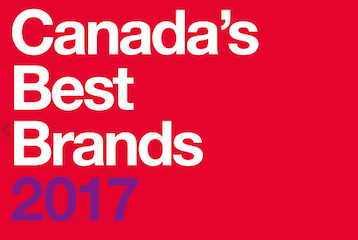 Each year, Canadian Business conducts a national survey to ask Canadian consumers for their opinion on which brands are winning their hearts, minds and—most importantly—wallets. This list shows not just which companies have name recognition, but which ones are truly resonating in the marketplace.

The list of the 25 Best Brands in Canada is the result of a survey of a nationally representative sample of 1,503 Canadians. While MEC took top spot for the second time in a row, and Westjet held steady in third place, Home Hardware jumped an incredible 10 spots this year.

We’ve singled out the food and grocery companies that have made their mark on the rankings.

METRO (#20)
Last year's ranking: 16
Metro saw a minor decline on the ranking this year, but that may simply be because it had a quiet year while its larger rivals—it is Canada’s third-largest grocery chain, behind Loblaw and Sobeys—generated more chatter. The erosion could also be because while the company itself is doing well, Metro Inc. has in recent years converted some of its stores from the flagship brand Metro to its discount brand, Food Basics.
READ MORE: How a wave of delivery startups are remaking grocery shopping

McCAIN FOODS (#17)
Last year's ranking: 19
The brand has come a long way since the bespectacled kid stole Canadians’ hearts in the iconic Superfries commercial. Certainly, the path to multi-billion dollar success involved weathering some difficult conditions, including a growing distrust of frozen foods in general. But throughout it all, the globally pervasive company with down-home roots has held strong as one of the greatest business success stories in Canada’s collective narrative.

SOBEYS (#15)
Last year's ranking: New for 2017!
With brand love in short supply this year, any gain is notable. But when that gain vaults you straight to number 15 on the list, it merits a closer look. For Sobeys, the explanation certainly isn’t corporate success: its 2013 acquisition of Safeway has been a fiasco, culminating in a $942.6 million loss and the departure of its CEO. Look beyond the boardroom drama, however, and Sobeys has focused effectively on old-fashioned brandbuilding, from its continued partnership with Jamie Oliver’s Food Revolution to the launch of its Joy of Eating Better Foundation in Quebec, to in-store Nutella Cafés. The result: significant improvements in its scores for both community involvement and product quality, proving that, for a grocery brand at least,the way to consumers’ hearts is still through their tummies.

SHOPPERS DRUG MART (#13)
Last year's ranking: 6
As the federal government moves slowly but surely toward the decriminalization of marijuana, Shoppers is looking to stake out its spot in the future market for legal weed. “We’re an industry that is extremely effective at managing controlled substances,” Galen G. Weston, president and executive chairman of Shoppers parent company Loblaw, said in May. That’s not the company’s only strategy for growth, though—in August it bought B.C.-based QHR Corp., a digital medical records company, for $170 million. That should help it stay competitive as medical care increasingly moves into the cloud.


JEAN COUTU (#12)
Last year's ranking: 20
The Quebec-based drugstore chain prides itself on being your friendly, neighbourhood pharmacist. Indeed, the family-run business is a mainstay across the province (and in French communities in New Brunswick and Ontario) where loyal customers favour the simple, low-price goods to competitors’ high-end cosmetics and designer perfumes. It’s a model that’s carried the brand and its 400 plus franchises for three generations, and one mthat CEO, François Jean Coutu is doggedly keen on sticking with.

SAPUTO (#10)
Last year's ranking: 15
Staying on top of the fiercely competitive cheese market is no easy feat. But the family-run company from Quebec has managed to do just that, both in Canada and globally. Recognition and love for the brand has been building for decades in step with each new acquisition and growth phase the company enters into. Today, at $10 billion in revenue and $14 billion market cap, Saputo is not only an omnipresent multinational brand, but one that Canadians are proud to call their own.


LOBLAW (#7)
Last year's ranking: 9
At nearly 100 years old, Canada’s favourite grocery chain isn’t slowing down. Quite the opposite, in fact. From redefining how we think about in-house labels, to stocking drugstores with quality produce, to entering the digital health game, this is a brand that’s managed to spread its influence without ever losing its core identity.
READ MORE: Loblaws illustrates how every company is becoming a software company

How are the rankings created? The list of the 25 Best Brands in Canada is the result of a survey of a nationally representative sample of 1,503 Canadians by Rogers Consumer Insights Team. Performed online in July 2016, the poll sought opinions on five key aspects of a company’s reputation (the quality of its products and/or services; its customer service; its commitment to innovation; community involvement; and the person’s overall view of the brand) from people who profess familiarity with the brands. The individual results are then compiled, based on a weighted ranking of the responses, into a single score for each brand. In order to be considered for the list, a brand must have originated in Canada, have a broad consumer profile and have a significant presence in two or more regions across the country.
Advertisement
Advertisement