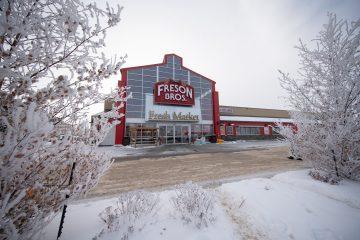 It’s lunchtime, and the 90-seat restaurant in the Fort Saskatchewan, Alta., Freson Bros. grocery store is bustling. Three older men sit together eating lunch, having a beer, laughing and catching up. They don’t look like they’re in any hurry to leave. At another table, two women sip on coffee, chat, and eat icing-covered sourdough cinnamon buns; at another, a dad and his two young kids dig into their fire-cooked pizzas. Everyone glances up from time to time to check out the large TV screens broadcasting a big curling event, the Scotties Tournament of Hearts.

The scene described above is a far cry from the first Freson Bros. (then called Freson Market) that was established in 1955. Opened by Frank Lovsin and Leo Resik, the original store, a butcher shop, was located in Hinton, Alta., a small town that hadn’t even been surveyed yet. Not long after opening, the pair realized that to thrive they would need to expand beyond just selling meat, and were soon stocking produce, baked goods and grocery items.

Today, 65 years later, Freson Bros.—helmed by the Lovsin family with Frank’s three sons, Doug, Ken and Mike, in executive positions—now operates 15 stores throughout Alberta. The Fort Saskatchewan location is the independent chain’s newest, opened in 2018. This 42,500-sq.-ft. store won the Canadian Federation of Independent Grocers’ Gold Award for Top Independent Grocer of the Year (large surface) in 2019, and it exemplifies the rebranding/redesign that’s been underway at Freson Bros. over the past decade.

Designed by Los Angeles-based retail design firm Shook Kelley, the new format was prototyped in 2013 with Freson’s Stony Plain store. The Fort Saskatchewan location is the next evolution. Unique to Fort Saskatchewan, for instance, is the Father Dough Pizza station where thin crust, Italian-style pizzas are cooked in a woodstone oven featuring Freson’s made-in-store sourdough as the crust. Fort Saskatchewan is also the first location to offer beer and wine in the dine-in area, featuring Alberta craft beer from local brewers like Norsemen Brewing Co. and Troubled Monk Brewery.

A focus on local is, in fact, a cornerstone of the Freson Bros. identity. “Our slogan is that we offer a ‘unique Alberta food experience,’” says Doug, stressing that Freson Bros. only sells Alberta beef, pork and chicken in the store and in its restaurant dishes.

“With the Freson Bros. brand, we’ve got some ‘brand felonies’ that we just don’t do,” explains Ken Lovsin, the company’s chief information & marketing officer. “We wouldn’t get beef from outside of Alberta because that’s a brand felony, right? We have some of the best quality protein in the world here and we want to celebrate that.”

They also aim to stock as much Alberta produce as possible, “and in our bakery, we only use Alberta flour,” notes Doug. Alberta-made packaged goods also occupy a lot of space on the shelves at Freson Bros., from craft sodas by Canmore’s Grizzly Paw Soda Company to kombuchas from Alberta companies such as True Buch Kombucha and Wild Tea Kombucha. Sampling stations also tend to feature local offerings: on this day, Calgary-based Jenny’s Delectables offers samples of its Gourmet Stuff’d Potatoes. And the Frank’s Finds kiosk (curated “treasure hunt” type stations where unique products are showcased) also highlights local items. Specialty salsas and tortilla chips from Calgary’s El Gringo, for instance, are featured as Frank’s Finds on the day Canadian Grocer popped in for a visit.

Fostering strong relationships with Alberta suppliers is key to this locally-focused strategy; and it’s these relationships that boost the company’s ability to offer the best in local meat, produce and grocery brands. “A good example is, we deal with a company called Leffers Brothers Organics, a family-based business in southern Alberta,” says Doug. “They have a carrot that’s grown in perfect soil conditions to create Alberta’s sweetest carrot. And we have an absolutely wonderful relationship with that family. We’re well into six, seven years of building strong relationships with them, and it’s the same story with many, many others.”

Among the “store-within-a-store” elements of the new-format store, the Mother Dough Bread Co. grabs attention. In this bakery section, Freson’s now famous sourdough—first created in Stony Plain in 2015 using just flour, water and salt—is used to make a variety of baked goods. “Our ‘mother dough’ is really the foundation of all the yeast products in our bakery ... it’s basically a three-day process to make the Alberta sourdough product,” explains Doug. “We’re very proud that our bakers are fermentation bakers, they understand the art of fermentation.”

The Baker’s Pantry, according to the Lovsins, has become one of the more popular “store-within a-store” features. The section feels like a whole other store, one where shoppers can find all kinds of high-end baking-related products—ranging from chocolate chips, flour and cake toppers to designer oven mitts, aprons and teapots. “It’s a real slow-down zone, where people are inspired by all of the kitchen tools and unique items in there,” says Doug, “so when they go back into their home kitchen, they can create something special for their family.”

In the restaurant, in addition to grabbing a Father Dough Pizza and a local craft beer, other options include the salad bar, a sandwich station, a dessert bar, and the Butcher’s Cookhouse, where customers can order items such as beef on a bun, a quarter chicken, pulled pork, in-store made sausage, and smoked beef short ribs, served alongside a variety of sides including mac & cheese, onion rings, steamed veggies and mashed potatoes. There’s even an all- you-can-eat brunch every Saturday and Sunday featuring pancakes, waffles and French toast (all made from Freson’s own sourdough) and the brand’s signature in-store made sausage.

Freson Bros. has worked hard to make the dine-in area a place where people want to hang out. “Something grocers have to come to terms with is, if you’re going to be a restaurant you need to behave like a restaurant,” explains Doug. “I think in the past, a lot of grocers just put out tables and chairs and thought people would be comfortable sitting there—but we have a restaurant. It doesn’t just look like a grocery store with tables and chairs. People can slow down and feel like they’re eating in a restaurant, because it is a restaurant.”

Doug says the family is also especially proud of how they’ve nurtured the idea of in-store craftsmanship at Freson Bros. “We have everything from Red Seal chefs in our kitchens to cheesemakers to sourdough bread bakers to butchers and smokers and sausage makers,” he says. “We’ve focused on developing this kind of talent and skill to create distinction in our stores. I think maybe where other have removed labour, we’ve focused on developing skill to create distinction in our brand.”

He notes that attracting talent into retail is one of grocery’s biggest challenges these days, as the younger people are often looking for something more glamorous when it comes to work—and “grocery” and “glamour” haven’t traditionally been two words that go together. But with high-quality, artisanal foods increasingly being viewed as “cool” by the younger generation, Freson’s strategy of focusing on craftsmanship is paying off in terms of attracting younger workers. “We’re seeing a resurgence in young peoples’ interest in high-quality meat, produce, baking and cooking,” explains Doug. “So we’re working on helping them develop their skills so they can achieve their own goals, and hopefully those also align with ours.” For too many years, he adds, “with the rush to create efficiency and remove labour from stores, chased away a whole generation of individuals that may have considered working in our industry. I think now we’re bringing them back with their interest in working with high-quality food.”

Until now, Freson Bros. has located its stores in smaller towns and suburbs, but in 2021, a new store in Edmonton is set to open. “This is our first foray into a major metro area,” says Mike Lovsin, chairman & CEO of the company. “That’s a big change for us. We’re excited about it. It’ll be a new chapter for Freson Bros. without a doubt, but it’s a challenge we’re up for.” The Edmonton location will be approximately the same size as the Fort Saskatchewan store, with most of the same features plus a few new twists (but the brothers don’t want to spoil the surprise by revealing those just yet).

They have no doubt the urban crowd will love it. “It continually surprises me when we’re in Edmonton doing business, or talking to people from Edmonton, that they’ve seen our stores, they like what they see, and they’re really excited about having this store in southwest Edmonton,” says Mike. Adds Doug: “I think Edmontonians are really looking forward to some of the products that they can only get at our stores, whether it’s our famous Ivan’s sausage or Alberta sourdough bread, or our 18-hour hardwood-smoked pork ribs.”

While at first glance the 2020 version of Freson Bros. might look unrecognizable to a Freson Market customer from 65 years ago, the heart of the brand is still much the same. “Our dad started this company in 1955 as a small meat market, and the principles that we follow today are the principles that he built and created 65 years ago,” says Mike. Ken agrees: “Our focus on family and our focus on community has remained the same, and will continue to remain the same. As we celebrate our 65th anniversary, we’re very excited to move in new directions and continue to innovate, and to show our customers what we can do to solve the problems they have when they come to us.”

Photography by Roth and Ramberg