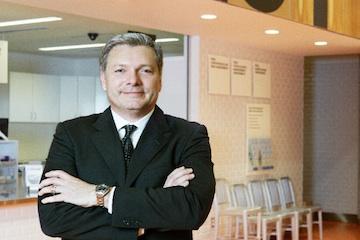 It’s a typical Sunday night at Loblaws Maple Leaf Gardens store in downtown Toronto. Dennis Cho, a 20-something emergency medicine resident at the University of Toronto, is doing his weekly shop.

After picking up a few groceries, Cho wanders into an aisle of vitamins, where he notices a registered dietitian behind a booth. Pausing, he asks her about vitamin D supplements and how to get more fibre in his diet.

The RD springs into action. Standing in front of the store’s massive 50-foot vitamin wall, she points out different ways to take fibre and vitamin D in pill form. Then she turns and gestures to the front of the store, reminding him to stock up on fibre-rich leafy greens and vitamin-D packed cheese–all available in Loblaw’s fresh department.

Welcome to the 21st century supermarket–Loblaw’s style. Canada’s largest grocery retailer isn’t just hoping conversations like the one between Cho and the dietitian happen more often, it’s banking on it. The chain wants to be known as the place to go for health and wellness, and it’s formulating a strategy to make that happen.

As it does so, Loblaw may reinvent the role of the modern-day supermarket in the everyday lives of consumers, and turn the grocery store into what executives at the company believe it may soon become: the centre of health care in Canada.

Loblaw already has a team in place to make it happen. At the helm is Michael Lovsin. Two years ago, Lovsin was given a new title of senior vice-president of health and wellness, and ever since, he’s worked hard to bring the retailer’s health strategy to life.

Loblaw isn’t the only grocery retailer venturing into health care, of course. In the U.S., Whole Foods is toying with opening health resorts. One of America’s largest supermarket operators, Safeway, has gone so far as to declare that it wants to become a wellness company that just happens to sell food.

Even U.S. big-box retailer Walmart is on the bandwagon, offering incentives for people to eat better through savings on healthier foods.

Loblaw itself spelled out its strategy in a long-range corporate social responsibility plan last year when it said the grocery retailer will focus on being “a health and wellness destination for Canadians.” Lovsin feels Loblaw is now comfortably in a place where it can make good on that pledge.

Grocery retailing these days is a tough slog, with differences between stores often measured in pennies. But with boomers getting older, and millennials surprisingly interested in staying fit, experts say health is one area stores can stand apart from the competition.

“That’s a real differentiated position,” says Will Falk, an adjunct professor at the Rotman School of Management and health-care practice leader at PricewaterhouseCoopers in Toronto. He believes that offering customers advice on what foods they should buy is a smart strategy for Loblaw.

Strategy is one thing; execution is another. And it’s the latter that Lovsin admits is Loblaw’s biggest challenge. Fortunately, though, the grocer already has an impressive arsenal of health-related assets.

Lovsin says the key to making Loblaw’s health strategy work is to get all staff in a single store to work in the same direction, by helping customers to make healthier choices.

According to Lovsin, Loblaw research shows three out of four people who start on a path to a healthier lifestyle fall off of it.

“It’s not just about showing, or helping customers, but really getting them to a point where they make the decision to go and make healthier choices. The critical piece is having initiatives, having services, staff and health professionals there to support them and make it easier to achieve health goals,” he says.

Indeed, a recent poll by Ipsos Reid for the Dietitians of Canada found that 63 per cent of Canadians struggle to make healthy food choices in the grocery store at least half of the time.

Loblaw thinks it can help, and one way is through the advice and expertise of its registered dietitians.

“We’re looking at the dietitian to play an important role in the store, helping customers achieve their health goals,” says Lovsin. The RD’s role is seen as being on the “street”–a.k.a., the grocery aisles–leading the way, supporting what Loblaw does across its departments (including pharmacy and optical). “Ultimately, he or she is there to convince more Canadians to put more fresh food in their baskets,” Lovsin says.

READ: Getting closer to their hearts

Dietitians are definitely expected to play a bigger role at Loblaw’s stores. The person in charge of making that happen is Alexis Williams. A registered dietitian, Williams is the grocer’s director of health and wellness, and since she came on board, Loblaw has hired an additional 22 dietitians to work in its stores.

Ultimately, the retailer would like to see a dietitian in each store. “I’ve always felt, as a dietitian, there’s no better place to work ,” Williams says. “I’ve worked in clinical settings, but if customers want to know about kale, you’re here, you can walk them over and sample it. It’s a really nice fit.”

One of Williams’s jobs at Loblaw is to work on a nutrition-rating program called Guiding Stars. Developed seven years ago by Maine-based grocer Hannaford Bros., the program rates food based on nutrient density using a scientific algorithm to assign a one, two or three-star rating–zero stars for bad food, up to three if it’s really good.

Loblaw took on Guiding Stars last summer and just this February began to roll it out in 259 of its stores in Ontario, with plans to make it available nationwide by the end of the year. So far, Guiding Stars has rated more than 30,000 products sold at Loblaw stores.

“We’re working to get information at the time of a product getting listed with us so it’s rated before it hits the shelves,” says Williams. Loblaw is also working with industry standards organization GS1 Canada to make accurate nutrition information available to consumers on apps, such as the MyFitnessPal app, which Williams pulls up on her smartphone.

In addition to rating what’s on shelf, Loblaw is trying to make its own private-label lines healthier, and help customers understand what makes some products better for you than others. The cornerstone of that effort is President’s Choice Blue Menu.

The line, which debuted in 2005 (replacing 1991’s Too Good to Be True line), offers shoppers a range of products low in fat, sugar and calories, but high in fibre and other nutrients. Today, Blue Menu includes more than 450 products, all tested and developed by registered dietitians.

Ian Gordon, senior vice-president of Loblaw brands, says the most important role the brands play is giving consumers choice depending on what their health and wellness needs are.

With that in mind, easy-to-understand green arrows were recently added to Blue Menu’s front of pack. The arrows tell customers what elements have been added (protein, vitamins, minerals) or reduced (calories, sugar, sodium).

Loblaw is also eliminating artificial flavours and colours from all of its President’s Choice products. The work started almost a year ago and will be done by the end of 2013, says Gordon.

Mike Venton is Loblaw’s senior vice-president of fresh food. For the past few years, he’s led the retailer’s efforts to stock more local food in its stores–up to 40 per cent during the summer season. Now he’s also finding ways to get people to buy more produce as a way to stay healthy.

One way to accomplish that is to focus on taste. Venton points to recent initiatives, such as Loblaw’s PC produce “flavour burst” sticker, which calls out items deemed to have superior flavour, such as its PC Blueberries, or PC Plumcots–a cross between a plum and apricot.

Venton is enthusiastic about the idea of bringing dietitians into the fresh department. In March, the grocer sponsored a nutrition month event with the Dietitians of Canada that saw dietitians at some 200 stores offer healthy grocery shopping tips.

Another spoke on Loblaw’s wheel of health and wellness is its pharmacy business. Already, dietitians and pharmacists are working in tandem to help customers. Case in point: during the dietitian event in March, pharmacists were making referrals to dietitians in store.

“We’re able to take the health and wellness strategy one step further because of the food and nutrition element,” says Bobbi Reinholdt, senior vice-president of pharmacy at Loblaw.

Indeed, Loblaw’s pharmacists are uniquely positioned to help customers get started on the path to healthy eating for two reasons. First is sheer numbers: Loblaw has 500 pharmacies in its stores nationwide, giving each store an automatic expert on health issues.

Secondly is pharmacists’ ability to speak to customers at the exact moment they are thinking of health. Reinholdt points out the first question someone asks after being diagnosed with diabetes, for example, is, “What should I eat?”

With the increasing focus on the connection of food to overall health conditions, Dean Miller, vice-president of pharmacy operations, jokes it’s not surprising the retailer’s most recent pharmacists’ conference looked more like a dietitians’ conference. “The connection between pharmacists with dietitians is still early, but it’s a winning formula.”

Meanwhile, Loblaw is forging partnerships with associations that focus on specific medical conditions, including Hypertension Canada, the Canadian Diabetes Association and Anaphylaxis Canada. And store pharmacists are doing risk assessments to identify if customers are at risk of certain diseases that could be prevented by lifestyle changes.

Pharmacists will likely become even more important to both Loblaw and the health-care system overall, as the provinces and Ottawa look to reduce money spent on health care.

“They’re looking at these collaborative care models to break down stereotypes that only doctors can prescribe, only pharmacists can dispense and have broadened it, with a vision of all health-care professionals working together to save on costs,” Miller says.

Dr. Zubin Austin, an Ontario College of Pharmacists research professor in pharmacy practice, says Loblaw is shrewd to build its health-care infrastructure now. He says there are real collaborative opportunities for making the pharmacy the first point of access within primary care.

On the other hand, it’s still in the early days. Mike Sullivan, president of drug-plan management company Cubic Health, says the effects of connecting pharmacy and dietitians remains to be seen. “However, outside of Shoppers Drug Mart, few pan-Canadian pharmacy chains have the scale Loblaw has, so why not leverage the capacity they have in their stores?”

For shoppers like Cho, who walked out of Loblaws with the vitamins the RD had recommended, Loblaw’s health strategy makes complete sense. That should be encouraging to Lovsin as he attempts to turn Loblaw stores into health-care hubs rather than just supermarkets.

“We’re the best and most uniquely positioned to deliver the ultimate one-stop shop in those stores,” he says. “It’s really about how we integrate those assets and maximize the synergy that we believe is going to be there moving forward.”