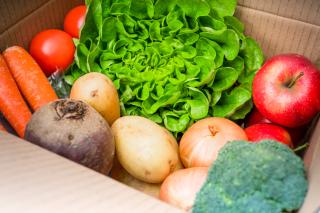 A project that sees fresh vegetables grown and distributed in Northern Manitoba year-round has taken another step forward, as they now have a new way to deliver those veggies to the people and to the community they serve.

In a recent media release, Rocket Greens, an initiative that sees leafy green vegetables grown and distributed year-round in Churchill despite the region's subarctic winter temperatures, announced that thanks to recent donations and funding they have now purchased their own delivery van.

Rocket Greens has been growing vegetables since 2017 using hydroponic gardening inside a heavily insulated shipping container, and the program currently provides between 250 and 400 pieces of affordable fresh produce weekly to residents in Churchill, as well as to two local grocery stores and to the local hospital's cafeteria.

The Churchill Northern Studies Centre (CNSC) operates the Rocket Greens program, and CNSC sustainability coordinator Carley Baftasler said the vehicle would allow for more growth in a program that she said had been a success since they first started growing back in 2017.

"This vehicle is not just an investment in Rocket Greens, it's a testament to the project's longevity and success," Baftasler said.

"We have been growing fresh, locally grown leafy greens year-round for four years, and we are still thriving."

According to Baftasler, Rocket Greens made their first delivery with their new van, and plan to continue using the van to make deliveries, and to improve residents' access to fresh produce in Churchill.

"The new cargo van will allow the Rocket Greens team to distribute the produce more efficiently and reliably in Churchill's challenging conditions," she said.

"It's a major milestone for the sustainable food production initiative."

She added the program is important because for many years it has been difficult and expensive for Churchill residents to get their hands on fresh and affordable produce.

"Food sovereignty has been a long-standing issue in the remote northern town. Even after a substantial government subsidy, fresh food is costly, and residents often find the produce on the grocery store shelves is already wilted or rotten, since it has such a long way to travel before it arrives," she said.

The money used to purchase the van was raised through the Churchill Region Economic Development Fund, as well as through a 2019 fundraising campaign and ongoing donations to the Rocket Greens program.