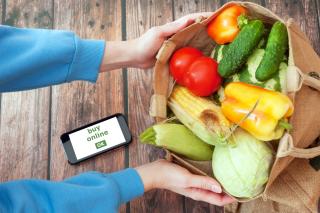 More than half (53%) of Canadians are doing at least some of their grocery shopping online—and an additional 30% said they are open to the idea—but brick-and-mortar remains “king,” according to a new study by research firm Field Agent Canada.

The State of Digital Grocery study found that 97% of respondents continue to shop in a brick-and-mortar store, but many of them use e-commerce as well with 45% shopping online or via app for in-store pickup and/or home delivery, and 38% shopping online or in-app for curbside pick-up.

The findings are based on interviews with 1,000 Canadians across the country conducted between June 3 and June 7.

While Field Agent said the numbers for online grocery are “promising,” it also noted that few shoppers are going “all in”—with only 9% of respondents indicating they make more than half of their purchases online or through an app.

Not surprisingly, shoppers’ willingness to buy online varies widely by product. While 64% of respondents indicated they would be willing to buy a low-risk product like toothpaste, for example, that number fell when asked about products more susceptible to damage or quality issues. Only one-third of respondents said they would be willing to buy milk online, and that number fell to 29% for bananas and 25% for tomatoes.

And while the end of the pandemic is slowly coming into view, the research also found it has permanently changed shopping behaviour—with 91% identifying at least one pandemic-era shopping behaviour they plan to adopt on a permanent or long-term basis.

Asked to identify the reasons preventing them from adopting online shopping on a more regular basis, 64% cited an inability to pick out groceries, just ahead of a perceived inability to take advantage of in-store discounts (63%). More than half (53%) also balked at the extra fees associated with online shopping, while 40% cited concerns about the accuracy of an order.

But the study suggests perhaps the biggest challenge for online grocery services is creating awareness and building customer affinity amid an “ocean” of options. “[S]tanding out from the crowd is the most challenging aspect of online retail for many brands,” it said.