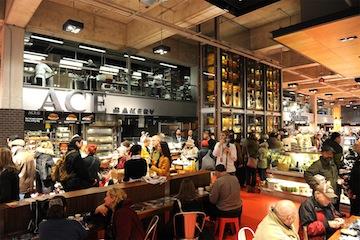 Loblaw’s much-anticipated Maple Leaf Gardens store opened in downtown Toronto Wednesday morning, inside the hockey shrine where the NHL's Maple Leafs won almost all their Stanley Cups, the Beatles and Elvis Presley performed to screaming girls, and Muhammad Ali fought one of his greatest fights.

Four years in the works, the 85,000-square-foot store retains many obvious clues to its hockey history. Plus a few subtle ones.

A giant blue sculpture of a Maple Leaf, made from a jumble of old Gardens seats, greets visitors when they enter.

Meanwhile, down Aisle 25, between a shelf of canned ham and another of soy sauce, a red dot on the floor marks the exact spot of centre ice, where the puck for each Maple Leaf home game between 1931 and 1999 was dropped.

The store marks the first overhaul of Loblaw’s conventional urban store format since the opening of its Queens Quay store in Toronto in 1998.

Weston specifically pointed to the extensive ready-to-eat meals section up front, where nearby condo dwellers, office workers and university students can get a quick dish. He then cited the full produce, meat, seafood and centre store aisles for those doing a full grocery shop.

Up front, the store indeed features several unique counters, each with its own cash register so shoppers can pay for a full meal or just a cupcake without lining up at the main checkouts.

Perhaps the most interesting of these is the 128-foot rectangular home meal replacement counter, known as the Grill.

Rather than serve a wide variety of foods all day, the Grill focuses on the three meals of the day: breakfast, lunch and dinner. So, for instance, shoppers can get eggs and bacon for breakfast in the morning up until around 10:30. Then the counter closes for cleanup and prep, before opening again for lunch.

Al Burke, Loblaw’s senior-vice president of construction, who oversaw building of the store, said the idea of serving meals at specific times of the day creates a restaurant environment, centered around meal occasions. It also avoids a key complaint of many grocery store HMR sections–that in slow periods the food on display sits for too long and therefore appears unappetizing.

All meals in the home meal replacement section are prepared in a second-storey glassed-in commissary that employs 14 chefs. From below, shoppers can watch the chefs in action.

Other distinct up-front sections include an in-store Ace Bakery counter. Bread maker Ace was bought by Loblaw’s parent company, George Weston Limited, a year ago, and for the opening of this store Ace created a new signature bread, a crusty light Italian Pugliese.

Philippe Gaudet, director of marketing, said Ace also put several new products into the store. One is a do-it-yourself kit for shoppers to bake their own Ace bread at home. Another is a jar of the organic honey from Alberta that is a key ingredient in some of Ace’s breads.

Another unique counter is the 88-foot Patisserie. It sells sweet treats such as chocolate, 50 varieties of cupcakes as well as fried doughnuts through a program developed by Loblaw’s Zehrs banner.

Meanwhile, the Tea Emporium counter sells more than 100 different loose-leaf teas, while an 18-foot glassed in cheese wall heralds the cheese counter, where 400 types of cheese are available, including a special Stilton cheese of which there were only a hundred 100-pound wheels made. “And we’ve got three of them at this store,” said Loblaw’s cheese expert Gurth Pretty.

To help shoppers choose the right cheese, Pretty said a cheese pairing pamphlet was put together that suggests which fruits, beer or wine to serve with a particular type of cheese.

Another prepared foods counter is the sushi bar operated by T&T, the Asian supermarket chain that Loblaw purchased a few years ago but that still operates somewhat autonomously. “It’s the first time we’ve really partnered with T&T on something like this,” Burke said.

Also noteworthy is a four-sided merchandising unit inside the wide-open produce department. Each side is devoted to one particular item's many varieties, said Burke. So, for example, one side carries a number of different mushrooms, another side is devoted to many colourful peppers, while the other two sides carry berries and Asian greens.

Burke said the store opted for an apples to apples approach for organic fruits and vegetables. So organic apples are merchandised with regular apples. “We think it’s the way to go rather than having a separate section.”

For those customers who prefer fruits and vegetables in liquid form, the store has a juice bar. Shoppers can mix and match which produce items they want in their drink, paying for the drink based on the size of the cup.

At the butcher’s counter, shoppers can take advantage of a dry-aged beef service. Burke said someone planning a party can order a piece of beef, then have it aged up to 28 days.

The store’s crisp design continues into the centre aisles, where end cap decor consists of a black metal backdrop and a wood border. The black colour gives a nice pop to items on the end cap.

In another unusual merchandising twist, certain end caps are devoted to housewares items that correspond to the foods in those aisle. For instance, bakeware is situated on the end aisle of flour, cake and muffin mixes.

Another interesting feature is the 52-foot Vitamin wall. Interspersed are bold signs in concrete that explain the helpful properties of calcium, zinc and other vitamins. Right beside, a medical clinic employs 11 doctors who are able to set fractures if needed, Burke explained.

A full-time dietitian is also available to speak to customers and give tours on healthy-heart eating and gluten-free products.

Burke said the store has been a long time in the making. The first plans were drawn up three years ago and the intent was to retain some of the heritage of the old Maple Leaf Gardens while also creating a store that caters to both those who want a quick meal and those who need to restock their pantry.

At least one feature of the store was the result of a happy accident. Burke said his design team discovered after the fact that the combination of low-hanging lights and orange floor in the centre aisles created a reddish effect on the unfinished grey concrete ceiling that is rather warm and pleasant, reminiscent somewhat of the burning embers in a campfire.

Store designers also left certain walls unfinished to retain the look of the original Maple Leaf Gardens. Meanwhile, columns down one of the power aisles have drawings that commemorate famous dates in Gardens history, such as the day in 1957 when Elvis played there, the 1964 concert by the Beatles, and the 1966 heavyweight championship slugfest between Muhammad Ali and Canadian George Chuvalo.

In advance of opening day on Wednesday, Loblaw’s billed the store as “Food’s Greatest Stage.” And just like a hot Broadway show, shoppers wanted to see it before anyone else. The first two customers had lined up at 8 o'clock the previous evening–a full 12 hours before the store was set to open.

The doors officially opened after Galen Weston cut through a seven-foot long loaf of bread–the grocery industry equivalent of a ribbon-cutting ceremony. Afterward, Weston, who is familiar to shoppers through a series of President’s Choice TV commercials, chatted with customers in the store, posing with several for photos.

Burke said another urban Loblaws store that is opening in Toronto’s west end (Queen and Portland Streets) later this week will have the same look as the Maple Leaf Gardens store, albeit without the hockey cues.