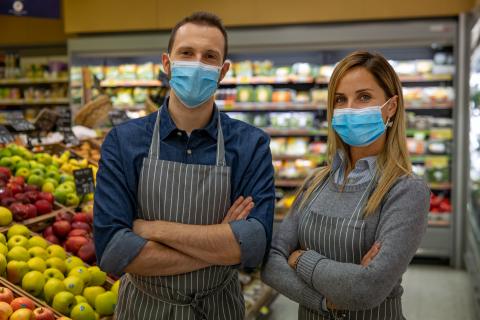 Most mask mandates are coming to end in Ontario next week, but don’t expect them to entirely disappear from grocery stores just yet.

As of March 21, people in most indoor settings in Ontario, including grocery stores, pharmacies and restaurants, will no longer have to wear a mask. Mask mandates in settings such as public transit, hospitals and long-term care homes will lift on April 27. The Ministry of Health has said individual employers may keep mandatory masking policies in place if they so choose to.

However, even if masks aren’t mandatory, most employees (and some customers) will likely continue to mask up. And grocers aren’t about to give up other safety measures put in place during the COVID-19 pandemic.

The Retail Council of Canada recently conducted a survey to get a read on how its members will handle the unwinding of mandatory public health requirements in Ontario. It found that all retailers will support staff if they choose to wear masks even if they’re not required to. Many retailers will maintain messaging, such as signs, indicating that customers may continue to wear masks, but they’re not required to do so. Many will also continue to provide sanitizers and other health and safety tools, such as Plexiglass shields at cash desks, as a way to continue providing added protection to their employees and customers.

Christy McMullen, co-owner of Toronto’s Summerhill Market is one independent grocery retailer who’s on board with keeping some safety measures in place. While she says she’s “relieved and excited” for the mask mandate to be ending, Summerhill Market “will continue offering masks, gloves, and hand sanitizer to customers and staff who would like it, as well as social distancing for staff, our updated cleaning protocols, and the Plexiglass at the cash register.”

She notes that while some customers and employees will be nervous about going maskless to start, they can continue to wear masks if they prefer. “The vaccination rate amongst my staff is about 98%, and customers who are concerned will have online shopping available to them, or we can offer N95 masks to them,” says McMullen.

In a statement to Canadian Grocer from Walmart Canada, the retailer said the safety of its associates and customers is a top priority. “From time to time, we modify our practices and procedures to ensure they are consistent with current provincial and public health requirements,” the statement read. “Walmart Canada will be modifying our mask policy to align with current provincial guidelines. In Ontario as of March 21, the decision to wear a mask is up to the discretion of our associates and customers. We will continue making masks available to our associates, as we strongly recommend that they wear them.”

Gary Sands, vice-president of government relations at the Canadian Federation of Independent Grocers (CFIG), believes grocers will do whatever they can to support staff members who choose to continue to wear masks. “Many are communicating the same messaging: that people can continue to wear masks, if they so desire,” he says. “It’s obviously a matter of individual choice.”

CFIG is supportive of the government’s decision, as Sands says the organization “has been following the guidance of governments on this... which we assume is always based on the best information they have from their science table.”

“The fact that governments are saying the mask mandates are no longer required is a sign that at least we’re seeing the light at the end of the tunnel,” adds Sands. “So that’s a good thing.”

One issue CFIG raised, however, was around timing. “We’re in a bit of a limbo right now because when the government signals well beforehand that they’re ending mask mandates, a lot of individuals will take it upon themselves to unilaterally end their own mask mandate—now,” says Sands. “That can put the retailer in a difficult spot because the regulation hasn’t yet changed.”

CFIG recommended to the Ontario government that it make the announcement as close as possible to the date the mandate is lifted. “We made that recommendation based on what we heard from retailers, unfortunately to no avail,” says Sands.

One question is, after two years of wearing masks in retail settings, will they be that easy for people to give up? For the most part yes, according to Steve Joordens, a professor of psychology at the University of Toronto Scarborough. He calls it “the great snapback.”

“The way we behaved pre-pandemic was a very natural way for us to behave and there are two forces at play,” says Joordens. “One is we’re very social people. We’re the most social animals on the planet, and so we’re used to interacting with each other and all the non-verbal cues are a big part of that... where we can see someone’s face, we can see their eyes, we can see their mouth. And that’s the way our brain likes things to be.”

Secondly, he says, most people have decades and decades of behaving in a certain way in a grocery store setting. Joordens uses the analogy of a five-year old, which is the emotional, primitive part of the brain (the limbic system) that wants to behave like it always has. The frontal lobes, meanwhile, are like the nanny who’s been saying it’s not safe and you must wear a mask.

“Now the nanny has been taken out of the picture a little bit. People are saying it’s safe out there, politicians are starting to pull back all these restrictions, and suddenly the nanny is losing all of her clout to keep the five year old under wraps,” says Joordens.

Though there may be some trepidation at first, Joordens says most people (aside from those who have real fear) will snap back quickly to how they behaved pre-pandemic. That said, it will likely be a different story for those on the frontlines who, for two years, have been told they're in the line of fire, says Joordens.

“I don’t know how quickly they will snap back. They have to have a relatively close interaction with everybody who comes through their checkout,” says Joordens. “So, I wouldn’t be surprised that we see them being much more cautious much longer, potentially continuing to wear masks. And I don’t think it would be a bad idea for grocery stores to keep the Plexiglass up for a while.”