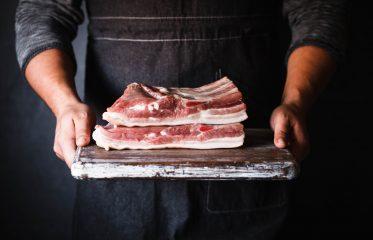 With all the talk these days about the rise of veganism, vegetarianism and flexitarianism, not to mention last year’s new edition of the Canada’s Food Guide strongly encouraging Canadians to add more plant-based proteins to their diets, one might wonder: how’s meat doing?

As it turns out, meat is doing just fine. Sure, numerous studies will confirm consumers want to curb their meat intake, among them a late-2018 Dalhousie University report that revealed more than half of Canadians are willing to cut back on how much meat they eat, with nearly 24% saying they would probably do so within the next six months. But “cutting back” is a relative term, and Canadians clearly still love meat. Recent Nielsen data shows beef sales rose by 0.5% to nearly $2.8 billion in the latest 52 weeks ending Feb. 29, 2020, while chicken sales were up 2.1% to almost $2.2 billion. Overall, pork may have dropped by 2.2% to $968.5 million, but ham (pork from the hind leg, typically salted, cured or smoked) is up by 6.7% to more than $109.2 million.

That said, the features consumers are seeking in meat continue to evolve and include a growing desire for sustainability. In a recent sustainability-related report, Mintel found “attitudes around looking to cut back on meat consumption for environmental reasons were higher among younger consumers,” says Joel Gregoire, Mintel’s associate director, food & drink, Canada. “What this tells me is that for the meat industry, that focus on sustainability —younger people are getting that sustainability message, and if you’re in the meat business, this needs to be part of your brand, this needs to be part of what you’re saying.”

Gregoire points to Maple Leaf Foods as an example of a meat company that’s getting its sustainability strategy right. “Maple Leaf is a great example, with its campaign about going carbon neutral,” he says, referring to the company’s late 2019 announcement that it would be aggressively reducing its greenhouse gas emissions.

Even prior to that announcement, Maple Leaf was forging a strong sustainability path, having implemented “sustainable meat principles’’ a number of years ago “which have helped guide our company in addressing the broad societal and environmental impacts of animal protein production,” explains Tim Faveri, Maple Leaf’s vice-president of sustainability and shared value. “More and more, consumers want to know the products they are purchasing have been produced and manufactured with minimal environmental impacts.”

Similarly, humane treatment and “clean” claims (including organic) have become a higher priority among many meat consumers in recent years. “With the amount of information available online, people are far more conscious about what they’re eating, with the majority of grocery stores evolving to have either a section of their meat department dedicated to naturally raised meats and organics, or even as their sole meat offerings,” says Cynthia Beretta, co-founder of Beretta Farms in King City, Ont. She notes that products featuring ethical, organic, natural and sustainable claims are no longer limited to certain independent retailers, but have become more prevalent at chains, too, and are growing not only in terms of the number of stores carrying them, but the shelf space they are occupying as well.

Local is another important attribute for many consumers. “Our members have been loud and clear that they want to support local,” says James Lelonde, Calgary Co-op’s meat category director. To satisfy this desire, he says, “We have just launched our ‘only-Alberta’ program in our meat departments with beef, chicken and lamb that are 100% Alberta .” And as part of its new Cal & Gary’s private-label brand, Calgary Co-op also offers premium pork, organic chicken, flavour-locked-in AAA beef and AAA halal beef, all locally raised, he says.

CUTTING TO THE CHASE
But the evolution of the meat department isn’t just about the addition of bigger-picture features like sustainability, local and organic—there are also a lot of interesting things happening with cuts. Lelonde says at Calgary Co-op, tomahawk rib steaks, inside skirt steaks and flat iron steaks are some of the unique cuts the retailer has been offering in its AAA beef program.

“There are some really cool, innovative items; you’ve seen the tomahawk, for instance,” says Derrick Ash, director of retail channel marketing for Canada Beef, referring to the trendy tomahawk rib-eye steak, which is a cut of beef ribeye with an extended rib bone, mostly for presentation purposes. “It’s a head turner—it’s going to provide the animation at store level, and it’s going to provide the entertainment value when it comes to cooking it at home.”

Ash also points to the brisket, a cut of meat from the breast or lower chest, as another one that’s trending (although it seems to be more popular in the United States, it is gaining traction in Canada, he says). “It’s a gorgeous piece of meat, but how do you properly cook it?” he says, noting that while baby boomers might be familiar with how to cook a brisket, it’s certainly not something younger folks would know how to tackle, especially the millennials and gen Z. “Retailers have a huge opportunity to educate those generations,” he says.

Canada Beef has plenty of educational tools that are available to grocers. Ash says providing information is important as uninformed shoppers could end up choosing a particular cut of meat that might look good in the package, but if they take it home and cook it incorrectly, it won’t perform well. In the end, they'll think the meat wasn’t good quality when really, they were just using the wrong cooking method, he explains.

Part of this education can be simply achieved through well-organized merchandising. “If I know I’m turning on my grill, I want a grilling section. I want all of the middle cut meats, the grilling steaks, all in one four-foot vertically blocked section,” he says. “Next to that I want my simmering steaks. It’s a totally different cooking process. And next to that, I want my marinating section.” If you can organize your meats according to cooking style—grilling, simmering or marinating—that’s a great first step to helping your customer who might not have cooking expertise to be able to make a great meal, he explains. “It's critically important to set the consumer up for success," while at the same time providing an offer that gives you a competitive point of differentiation.

Mosser describes an example of a “Japanese-inspired” merchandising program Canada Pork has developed for retailers to introduce thin-sliced specialties to Canadian consumers. “In the program, innovative cooking and preparation information is available to consumers for three specialties: yakiniku barbecue, shabu shabu hot pot, and ginger pork shogayaki,” he says. “The program is an opportunity to expand pork product assortment at retail by promoting underutilized and innovative premium-quality Canadian pork cuts like pork belly, jowl, boneless capicola shoulder and others. New product ideas like this can be leveraged by retailers to boost sales and offer consumers something exciting and completely new.”

PROTEIN BY ANY OTHER NAME
While animal-based protein is not going away any time soon, there’s no denying the movement to eat less meat is impacting what traditional meat departments look like. According to Mintel’s Gregoire, the most influential group here is not actually the vegetarians or vegans, it’s the flexitarians: people who aim to eat a mostly plant-based diet, but also still eat meat. “There’s kind of a notion that there’s a lot of vegetarians and vegans out there, but the data doesn’t really show that,” says Gregoire. According to a 2019 Mintel report, about 5% of Canadians identify as vegetarians and only 2% identify as vegans, but about a quarter (25%) of Canadians are flexitarians.

Plant-based “meats” from companies like Beyond Meat, Lightlife and Field Roast (the latter two have been acquired by Maple Leaf) burst on the scene in the last few years, offering items like meatless burgers (with the same look and taste as regular burgers), as well as meatless sausages, chicken, ground beef substitutes and more. Not surprisingly, these types of products have been a hit among flexitarians. “We are seeing more people interested in a balanced diet that includes both animal protein products and plant-based items, which has expanded the category beyond vegetarian and vegan consumers,” explains Maple Leaf’s Faveri.

Because many of the plant-based protein innovations are so new, there’s been some debate as to where they belong in the store. Beyond Meat was one of the first to say meat alternatives belong in the meat department alongside the regular burgers, sausages and the like. As California-based Beyond Meat’s chief growth officer, Chuck Muth, explains, “part of our strategy to democratize plant-based protein and bring it from niche to mainstream has been to meet the consumers where they’re already shopping for their protein.”

In the past, he says, veggie burgers and other early plant-based proteins were sold in the freezer section, often near unrelated items like ice cream. “This was a hurdle we identified early on that needed to be overcome if we wanted to attract mainstream adoption, as the average meat-eating consumer isn’t looking for protein near the ice cream. By entering the refrigerated meat case, we’ve been able to easily reach our target consumer where they shop for their protein options.”

While Calgary Co-op does include meat alternatives like Beyond Meat and Lightlife products in the fresh meat counter and will continue to do so, it has also recently adopted a new strategy. “We’ve decided to take this alternative protein category and make it a destination in our stores,” says Lelonde, adding that he’s referring mainly to “the offerings that replace the centre portion of your plate” in alternative meats.

“We’ve decided to pull the product from the produce section and build displays in between the produce and meat departments. So when the customer finishes his or her shopping in produce, they come around the corner and they have the offering of all alternative proteins in a one-stop shop,” he says. They did this because they felt these products didn’t quite belong in produce, but offering them only in the meat department could alienate vegetarians. So far, it’s been a successful strategy. “We are seeing large increases in this category, and we only began this roughly about four to six months ago.”

That said, Lelonde can envision a day when it’s all one big protein section. “I think our industry is going to be moving from a meat department to a protein department. That’s what I feel the meat department should be called."

This article appeared in Canadian Grocer‘s May 2020 issue.