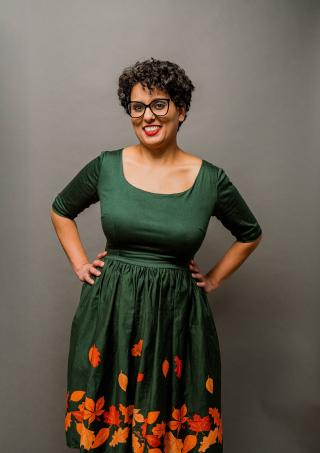 Shivani Dhamija, founder of Halifax-based Shivani’s Kitchen, didn’t learn to cook until she left home for university. “I was that student who would call their mom and ask, ‘I have added the dal, how much water should I add?’” says Dhamija. “It took me three years to make an okay dish everyone could tolerate.”

Late blooming aside, Dhamija has fond food memories from her childhood in a small town in India shopping at the bazaar with her mother, buying everything fresh: produce, chicken, eggs. And her mom and aunts were always cooking at home, using classic Indian spice blends.

“When I was young, my mom would buy bulk spices from a wholesaler,” recalls Dhamija. “I would ask her, ‘why are you not just buying a chana masala packet? Every time you make chickpea curry, you’re making a fresh blend.’ And she would say, ‘I don’t know what they’re adding. I’m not going to buy that.’”

Her mother’s passion for quality ingredients inspired Dhamija’s approach to her food business, which produces a line of authentic Indian spice blends in six varieties: butter chicken, curry, tandoori, vindaloo, chai and garam masala. The spice blends are 100% natural and contain no filler like garlic, ginger or salt.

In Canada, she tried different brands of Indian sauces and felt they were too tangy compared to what she’d make at home. For the Shivani’s Kitchen lineup, “We make my homestyle sauce and as soon as they are made, we freeze them in tubs because they have no preservatives,” she says. “I’m no professional chef—I’m just a consumer who wants their products to be great quality.”

While Dhamija has found a recipe for success in the food business, it’s not a career path she envisioned. In India, Dhamija got her BA in sociology and went on to study public relations. In 2011, she moved to Canada, enrolling in the PR program at Fanshawe College in London, Ont. After graduating, she moved to Halifax, but couldn’t find a job in her field. So, she got a customer service job at a recreation and sports centre.

While working there, Dhamija was asked by a friend if she could make Indian food for her brother, who was missing food from home. That sparked the idea to launch an Indian meal-delivery service in 2014, which Dhamija ran for four years under the name Shivani’s Kitchen.

Along with the meal-delivery business, Dhamija held cooking classes. Her students would ask where she got her spices, as they had trouble finding them. (Answer: India and Toronto, always buying in bulk and blending them herself.) Dhamija sensed a new opportunity. “There is a need and a demand for Indian spices as people are looking for new food and cooking experiences,” she says.

Dhamija began selling her spice blends to her cooking class patrons and then at farmers markets. In 2018, she opened a takeout restaurant at Seaport Farmers’ Market, a popular Halifax tourist spot. Dhamija wasn’t looking to get into the restaurant business: The market wanted to give her a permanent spot, but an $80,000 investment was needed for the space; she’d have to sell more than spices.

The location gave Dhamija the space to run the restaurant business and produce a retail product line. In 2019, Sobeys became the first major retail partner for Shivani’s Kitchen, selling the spices at its Halifax stores. However, Dhamija would soon have to pivot yet again. When the pandemic hit, suddenly “there were no cruises, there were no tourists and we were very far from the locals,” explains Dhamija, who had to close the restaurant. “Those times were very hard.”

Dhamija’s next move was born out of necessity but also her tenaciousness. “I think I have a bug in me that I don’t give up,” she says. “And whatever opportunity is there, I grab it.”

Dhamija poured her efforts into her spice and sauce business, opening a production plant near Windsor, N.S. The products are now sold in Sobeys, Foodland and Supercentrestores throughout Atlantic Canada, at a growing number of natural grocers in Ontario, and online in Canada and the United States. The plan is to export the Shivani’s Kitchen lineup across North America in the next two years. The company recently developed paneer for grocers’ HMR offer and is launching a line of ready-to-eat meals.

Although her path has taken her in different directions and has had its difficulties, Dhamija is not easily discouraged. “I love challenges,” she says. “That’s probably one of the reasons why I’m here.”