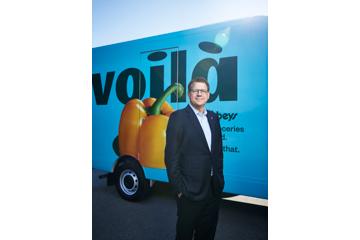 Empire delivered mostly positive first-quarter fiscal 2022 results on Thursday morning, but Medline says the company’s achievements—some of which have been years in the making—have been downplayed because of COVID and the focus on year-over-year results.

“Retail is detail and it’s a bunch of different things coming through to put us in this position where we are so much stronger and I'm sick of talking about COVID for many reasons, but one reason is … I think it's overshadowing the huge change at Empire Company that we've seen, and that will shine through very, very soon,” said Medline during a call with analysts.

Medline pointed to the launch of its e-commerce service Voilà, store renovations, more effective merchandising, cost savings recognized through Project Horizon and market share gains in Ontario as some of the ways the company has improved over the last few years. “We’ve gone from zero to hero in a very short time,” he said.

Empire, which owns the Sobeys, FreshCo and Farm Boy banners, said sales during the 13-week period totalled $7.6 billion, up from nearly $7.4 billion in the same quarter last year, boosted by the acquisition of Longo's and higher fuel sales due to increased fuel prices and consumption. Same-store sales were down 0.5% for the quarter, while same-store sales, excluding fuel, were down 2.2%.

At the onset of the pandemic, if Canadians weren’t ordering their groceries online they opted for a one-stop shop to reduce trips to the grocery store, typically at a conventional banner.

With vaccination rates on the rise and an easing of restrictions, competitors Metro and Loblaw have recently noted a gradual return to discount. Medline, however, feels these observations are overblown.

“I think people talk too much about the difference between conventional and discount, that's not the main driver here,” he said. “The main driver is customer behaviour and trips to the grocery store and basket size. It's not so much conventional [versus] discount.”

One area of Empire’s growth that is inextricably linked to COVID is the success of Voilà—the home delivery service the company launched in June 2020 as pandemic-related demand in Canada soared.

Empire’s e-grocery offering has since been buoyed by its acquisition of Longo’s and its Grocery Gateway service as well as the introduction of Voilà click and collect in parts of the country. (The company said curbside pickup would be added to 85 additional stores in fiscal 2022.)

Medline said the company’s e-commerce sales for the quarter were substantial and real-time data along with customer service was helping to attract and retain new customers to the Sobeys brand.

“We're not getting customers because they used to or shop Sobeys,” he said. “We're getting it because of the brand standing for customer service, greater assortment, good pricing and people getting turned on to Voilà as a real option in their shopping, in addition to what they are doing in bricks-and-mortar stores.”