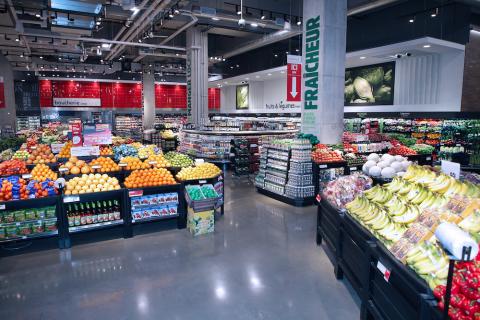 Metro has invested more than $10 million to open the nearly 40,000-square-foot Metro Plus Wilderton in midtown Montreal, replacing a Metro supermarket on the site that had been closed for more than three years.

The new store is more than 50% larger than the 26,337-square-foot store that once anchored the 1960s-era Wilderton Shopping Centre on Van Horne Ave. in the Côte-des-Neiges neighbourhood, near Outremont.

The shopping centre was razed and redeveloped by First Capital into a mixed-use structure that includes a seniors’ residence directly above the new Metro. Free underground parking is available for Metro customers.

“The pandemic played a role in delaying the store’s opening by a year,” says Geneviève Grégoire, communication manager at Metro.

Finding employees was “a constant challenge,” she adds, but the new store’s team is now complete with about 130 employees, compared to the 90 the former store had in 2019. 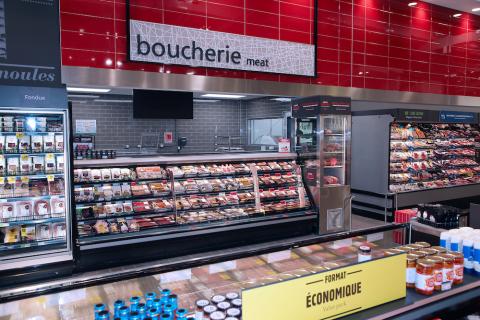 Among its features is a fish smoker at the fish counter and a bulk seafood bar. However, because of the pandemic, fish is currently sold only in a pre-packaged format, Grégoire says.

The new store is only the second after the Metro Plus Ville Mont-Royal in Montreal to offer caviar at the fish counter.

There is also a kosher section that includes refrigerated meat, a 16-foot bulk nuts section, a vegan section and a butcher’s department that includes smoked, organic and ready-to-cook meat.

Over 100 ready-to-eat meals are prepared on-site, including shish taouk (shawarma) from Adonis, the grocery chain that is majority-owned by Metro.

There is also a large variety of local, ethnic, gluten-free and organic fare throughout the store, baked goods from Metro-owned Première Moisson and a full selection of craft beer.

Of the 199 Metros in Quebec, 120 are now under the Metro Plus banner, which are larger and have more variety and services than regular Metros, Grégoire says.