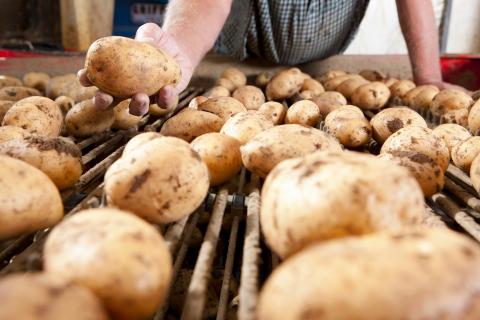 The federal agriculture minister is optimistic the United States could approve the resumption of shipments of Prince Edward Island potatoes to the key market of Puerto Rico within weeks.

Marie-Claude Bibeau and Island MP Lawrence MacAulay met with U.S. officials in Washington Thursday to discuss the ban imposed by Canada on exports of the potatoes in November following the discovery of potato wart in two P.E.I. fields.

The fungal parasite spreads through the movement of infected potatoes, soil and farm equipment and poses no threat to human health but leaves the potatoes disfigured and can greatly decrease crop yields.

"I'm very optimistic," Bibeau said in an interview Friday. "It went very well. We got the best outcome we could at this point in time."

Puerto Rico usually gets 80% to 85% of its potatoes from Prince Edward Island, representing about a quarter of the province's exports to the United States.

"These potatoes come from fields that are not known for ever having potato wart. Then the potatoes are washed, brushed, graded, given a visual inspection and then they are treated with a sprout inhibitor," she said.

Originally, the U.S. Department of Agriculture and Animal and Plant Health Inspection Service (APHIS) were going to conduct a thorough investigation of both table-stock and seed potatoes from P.E.I.—a process that some officials estimated could take until 2023 to complete.

"Having the head of APHIS around the table yesterday, I think brought a message that they were in solution mode. They were there to find a solution to this situation," Bibeau said.

However the minister said the investigation into seed potatoes would take longer and would involve the examination of about 35,000 soil samples.

Canada banned shipments of P.E.I. fresh potatoes to the U.S. on Nov. 22. At the time, Bibeau said if Canada had not issued the suspension voluntarily, the Americans would have imposed their own ban. Subsequently the U.S. decided to block imports until Canada provides the technical data to show the potatoes are safe.

Greg Donald, general manager of the P.E.I. Potato Board, said the ban was in its 10th week and losses to farmers are around $25 million dollars so far, but Thursday's meeting had provided a glimmer of hope.

"At least there's a timeline. We want to hold them accountable to those timelines, because this never should have happened, and it shouldn't have continued as long as it has," Donald said Friday.

He said if there is a favourable decision concerning Puerto Rico, it would take some time for farmers to get shipments ready. He said the potatoes have to be trucked to Halifax for shipments that depart each Monday.

"As soon as there's any indication, they're going to get geared up and get potatoes loaded, ready and waiting. That does take a few days," he said.

Donald said so far, Island farmers have avoided having to destroy any potatoes in storage. Instead they've been looking for new markets and have sent potatoes to food banks across the country.

The P.E.I. Potato Board is working with two of the biggest food bank organizations in Canada, with funding through the federal Agriculture Department.

Board marketing specialist Mark Phillips said Food Banks Canada and Second Harvest would work to distribute the potatoes through their national networks. The federal funding covers the cost of buying and transporting the potatoes. Phillips said the price paid to farmers was below market value.

"It's a small bright spot in a pretty dark time, so it's pretty great for people to put all the effort in to make this happen," Phillips said during a recent interview. "It is certainly helping lift the spirits of growers and keeping some money flowing (where) it might otherwise not be."