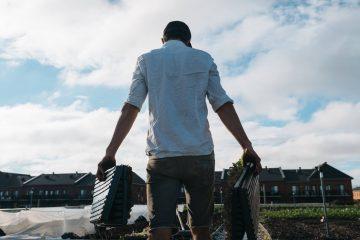 An IGA supermarket in the Montreal borough of Saint-Laurent is taking buying local to a whole new level – its rooftop.

Richard Duchemin, co-owner of the IGA Extra Famille Duchemin, says his grocery is the first in Canada to sell produce that’s grown on its roof. About 35 types of produce are being grown in the 25,000-sq.-ft. rooftop garden -- about half the total roof area.

“Our customers have been increasingly asking us to sell local products,” says Duchemin. “You can’t get much more local than what we’re doing now, with vegetables growing 20 feet above our heads that we harvest every day.”

In addition, two TV screens placed next to the produce broadcast the message “live from the roof” and show images of the rooftop garden’s progress.

The garden is irrigated with water from the store’s dehumidifier that would otherwise go to waste and is being cultivated by La LigneVerte (The Green Line), the company that installed the rooftop garden. La LigneVerte says the garden cost approximately $250,000 to install, though Duchemin declined to confirm an amount.

As well, there are eight bee hives on the roof, managed by urban beekeepers Alvéole, and the honey will be sold in-store.

Duchemin says the idea for the rooftop garden came when St-Laurent required the grocer install a green roof on the 52,000-sq.-ft. store. (The family grocer opened its new locale last year after operating a smaller store nearby for 32 years).

“Fifty per cent of the roof had to be green. We decided to take that not as a constraint, but as an opportunity and to push the project further by growing vegetables on the roof.”

Duchemin says he is proud of the rooftop garden and hopes it sets an example for other grocers. “We’re a bit avant-garde. But the future is here.”

Public tours of the rooftop garden are scheduled to begin soon.