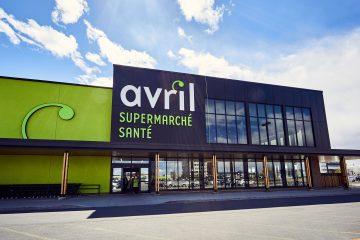 Customers need only look up when they enter the Avril Supermarché Santé in Laval, Que. to determine they’re in no ordinary grocery store.

Once they do, they’ll see an automated vertical farming platform with multiple superimposed trays on which a number of microgreen varieties grow in-store. Grown year-round, the microgreens are for sale at the store and used at the in-house restaurant.

Avril is the first Quebec retailer to create the suspended greenhouse. The goal “was to give customers an experience” and to overcome the “freshness challenge” of microgreens, says co-founder and co-owner Rolland Tanguay. It’s just one of the ways the natural and organic grocer is differentiating itself from its mainstream competition.

Located in suburban Montreal’s Centre Laval shopping mall in a space formerly occupied by Target, the 44,000-sq.-ft. store, which opened last year, is Avril’s eighth and biggest yet. The store’s inspired design has also been racking up awards from the likes of U.S.-based Retail Design Institute and PID, a design promotion agency.

Avril has come a long way from the tiny, 1,000- sq.-ft. store Tanguay and his partner and wife Sylvie Senay opened in Granby, Que., 24 years ago. Back then the store was called Panier Santé (health basket). By the time they were ready to launch a second location, its founders were seeking a more original and free-spirited name for the stores, so they hired a communication firm to come up with one. The Avril name (April in English) “evokes springtime and renewal,” Tanguay explains. “We couldn’t have a better name. Everybody remembers it.”

Avril Supermarché Santé co-owner Rolland Tanguay and his partner and wife Sylvie Senay.
But as the business approached its 10-year mark, Tanguay recalls that Quebecers had become much more interested and knowledgeable about organic food. And today, the appetite for organics continues to grow. The independent grocer has plans to open one new store a year and “we could open stores every week, there’s so much demand,” says Tanguay.

The Laval store is about double the size of a typical Avril location and represents a $10-million investment for the company, which generates $130 million in annual sales.

Tanguay says 10% of the store’s cost went toward research and development for the impressive vertical farm. “It was a bit challenging to build it. It was quite a process to start from zero and to create a finished product.” However, the greenhouse is a big hit with customers and has contributed to an excellent in-store ambience, he says.

The Laval location represents a new concept for the retailer, one that took three years to create. “We entirely changed the furniture, the lighting, the restaurant,” explains Tanguay. “It took several consultants in restaurants, design and lighting to create a model that will serve for the next 10 years.”

Aside from the vertical farming platform, the biggest difference from the chain’s other stores is the 130-seat “grocerant,” which also features a patio with 48 seats for customers to enjoy in the warmer months. “It’s an important step in our growth strategy.” The restaurant features vegetarian fare, pizza, roasted chicken and more—all organic and all made in-store. “It’s rare for a grocery to have this,” says Tanguay. But he sees investments in these areas now are key, believing that in the coming years the battle at grocery stores will be won with in-store restaurants, ready-to-eat fare and house brands.

Located close to the Laurentian Autoroute (Highway 15), the restaurant fills up quickly at lunch-time. “That’s how we’ll succeed. We’ve created an atmosphere where you feel good. Even when it’s full, you can hear one another talk.”

From top to bottom, the bright, airy store is all about the special details, from its electronic shelf labels to LED lighting and heated vinyl flooring that looks like hardwood. The floors are heated entirely with energy generated from the store’s refrigeration system. “It provides customers with comfort in the winter and helps control humidity in store.”

At the exit, the store has established a single lineup system at the cash where waiting customers are directed to the first available of the nine cash registers. “It’s the best system,” says Tanguay, noting it’s proven so efficient that it will be instituted across all of the locations.

Tanguay says organic fare at Avril costs less than it does at competing stores. “We’re the biggest buyer of organic fruits and vegetables in Quebec,” he says. “Quality products with very competitive prices—that’s our battlefront.”

The Laval store is the first to have a fresh fish counter, featuring sustainably sourced fish. Gelato and dessert counters are also new features, with gelato made using traditional Italian techniques and gluten-free pastries among the offerings.

While the store sells chicken, there is no butcher shop. “It’s less and less a trend,” Tanguay says. “When I was young, we ate meat five times a day. Today, I
eat it maybe once a week.”

Tanguay says expectations for the Laval store were conservative but have been easily surpassed. The outlet is Avril’s best performer. Avril’s next store, scheduled to open next year at Promenades Saint-Bruno on the South Shore of Montreal, will be the same size as the Laval store.

Avril has yet to open on the island of Montreal, with Tanguay citing the city’s high taxes, lack of parking and proximity of the Laval and South Shore stores as reasons. However, he insists Montreal will have an Avril store within the next five years. Avril will likely open one new store in Quebec annually for the next five years and will then look to the Ontario market (with Ottawa being the first target).

The fact Senay and Tanguay maintain 100% ownership of Avril is key to its success, he says. “We’re two people with different qualities. My wife is very customer service , very public, a perfectionist, detail-oriented. I’m an entrepreneur, a bit of a visionary. When you put it together, it makes for a recipe that you can’t recreate. I think that’s the Avril secret—the combination of our two characters, our two strengths.”