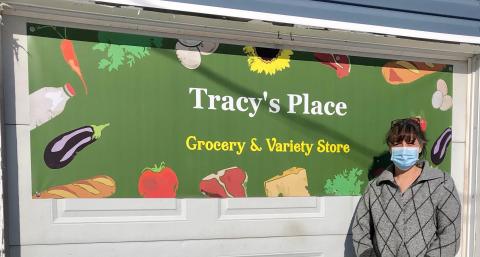 "When I was getting ready (to open), I was shaking and started to panic. But I think it was just building up to this and finally opening that it just hit me,'' said the store's owner Tracy Harnack. "I was like, 'OMG, it's happening. Finally.'''

At first, she was thinking of opening a restaurant. When Harnack lost her job a year ago, she didn't know what to do and she didn't want to travel to work.

"We don't have grocery stores here on the First Nation. We have a Mattagami Smoke Shop and they have a few items,'' she said. "Here, I'm trying to provide everything.''

Harnack gets her supplies from Timmins. She said she will probably have to shop for supplies at least once a week.

"I don't want to overcharge, I don't want ridiculous amounts just because we live on the First Nation,'' she said. "I try to look for deals and then (customers) can have a deal as well when they shop here.''

Because Mattagami members are only allowed to leave for essential reasons twice a week for a five-hour limit, getting supplies for the store has been challenging.

"It takes a little over two hours there and back, which only leaves us with three hours,'' she said. "I even ordered some stuff for curbside and I waited half an hour just to get it delivered to the car. That's one of the biggest challenges I find: being able to get the supplies.''

The response from community members on the store's Facebook page has been positive, Harnack said. Several customers have stopped by and "a good amount'' has been sold since the store opened doors Tuesday morning.

She has started taking suggestions from customers on what they'd like to see sold in the future. Some of their suggestions included items like car oil, brake fluid, more bananas and avocados and chip dips, she said.

Moving forward, Harnack wants to sell fresh meat at the store. She also wants to eventually expand and offer takeout of homemade meals like soups, burgers, salads and home fries, but that won't happen for a while yet, she said.