An online shopping site launched in the U.S. last week, promising to disrupt the consumer packaged goods category by saving consumers from what it calls the “brand tax.”

Brandless, which isn’t delivering to Canada at launch, offers an assortment of more than 115 unbranded products in food, beauty, personal care and housewares, all for just $3 or less.

The food offering is mostly basic non-perishables from jams, condiments and oils to pasta, rice, grains and beans as well as some “quick prep meals” like “organic shells and yellow cheddar” (which we guess is Mac & Cheese). 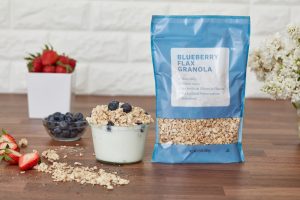 The company says its products are all of the “highest quality,” but much cheaper than most retailers because of its direct-to-consumer model that strips out middle-men price increases and, most importantly, everything is unbranded.

Brandless claims the average consumer pays 40% more for branded products of comparable quality, and as much as 370% more for some beauty products.

The company is the brainchild of two accomplished technology entrepreneurs: CEO Tina Sharkey, and chairman Ido Leffler. Their model was impressive enough to investors that they’ve already raised $50 million in funding.

Sharkey introduced the vision for Brandless in a post to Medium late last year.  “Almost every industry is undergoing massive change and disruption. Hospitality, media, personal finance, transportation, entertainment, and many others have all been made more efficient by taking out the middlemen and unnecessary layers,” she wrote. “The CPG industry is still operating like it did in the middle of the 20th Century. No one has yet to expose the massive inefficiencies in the system, however we can see the fractures all around the edges as new brands and platforms begin to take noticeable share. The timing for a revolution has never been more right.”