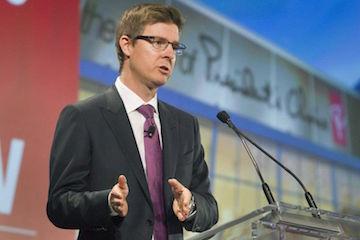 Loblaw Companies is speeding up the expansion of its online grocery offerings this year, adding 500 new pick-up sites for its PC Express click-and-collect services and introducing home delivery to five new markets, up from 11.

By adding hundreds of new PC Express sites, in grocery stores, GO Train stations and Shoppers Drug Mart stores, along with home delivery to additional large markets, “we will blanket the country with an online grocery service in 2018,” said CEO Galen Weston during an analyst conference call to discuss first-quarter results Wednesday morning.

“Nationally today, almost half of Canadians have access to PC Express or home delivery and by year end 70% of Canadians will have the option to shop with us in person, in their car or in the comfort of their own home,” he said.

“Against an intense competitive backdrop, we were pleased with our performance as we delivered growth in tonnage, traffic and average basket,” said CFO Darren Myers.

And Weston emphasized that click and collect remains a priority.

“We are also seeing some very interesting indications of pickup and home delivery working together in a highly complimentary manner. For example, one of our faster growing pick-up locations now has a rapidly growing home delivery business,” he said.

Weston along with president Sarah Davis provided additional insight and context about strategic priorities for the business.

Data driven insights
Since late last year, the company has been making a concerted effort to realize the competitive advantage of its rich data resources, drawing in particular on the years of expertise and tools developed at Shoppers Drug Mart, said Davis.

“Data driven insights will provide a platform for us to better manage our pricing, promotion and assortment decisions to both improve the customer experience and our promotional effectiveness,” she said. “Across our banners, we make thousands of promotional decisions every week. Improving these decisions will improve our overall basket profitability.”

Collect versus delivery
On the differences between the click and collect versus home delivery business, Weston said they are seeing slightly bigger baskets with the former. “In both cases we are seeing a high penetration of fresh, which is an indication that people are not intimidated by the notion of ordering fresh product through the internet.” The hypothesis for the lower home delivery numbers is that customers are using the service to quickly and conveniently get a few items. “Whereas the click and collect is more of the planned weekly shop,” he said.

Self serve
Davis also expanded on a few of the company's actions to remove non-essential costs from the business. “Number one would be the roll out of self-scan at Shoppers,” she said. The service is now at 260 stores rising to about 400 by the end of the year. “We are seeing the penetration of self scanning is starting to increase. We thought it would be around 15% and we have many stores closer to 25%,” she said. The service is improving customer satisfaction by, for example, allowing people with small purchases to get in and out of the store quickly.

READ: Self serve or help yourself?

Inventory control
“We have been working to reduce the inventory we carry in DCs (distribution centres) and stores,” she said. Inventory in DCs is down about 16% and in stores it is down 19% over the last three years. “With less inventory, there is less handling of inventory. And with less handling of the inventory there is less labour required,” she said. In some parts of the business inventory touches are down to 2.5 times on average from four times. “This allows the store to be more productive and have less labour.”

PC Optimum
Weston said they were “very pleased” with the PC Optimum merger and the program has caught on with customers. “We have now reached the previous scan levels in both Shoppers Drug Mart and across the food business,” he said. “And even more optimistically that rate looks like it is continuing to grow.”

He acknowledged some technical challenges with merging the PC points and Optimum programs in the last two months, adding that “we are pleased to report that those are all behind us.”

“We are looking forward over the next few months to optimizing the Optimum program.”