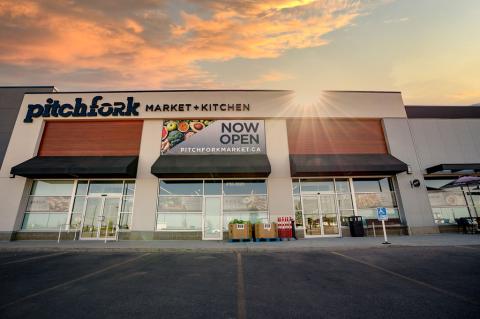 A newcomer to the Saskatchewan grocery scene has plans to expand its footprint in Western Canada.

“As a property developer, they feel they are also a community builder... and that includes access to grocery,” says Chris Brychun, director of retail operations at Pitchfork Market + Kitchen. That gave birth to the concept of creating “a more wholesome and inspiring food shopping experience.”

The concept focuses on a chef-inspired kitchen as “the heart and soul” of the store. “We have a corporate chef and chefs on staff, so all of the products are made fresh on site,” says Brychun. There’s a wide selection of chef-inspired meals on offer, with items like shepherd’s pie, mac and cheese, tacos, and spaghetti and meatballs. 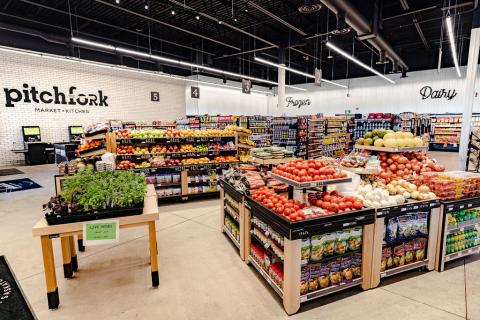 “On the grocery side, we have grocery, dairy, frozen, bakery and meat [departments], even though our original location is relatively small,” says Brychun. “So, we’re trying to be a full-service store and we’re trying to be competitive in that. Our pricing is in line with traditional chain stores, but we’re also really supportive of local. We have local representation in virtually every department and we also use local products on the [kitchen] side of the business.”

The location also has a 45-seat licensed restaurant, with 16 seats on the patio, which serves breakfast, lunch and dinner.

Pitchfork Market + Kitchen is planning to open a second location in downtown Saskatoon early next year. The 18,000-ft.-sq. store will be located at the Midtown Plaza and feature a 100-seat restaurant.

Brychun notes that downtown Saskatoon has been without a grocery store for more than two decades.

“When they did exist downtown, they were very successful, but a lot of the chain stores’ business models have changed to the point where [a downtown location] doesn’t necessarily fit with how they operate,” he says. “So we saw a niche in terms of an abject need for a grocery store servicing that area, but also the ability for us to get into Midtown Plaza, which is the biggest mall in the city. It’s very high profile and has a lot of foot traffic.”

In terms of demographics, Brychun says there are around 20,000 people who work in the downtown core. “We also have around 10,000 residents downtown where there is a range of seniors’ housing and young professionals,” says Brychun. The location is also not too far from the inner city.

“So, we’ve really got some unique demographics with a lot of different needs and a fairly large population base that can drive significant traffic,” says Brychun. 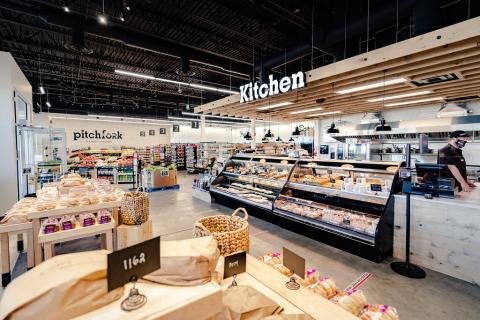 In the long term, Pitchfork Market + Kitchen is planning to expand its footprint in Saskatchewan, Manitoba and British Columbia. “Our ownership group’s vision of this is to become a chain,” says Brychun, adding that it could be five years before the company expands outside of Saskatchewan.

“We are very fortunate in that we have been able to recruit very experienced staff who share the passion for either the restaurant business or retail,” he says.

Rather than a store that’s designed to get shoppers in and out quickly, Pitchfork is designed to be inviting. “We are encouraging people to socialize and have coffee and have our staff and customers get to know each other. We want them to have conversations and our customers can have comfort in knowing [our staff] know their food and they know about what’s going on in the community.”