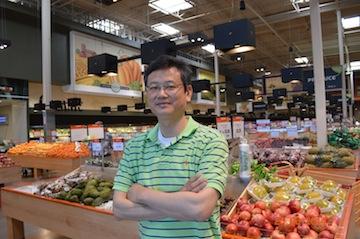 Canadian Grocer sat down for an exclusive interview with Jack Li, head of Al Premium and Oriental grocery stores in the Greater Toronto Area. He talked about how he went from working at Hydro One and into the supermarket sector and what he envisions for the future of the industry. Read excerpts from the interview below.

When did you get started in the grocery industry?

JACK LI:I got started in the grocery business in 1997. I was still working at Hydro One and in 2001 I finally quit my job there and decided to go into grocery full time. In 1997, I had opened a store in Toronto's Chinatown called Oriental in the Spadina/Dundas area. Today, it still exists but it's called Hua Long.

What made you want to go into grocery?

At that time, there weren't many Chinese grocers in Toronto. I saw an opportunity as there were more immigrants coming to the city and they needed better Chinese grocery stores. So in 2002, I opened Oriental Food Mart in Mississauga, Ont. I quickly realized when I opened this store, that I wasn't only serving Chinese consumers. Some 30% of my customers are Chinese, the rest is made up of other nationalities such as Filipinos, South Americans and Caribbean.

Can you describe the concept behind Al Premium, which opened in Scarborough one year ago?

I believe in the future that the minority will be the majority. It took me two years to design the store as different groceries from different countries were all under one roof. Adding to the challenge, there had to be a physical separation of halal meat from non-halal. The kitchen here is separated as well. Department by department, I designed this global grocery concept from the international produce selection to the South Asian HMR offering to the fresh naan (Indian bread) made on site.

We've received so much positive feedback on this concept, however it requires a lot of capital investment due to all the various elements in the store. So for the time being, there are no plans to open more stores.

What do you feel is the main challenge for conventional, mainstream grocers trying to cater to ethnic consumers?

There are two major factors holding mainstream grocers back: first, they don't understand multi-ethnic consumers; the other is their current existing operations and businesses can't adapt to multi-ethnic consumers. Multi-ethnic consumers require different products and the big chains aren't able to modify their systems and offerings to their entire network, just a few stores here and there. To do ethnic right, you have to have 100% commitment. As an independent, it's much easier for me to get the products my customers expect and want.

What do you think about some of the new players on the scene, such as Adonis?

Adonis is targeting Middle Eastern consumers, so it'll be a challenge for them to target the masses with their offering. I see more and more non-ethnic consumers coming into my stores, not only shopping for their every day needs, but specialty ethnic products that are hard to find.

Do you think big-box stores are losing steam?

In China, those mega superstores are empty. Why? Because people are buying online. I believe that stores will get smaller and smaller. We're going to see more stores tailored to specific demographic community/location.

We should focus on food, not superstores. It's so important to know how to ensure quality of your product throughout the supply chain, something that mainstream grocers aren't doing very well. I always think of 'harvest to shelf' when it comes to the fresh quality of in-store products. Today, we're seeing so many new grocers who are able to bring in all sorts of exotic products that are fresh. Consumers don't want food that looks fresh in the store, but then it spoils once you get it home.

Can you tell me why there are so many grocers from your home town of Fuqing  in Toronto?

I believe since 1997, there have been some 90 independent grocers who have set up their own grocery businesses in the Greater Toronto Area. It's something about the entrepreneurial spirit that the grocery industry allows for new immigrants.