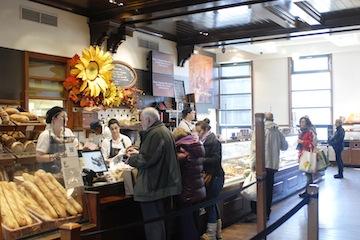 “Everyone feels at home,” Fiset says. What a good bookstore is to bibliophiles, Première Moisson is to foodies.

Opened in 1992 as a single shop in the west Montreal suburb of Dorion, Première Moisson now has 21 stores in Quebec and one in Ottawa. It employs 1,200 workers and its factory in Dorion ships bread to most major grocery chains in Quebec.

VIEW: Take a tour of Première Moisson in Montreal

A planned expansion could see Première Moisson double its store count in the province and begin opening cross-country as well.

On the surface, Première Moisson’s concept is simple: Its stores stock 40 kinds of freshly baked bread merchandised behind glass on handsome wood shelves.

For Fiset, who as a child had dreams of becoming an actor, merchandising is an art form worth perfecting. Her goal, she once wrote, is to make customers salivate. And they do.

“I love the bread,” says Helen Mongeau, who shops daily at Première Moisson’s Atwater Street store in Montreal for her regular dose of miche campagnarde, or country loaf. “The service is always good, the staff is always attentive and available.”

Fiset admits that when her family started Première Moisson, they had no plans to grow into a big company. “But the demand was very large,” she says.

In 1994, two years after opening the first store, Première Moisson made the leap to the Jean Talon Market in the heart of the city. Two or three stores were opened almost every year after, always in a 50/50 partnership with others.

Fiset says head office executives regularly visit each store to make sure they maintain the family’s standards. And Fiset, the artist, insists on approving all interior designs.

Today, Première Moisson’s stores account for 60 per cent of the company’s overall sales volume. The rest is from wholesaling to supermarkets.

Première Moisson doesn’t divulge sales, but suppliers are seeing growth. Guy Geoffrion owns Délices de la Nation, which has supplied Première Moisson with jams and ketchup for many years. His business with Première Moisson is growing 10 to 20 per cent annually as the chain adds pasta sauces and other foods to its bakery mainstays.

Première Moisson entered the market at the perfect time, notes Minha Hwang, a McGill University professor who specializes in retailing.

Traditional Jewish bakeries, with their European breads, were losing customers, and non-Jewish bakers were sticking to tired white and ersatz whole-wheat loaves, gooey cakes and conventional pies. Consumers, meanwhile, were becoming health conscious and curious not just about new grains, but also willing to try breads with olives, nuts, apricots and other delights.

READ: The power of a good fresh section

With the right product for the times, Fiset has her eye on the future. Over the next five years she plans to double the number of Première Moissons in Quebec.

The first store outside that province opened at the University of Ottawa, and Fiset wants to expand across Canada, loaf by loaf, although when this will happen, she can’t say.

“Good food is international,” says Fiset. “ is multi-ethnic and people want different things. We have to adapt to different places, but the base is French.”

Whatever concept proves successful in Toronto, Winnipeg or Calgary for Première Moisson, one thing is sure: It will contain the omnipresent “wow” designed by the business artist who understands that retailing is a stage–and customers are the ultimate audience.