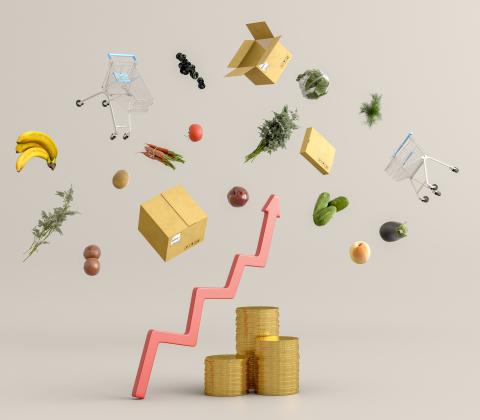 Supply chain issues, labour shortages and threats of war overseas are creating a perfect storm for rising food costs—hurting customers and the grocers who rely on them. “Even prior to the war in Ukraine, we had droughts in Western Canada and elsewhere so we’d seen the price of grains shoot up significantly...and then a big increase in the price of oil, which has an impact on pretty much everything,” says Pedro Antunes, chief economist for the Conference Board of Canada. “We haven’t seen this kind of inflation for 30 years or so and it’s essentially eroded consumers’ purchasing power very quickly.”

While other sectors have been stabilizing, he says grocery and food prices are continuing to increase on a month-to-month basis, with no relief expected anytime soon. “Even when the situation in Ukraine settles, I think there will be a continued move away from Russian supply chains, which will continue to keep prices elevated,” says Antunes, adding that he’s still hopeful we’ll see inflation eventually peak and start to decline in the next few quarters. “The good news for Canada is that we are essentially producers, so while inflation is affecting consumers, it’s also bringing in higher incomes to our producers.”

In the United Kingdom, several grocery chains have been cushioning the blow of rising prices for consumers by offering discount incentives. At Iceland Foods, customers over 60 years of age get 10% off their food order on Tuesdays, regardless of how much they spend. Meanwhile, Sainsbury’s has pledged close to C$800 million in price freezes and matching schemes through to March 2023. British supermarket chain Asda has also lowered prices on more than 100 of its food items starting this spring.

In North America, some larger chains have been using their profit cushions to absorb higher costs from food producers, while large discounters like Walmart have increased their volume of money-saving rollbacks. Natural Grocers, a U.S.-based organic grocer, has implemented exclusive discounts to its loyalty program members, including a good4U Meal Deal once a month that has everything needed to create a healthy meal for a family of four for an average of US$14. Meanwhile, with exorbitant gas prices, shoppers in Quebec are taking advantage of gasoline coupon discounts offered by IGA (a saving of 3 cents per litre for every $70 grocery purchase).

Not surprising, elevated food prices are impacting shopper behaviour. According to the report from McKinsey & Company, Navigating the market headwinds: the state of grocery retail in 2022, 45% of consumers plan to explore more ways to save money, and 29% will actively research the best promotions more frequently. There is also a 21% bump in the number of people who plan to buy private-brand products in place of name brands.

The 2022 Consumer Outlook Survey from NielsenIQ groups today’s shoppers into five categories based on their inflation-related shopping habits. For example, “Strugglers” have suffered financial insecurity and continue to do so, while “Rebounders” have experienced income loss but are back on track. If a price isn’t acceptable on a preferred product, Strugglers will select the cheapest alternative or do without, while Rebounders will wait for a promotion. As a result, the survey shows that grocers need to really understand their customer base to be able to navigate this new food shopping terrain.

Gordon Dean, owner and president of Mike Dean Local Grocer, with three stores in rural Ontario and one in Quebec, says more and more customers in his stores are taking advantage of flyer and “lock-down” deals as well as multi-buys offering discounts on bulk purchases. “They are less demanding regarding brands, but that comes with the caveat that they won’t overpay,” he says. “They will buy whatever brand provides the best offer.”

Ryan Harris, principal at market research firm IRI (Canada), says current times are also prompting “a polarization in human behaviour,” where shoppers will buy private label/discount for certain items (for example, toilet paper) and then reward themselves with other premium products, such as wine or coffee. “They’ll treat themselves as a reward for making all these other rational choices,” he says.

That people are still working at home will continue to impact behaviours, too. Harris says those at home won’t be gravitating as readily to single-serve items as they would have when commuting to work. “Cooking at home has also become more habitual so there’s an opportunity [for grocers] to capitalize on ways to make that simpler by having all the components ready for meal prep,” he says. “For those who can’t compete on price, it’s about finding creative ways to add value and drive consumer loyalty.”

Harris also believes Canadian grocers have a lot more they can do in the e-commerce space to drive loyalty. “The metrics show that we’re not spending less time than Americans online but we’re spending less on grocery,” he says. “Sure, the U.S. has economies of scale that can help cut down on delivery fees, but our processes here are still too cumbersome.” As an example, Harris points to a large Canadian retailer where online returns are made in-person. “Why go back to the store when I was shopping online [so as] not to go into the store in the first place?”

While big chains are banking on keeping cost-conscious consumers happy with their lower-cost private label offerings, smaller independents are relying on what they can do best—being nimble in changing product/format as needed.

Dean says for independent grocers to survive this challenging period, they have to be constantly negotiating with suppliers. “The most important thing we can do to protect our bottom line is to buy correctly and keep our pencil very sharp with our supply partners,” he says. “Whether that means only buying in on deals or buying larger volumes at a time to take advantage of cost savings, we will do what is needed to squeeze a bit more margin through good decision-making.”

He says today’s fluctuating supply chain can actually be a good thing for smaller grocers who are able to make quick decisions. “Suppliers in a market like this often have inventory in the wrong place so they’re looking to move excess product and we small- and mid-size grocers offer them a place to push out excess on a moment’s notice,” he says, noting that his stores will have at least 10 to 20 discount offers on the table for customers at any given time. “Yes, input costs are going up, but a good grocer is finding many one-off deals available to offer our customers and keeping them happy.”

Grocers in more densely populated areas are customizing food quantities to be more affordable and reduce waste, while encouraging customers to shop locally. In January, Ontario’s Vince’s Market started using its weekly blog and social media postings to encourage shoppers to purchase products in season to get both value and optimum quality. The grocer is now working on a video series to teach shoppers how to get maximum use of their fresh produce. “We know there is a huge food waste problem in Canada and independents can solve that because we’re local...you can make multiple trips to the grocery store to get what you need instead of over-purchasing,” says Giancarlo Trimarchi, managing partner. “Sometimes when you buy something at a better cost but throw out 25%, you’re really not saving.”

Along that same vein, Vince’s Market makes sure it is “right-sizing” all of its offerings. “If we are serving older, smaller-household clientele for example, we want to have a variety of options/sizes so they can get what they need,” says Trimarchi. Same goes for the fresh or meat counters, where he says staff is making sure to cut products to the right specs. “We’re moving our regular steak cuts down a half inch and offering a lot of thin-cut, fry-size options,” says Trimarchi. “What we’re looking to do is not have people fully replace what they enjoy but giving them an option where the sticker shock won’t be as burdensome.”