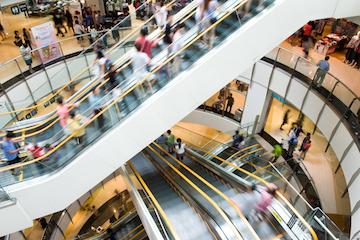 When the COVID-19 pandemic struck and many abandoned in-person shopping and dining out, brick-and-mortar retail became one of the most undesirable assets in Canada.

But now, as many Canadians no longer fear congregating and vaccine passports have been dropped, real estate firms say retail and restaurant chains are scrambling to pick up space again.

"There's been a fairly ugly period brought on by COVID, where there was a lot of uncertainty surrounding where physical retail fits within the consumer landscape, and even before COVID ... because of e-commerce," said Jonathan Gitlin, chief executive of RioCan Real Estate Investment Trust.

"Now, I can comfortably say we're in a position where physical retail has established itself and there's far less ambiguity."

Fried chickenchain Popeyes has plans to open 200 more stores in Canada and the U.S. this year, burrito joint Chipotle will add 10 shops in B.C. and Ontario and BeaverTails has more than 20 in the works. Footwear brand Allbirds and fast-food spots Xero Degrees and Prince Town Pizza are all locking in Canadian locations too.

More than 90% of RioCan's real estate portfolio is comprised of retail space. Grocers, pharmacy and liquor tenants make up 20% of its retail rent—the biggest share of any sector—followed by specialty retailers at about 15%, personal services at 14% and value retailers at 11%.

Grocers recently approached RioCan about growing their footprint, pharmacies are in "hyper expansion mode," discount retailers like dollar stores or Winners are looking for space and so are quick-serve restaurants, Gitlin said.

"Petsmart, they are growing and where Petsmart has historically been a larger box store, they're now looking for smaller, more urban spaces, so a condo owner can go get a dog leash or cat supplies," said Gitlin.

RioCan's retail portfolio, which features a large number of open air shopping centres in urban and suburban areas, is about 97% occupied, but vacancies still loom.

The national vacancy rate experienced declines in the second and third quarter of 2021. However, the rate has now tapered off at 4.1%, commercial real estate company CBRE found through a quarterly survey of real estate investment trusts.

The survey, which covers about 30% of the market and excludes storefront properties, revealed the bulk of available space during the first quarter was in regional shopping centres, where the national vacancy rate sat at 7.6%, but was even higher in many locales including Halifax, where it reached 24.2%.

In Toronto, Tim Sanderson sees people flocking to Yorkville, Queen Street and King Street again, but the heart of the Financial District is still rife with for lease signs.

"There's just people everywhere, but you're not seeing that in the core and you won't until occupancy levels of the office towers get back up to where they used to be — if they ever get back there,'' said the executive vice-president and national lead for retail at real estate firm JLL.

He believes the pace of growth in brick-and-mortar retail is "not going to be what it has been" because retailers are becoming more judicious and less likely to expand through 40- or 80-store plans like they used to.

He is seeing this from the Gap, which announced it will close 350 stores by 2023, and Starbucks which shed up to 300.

Sanderson and Arlin Markowitz, executive vice-president and head of the Toronto urban retail team at CBRE, notice property hunters are often seeking smaller spaces with curbside pickup infrastructure because they're increasingly relying on e-commerce and warehouses.

While those seeking space previously desired short leases to contend with pandemic uncertainty, Markowitz said companies are having the confidence to sign longer contracts again.

Many have even dropped COVID-19 clauses from leases, he said.

"We're at the best point that we've been at since before the pandemic," he said.

"Obviously, it's taken a long time, but we've seen a big recovery and a big shift in sentiment and momentum."