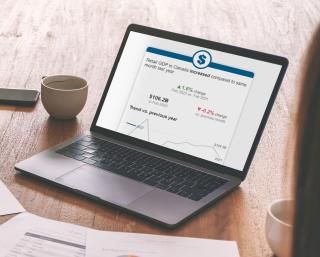 The Retail Council of Canada has introduced an online tool capable of providing members with what it describes as a “first-stop temperature check” of the country’s retail sector.

The Retail Pulse Dashboard will provide access to an extensive array of near real-time data that can include sales by province, information on the sector’s economic impact, employment updates, and credit and debit card spending.

The RCC worked with consultancy KPMG’s data visualization team Lighthouse to develop the customizable tool, which collects and aggregates data from sources including Statistics Canada, Environics Analytics, and Moneris.

The tool will allow users to collect what the RCC calls “critical” information across multiple retail sectors, regions, and timeframes. The available information includes overviews of retail employment, economic data related to the retail sector, and average hourly earnings.

“It’s more important than ever before for all our retailers to leverage the power of data,” said RCC president and CEO Diane Brisbois in a video introducing the service. “Retail Council of Canada understands this better than anyone.”

While regularly updated information on the country’s retail sector is available to everyone, RCC members will be provided with access to much richer data, enhanced filtering capabilities, comparisons, and customization.

According to information provided on the Retail Pulse Dashboard’s most basic level, total retail sales in Canada were $67.8 billion in May, a 15.3% over the same period last year. Retail jobs, meanwhile, increased 3% in June versus the same period in 2021, with 2.3 million people employed in the sector.

The average transaction size for the week of June 26 was $80.97, representing an 8.3% increase over the corresponding year-earlier period.

“The dashboard allows for filtering by retail sector so members can get a better understanding of their specific retail sector,” said the RCC’s national spokeswoman Michelle Wasylyshen. “Specifically for the food sector, filtered information is available based on StatsCan sub-sector levels, namely food and beverage stores including grocery stores, supermarkets, convenience stores, specialty food stores, and beer/wine/liquor stores.”