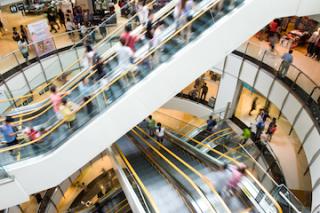 However, the agency's preliminary estimate for September, which was released Friday, hinted much of the overall August gain might have been erased the next month, when retail sales fell 0.5%.

While StatCan cautioned the figure would be revised, Andrew Grantham of CIBC Economics saw it as a sign that "the Canadian consumer appears to be surviving, but no longer thriving."

Between the high inflation rate and the interest rate consistently being hiked, Canadians are feeling the pinch with every purchase. As Russia continues to attack Ukraine and supply chain issues induced by the pandemic persist, many economists have little belief that consumer purchasing power will soon improve.

"It's no surprise that consumers are becoming more cautious, and have been scaling back on discretionary items, such as dining out and entertainment, with monthly gains in sales at bars and restaurants fizzing out over the summer months," said Ksenia Bushmeneva of TD Economics, in a note to investors.

"All in all, consumers will have to make some tough choices in the months ahead, all of which point to significantly weaker consumer spending in 2023."

Grantham and Bushmeneva's predictions were based on StatCan's findings that show retail sales in August rose in six of the 11 subsectors.

One of the quarter's standout gains came from retail e-commerce sales, which were up 5.7% on a seasonally-adjusted basis in August.

On an unadjusted basis, they increased 8.1% year-over-year to $3.5 billion and accounted for 5.2% of total retail trade—a percentage that was unchanged from last year.

Meanwhile, sales at gasoline stations dropped 0.2% in August and on an unadjusted basis tumbled 9.6% because of higher global production.

"Lower gasoline prices put consumers in better spirits and back behind the wheels to savour those final days of summer," said Bushmeneva.

She pointed out that gasoline sales at stations rose 7% in volume terms—the first increase since April.

Shortly after the retail sales data was released, the Conference Board of Canada published its Index of Consumer Spending, which found consumer spending growth remained relatively unchanged in September as it decreased slightly to 95.8 points

Though the unemployment rate fell to 5.2% in September because fewer people were searching for work and the inflation rate also dipped, the board pointed out that more interest rates appear to be on the horizon.

In a news release, the board said, "Many households, especially those highly indebted, will feel the impact of these rate increases and will look to spend less."