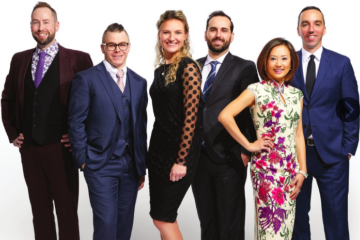 With all the immense yet exciting changes on the horizon for the grocery and CPG industries, we need strong young leaders to guide us into the future. Lucky for us, we’ve got them.

Canadian Grocer’s 2018 Generation Next award winners—all under the age of 40—were chosen for their leadership, innovative work and commitment to the industry. From store managers and sales managers to innovation leaders and head office execs, read on to find out why this year’s crop of Generation Next winners are so deserving of this award.

Hailing from Australia with a CPG background, Lindsey Abrahams moved to Toronto in 2014 and began working as an analyst for Wonderful Sales. In early 2018, he was promoted to district sales manager (part of the Wonderful Sales Canada leadership team), a role in which he handles a range of customers including grocery, foodservice, produce terminals and duty-free.

Contributing from both an analytics and sales standpoint, Abrahams helped double volume of Wonderful pistachios since 2015. Two other brands he represents, Halos mandarins and POM Wonderful, are No. 1 in their respective categories. And Abrahams was instrumental in redesigning category planograms for several of his accounts, increasing sales and reducing shoppers’ confusion.

Abrahams volunteers with the Canadian Produce Marketing Association (CPMA), and he also led Wonderful Days of Caring, an annual initiative that involves the team volunteering to help local causes.

“What inspires me is that I’m selling great brands that are healthy, while promoting the health-focused produce industry as a whole,” he says. “It’s a fun, dynamic industry and it’s full of good people, so it’s easy to get motivated.”

As a teenager working part time at Thrifty Foods in British Columbia, Christian Arbez wasn’t thinking too far into the future. “But, as I realized how multi-faceted the grocery business was and took more commerce courses in college, it became clear this was my future career path,” he says.

Now a 21-year veteran of the company, Arbez has made an indelible mark on both the business and the community. He was responsible for the creation and direction of Thrifty Foods’ 40th birthday campaign throughout 2017. Each month, Thrifty Foods featured a different non-profit organization in various paid media channels. A local “product of the month” was selected and a portion of sales was donated to the featured organization. In total, more than $310,000 was donated.

Another career highlight for Arbez was integrating two platforms—ThriftyFoods.com and ThriftyFoodsOnline.com—into a singular, integrated e-commerce-enabled website. “It brought a lot of efficiency to our business, drove down operations costs and improved the user experience,” he says.

Since February 2018, Arbez has been in a national marketing role for Sobeys. “I’d like to continue to challenge myself, realize my full leadership potential and continue to add value to this industry,” he says.

Bavaro is known as a truly people-focused leader whose positive impact on his store’s culture brings significant results. The annual team member survey shows his team feels more appreciated and more invested in their jobs and, in turn, his store sales increased by 9% this year.

Bavaro describes his leadership style as intimate. “I want to know the people I’m working with and I want to be a part of their lives. To do that, I have to be very open about who I am,” he says. “I bring all of myself to work and I think when people see you are truly invested in what you do, they respond to that.”

With a commitment to diversity, Bavaro was the first Save-On-Foods store manager to represent the company in the Vancouver Pride Parade in 2017. He is also Save-On-Foods’ first male manager to be involved in the Inspire Network, the company’s network supporting career advancements for women.

Always having the consumer in mind has led to many successes for Marie-Christine Bélanger, who joined Metro in 2005 while still a university student. “I’m always thinking about the consumer and trying to make sure that what we are putting in place makes sense for them,” she says.

In 2015, Bélanger was tasked with launching organic and natural products at all Super C stores. Working with another colleague, Bélanger developed Super C’s offer and positioning, tailored to individual stores.

Another key accomplishment was developing a new business model for smaller Super C stores. Bélanger reviewed practices, product offerings, merchandising plans and assortments. “We developed a concept so that small stores could be more efficient and profitable, but at the same time, we had to ensure that we are still fulfilling the consumer needs,” she says.

Appointed to a new director role in June 2018, Bélanger says she doesn’t have a specific career goal in mind. “As long as it’s challenging me and I’m still learning things—that’s what is important.”

Teresa Blakney had a seven-year career in marketing at Nestlé Waters in Shanghai before moving to Toronto in 2014. After a yearlong stint at Campbell Soup Company, she joined Conagra Brands, where she’s had a string of major successes.

After visiting Conagra’s tomato plant in Dresden, Ont., Blakney identified an opportunity to market heirloom tomatoes, which would increase Hunt’s margin by 10%. “I discovered one of our varieties is actually heirloom tomatoes, but we weren’t leveraging this unique selling proposition,” says Blakney. She created a winning business case and launched the product in early 2018.

Blakney is also leading the innovation on Conagra’s frozen portfolio. She launched new Healthy Choice Power Bowls and Frontera, a U.S. frozen Mexican food brand she brought to Canada in July 2018. Another nine new frozen food products are set to launch in early 2019.

“There are so many things you can do with innovation if you have a strong business case,” she says. “My approach is to be open-minded, consistently educate myself about what’s in market, and figure out the key consumer struggles.”

Nigel Oliver started working at Vince’s Market in high school, with a job stocking milk. He worked his way through school, becoming a grocery supervisor after completing university and working as an analyst throughout accounting school. When Oliver received his CMA/CPA designation in 2014, he joined the management team at Vince’s Market.

Oliver’s biggest success to date has been leading the setup and the day-to-day operation of Vince’s Central Support (VCS), a new business unit that includes a central production commissary, warehouse and platter production to support the company’s five stores in the Greater Toronto Area.

He managed the growth of centrally producing 24 value-added Vince’s Own products to more than 200. “With the commissary, we’re creating consistency, we can control our costs, and we’re ensuring that the quality is there,” says Oliver. He continues to manage processes and procedures for VCS, while category-managing critical grocery store departments.

With his accounting background, Oliver is motivated by numbers. “I like being able to look at a number and then be challenged to fix it and make it better,” he says.

As a store brands specialist for FCL, Nena Pidskalny works on every step of the product development process, from “the big idea,” to determining the product size, flavour profile and price point.

In just four years, she’s launched hundreds of new private-label products, with a key focus on premium and ultra-premium products. She has also amassed an impressive trophy case, including five Canadian Grand Prix New Product Awards for products such as Co-op Gold Buttercrunch Toffee, Co-op Gold Perogies and Co-op Gold Sorbetto. “To get recognized from the industry and have a panel of experts say ‘this is the best in the category’ is really rewarding and a very big accomplishment,” says Pidskalny.

Pidskalny dedicates time and resources to nurture small, local entrepreneurs, which has led to developing collaborative, long-term relationships with suppliers. “A lot of our local vendors have never dealt with a chain before, so it’s really a labour of love,” she says. “But it’s great to see the small vendors flourish in this environment.”

Kevin Reider joined A. Lassonde as a key account manager in 2015 representing the company’s vast array of juice and beverage brands. He joined the private-label team in 2016, and is responsible for developing and managing new private-label products for top Canadian retailers. To date, his team has developed and launched more than 30 new SKUs, including premium chilled iced tea and lemonade, while optimizing customers’ assortments.

Reider has also picked up new business and grown key accounts in Western Canada to help further A. Lassonde’s footprint as a premier private-label provider in Canada.

Reider prides himself on building strong relationships with A. Lassonde’s retail partners, based on trust and transparency. “I’m upfront with everything and use my honest approach as an asset to show how a project is going to work for both sides,” he says.

Looking to the future, Reider would like to advance to a senior leadership position, while
still maintaining a sales aspect in the role. “I’d like to continue to be customer-facing because
I enjoy the interaction with the retailers so much,” he says.

Mat Stiver-Balla played a key role in the biggest re-launch in the history of Glad.

For the past two years, Stiver-Balla has worked as the sales lead on Project Genesis. The massive project included a survey of 8,000 consumers to understand their pain points, how they shop the waste category and how to reduce confusion at the shelf. Stiver-Balla worked with a team on developing and testing a new strategy that they believe will reshape the waste category. In February 2019, Glad is rolling out its new look and feel, including new products, sizes and packaging.

Another career highlight for Stiver-Balla was spearheading an effort to provide Clorox care packages for Canada’s wheelchair basketball team at the 2016 Paralympic Games in Rio de Janeiro.

A former sprinter, Stiver-Balla says what motivates him in the business world is seeing the finish line. “The finish line is the solution to a problem and I’m not sure exactly how we’re going to get there, but I have an innate motivation to come up with the best solution possible.”