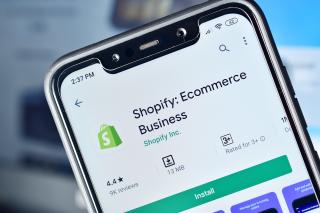 Canadian tech giant Shopify Inc.'s share price fell by more than 15% Tuesday after revealing it will lay off 10% of its workforce because the company misjudged the growth of the e-commerce sector.

The Ottawa e-commerce company's stock dropped to roughly $39.99 in mid-morning trading as chief executive Tobi Lutke said in a blog post that most of the staff impacted by the cut work in recruiting, support and sales.

Shopify will also eliminate "overspecialized and duplicate" roles as well as groups that Lutke said were "convenient to have but too far removed from building products."

Shopify did not share a total number of workers affected by the cuts, but its most recent management information circular shows it ended 2021 with 10,000 employees and contractors, including 3,000 added last year alone. Ten per cent of that total would encompass 1,000 workers.

The company is carrying out the cuts because the COVID-19 pandemic created a surge in demand for Shopify's software as consumers shifted to making a higher number of purchases online, Lutke said.

Shopify bet the amount of shopping people did online instead of at brick-and-mortar retailers would leap ahead by five or 10 years from pre-pandemic predictions.

"We couldn't know for sure at the time, but we knew that if there was a chance that this was true, we would have to expand the company to match," Lutke said.

"It's now clear that bet didn't pay off."

"Ultimately, placing this bet was my call to make and I got this wrong. Now, we have to adjust," said Lutke.

"As a consequence, we have to say goodbye to some of you today and I'm deeply sorry for that."

Incorrect assumptions are largely to blame for Shopify's follies, said Neil Saunders, managing director of GlobalData, in a note to investors.

"Put bluntly, this was a huge strategic mistake that was driven by an insufficient understanding of customer behaviour, a lack of rigour in analyzing the market, and a bit of hubris," he said.

Yet Shopify is not alone in laying off workers. Over the last few months, Wealthsimple, Klarna, Twitter and Netflix have all shed staff as investor exuberance around tech stocks has faded, inflation has soared to an almost 40-year high and recession rumours have loomed.

Data aggregator Layoffs.fyi has counted 401 global startups that have laid off a collective 57,552 employees so far this year.

Amid a broad market sell-off that has particularly weighed on the tech sector, the price of Shopify's stock has sunk more than 78% since its late 2021 peak of $222.87. The company completed a 10-for-one share split earlier this year.

The cuts coupled with Shopify's recent performance increases the likelihood the company will lower its outlook, when it releases its latest earnings Wednesday.

Those affected by Tuesday's layoffs will get 16 weeks of severance pay, plus an additional week for every year of tenure at Shopify. The company will also remove any equity cliff — a minimum amount of period workers have to stay at a company before they can start receiving equity.

Laid off workers will get access to career coaching, interviewing support, resume crafting services and Shopify will cover some of their internet costs during the severance period.

Workers will also be able to keep their home office furniture the company gave them a stipend for earlier in the pandemic and will give a "kick-start allowance" that can be used to buy new laptops.

But Shopify needs to do more than cut workers, Saunders argued.

He wrote, "With Amazon ramping up its services to merchants and opening its solutions to businesses that are not part of its platform, Shopify needs to work harder to appeal to new businesses and retain those existing clients using its services."