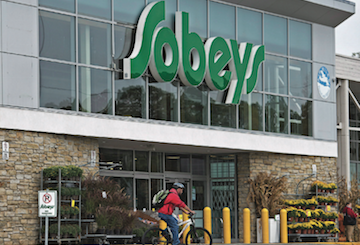 Three years ago this month, execs at Sobeys announced the kind of deal that pundits tend to fall all over their Merriam-Webster’s to describe. Blockbuster! Game-changing! Supercalifragilisticexpialidocious! In this case, any of these seemed appropriate. After all, the deal was Sobeys’ takeover of Canada Safeway, one of Western Canada’s biggest and most entrenched grocery chains and, arguably, the last big supermarket operator in Canada for sale. The price: a cool $5.8 billion.

Don’t get me wrong. Sobeys got a lot for its money. Some 200 supermarkets on fabulous retail real estate, 199 in-store pharmacies, 62 gas bars, 10 liquor stores, four distribution centres, 12 manufacturing plants, a wholesaler outfit supplying independents (Macdonalds Consolidated) and, possibly, the most beloved private-label food brand west of President’s Choice: Lucerne. Sobeys instantly became the No. 1 grocery chain in Alberta and, based on market share numbers, likely the biggest in the West­—slightly inching out Loblaw.

The day after the announcement, CIBC World Markets analyst Perry Caicco (himself a former retailer) commented on the deal: “Now comes the hard part.” It was a wry observation that summed up the problem of any big acquisition. Buying a competitor is easy; integrating it into your business is the real trick.

For Sobeys, this “hard part” continues. CEO Marc Poulin admitted as much, in December, during a conference call with financial analysts in which he said Sobeys had underestimated the difficulty in integrating Safeway. There had been issues around merging Safeway’s IT system into Sobeys, problems with taking over fresh procurement from Safeway’s former American parent, and distractions from internal rigmaroles, such as moving people from Sobeys’ office in Edmonton to Safeway’s office in Calgary.

Another problem: switching to Sobeys private-label Compliments products. Many westerners grew up on Safeway’s Lucerne; Compliments wasn’t nearly as well known. Poulin said Sobeys needed to do a better job convincing shoppers to try the brand. “Honestly, we have to say we were a little bit caught off guard by the fact that we needed to work harder with the customer to get the proper adoption of the private-label program,” he said during the call.

All these are issues that, given time, Sobeys is capable of working out. However, a new problem has emerged that neither Sobeys, nor anyone else for that matter, can control: the collapsing Prairie economy triggered by falling oil prices. Alberta in particular has been hit hard by the fact that oil is now going for around half of what it was during the boom years. In February, Calgary’s unemployment rate hit 8.6%, the highest mark in 20 years. The downturn wasn’t in the cards back when Sobeys purchased Safeway. The Wild Rose province, along with the rest of the Prairies, was booming.

People who’ve lost their jobs (or feel they might) tend to penny pinch on groceries. Albertans have been no exception. Sales at traditional grocery stores in the province last year fell almost 1%, according to Canadian Grocer’s annual Market Survey. That was after rising 2.4% in 2014, and 2.1% in 2013. Other Prairie provinces have seen greater declines. Saskatchewan’s grocery store sales fell 4.2% last year, and Manitoba’s were down 4.3%.

Speaking at the Canadian Club in January, Poulin said, “It can’t be hidden” that the slowing western economy was making the Sobeys–Safeway integration tougher. In March, Sobeys took a $1.59-billion writedown on the Safeway purchase, resulting in a $1.36-billion loss in its fiscal third quarter. Essentially the Safeway business wasn’t worth what it had been earlier, nor was customer spending. “We’re not dealing with the same customer psyche that we were dealing with even a year ago,” Poulin said in March. “The behaviour of the customer in Western Canada has changed, and we have to acknowledge that.”

So, how is Sobeys dealing with the new reality in the western provinces? Several initiatives have been introduced. Earlier this year, prices were lowered on many produce and meat items. “It’s really a long-term plan for us when it comes to affordability,” Sobeys’ Keri Scobie told Canadian Grocer in February.

Interestingly, Western Canada isn’t the only area Sobeys has cut prices. In April it launched the “giga” price drop in Quebec, which permanently drops the price on more than 8,500 grocery products at its IGA and IGA Extra stores by between 5% and 7%. As in the West, the price drop is not a promotion “but a major commitment on behalf of our Quebec IGA network to customers,” Sobeys’ director of corporate communications, Barbara McCully, says. It means that customers “can purchase what they want, when they want it, without having to wait for flyer discounts.”

Sobeys did not do a similar price drop in Ontario. One reason may be that it already offers lower prices in that province via its FreshCo discount banner.

It makes you wonder whether Sobeys needs to bring that banner to the western provinces, where chief rival Loblaw has not one but several discount brands, including Real Canadian Superstore and No Frills. In March, CIBC analyst Mark Petrie suggested Sobeys might need to introduce FreshCo to recession-bound Alberta (although he noted that Sobeys executives hardly need “more on their plate” at the moment).

It’s an interesting idea that reveals a potential weak spot for Sobeys. The market share of discount stores, from No Frills to Walmart, has risen steadily, to more than 40% from around 34% prior to the 2008 recession. But Sobeys, Canada’s second-largest grocer by a wide margin, does not have a discount chain outside Ontario. That’s unusual for a Canadian grocer. Metro has discount banners in both provinces where it operates: Super C in Quebec and Food Basics in Ontario. Loblaw, meanwhile, has discount stores cross-country and, in recent years, has added more in Western Canada. RBC Dominion Securities analyst Irene Nattel says that 60% of Loblaw food retail revenue comes from its discount banners.

Indeed, Canadians seem to have a love affair with discount supermarkets. A survey released in April by Brandspark found discounters to be the most trusted grocers in almost every region in the country. Real Canadian Superstore was No. 1 nationally and tops in the West. The survey also ranked No Frills tops in Ontario. Only in Quebec was a conventional grocer (IGA) solely in first place. “Canadians are on the hunt for value,” says Brandspark CEO, Robert Levy. With that in mind, introducing FreshCo to Western Canada would seem to make sense.

But will FreshCo fly in the West? There’s no guarantee. Just as integrating two big chains can be a major hassle, so too can bringing an unfamiliar store brand to an area. Chris Walsh, an expert in real estate with Fusion Retail analytics in Toronto, says moving FreshCo to Western Canada is an idea fraught with problems. For one, says Walsh, Real Canadian Superstore and No Frills are well established in Western Canada, “so they would be very difficult to compete against.”

Another problem would be which existing stores to replace with FreshCo. Safeway, in particular, doesn’t seem apt for discount conversion. About 60% are in major cities such as Calgary, Edmonton, Winnipeg and Vancouver; and with some in well-established, affluent neighbourhoods, they’re probably better off remaining as full-service stores rather than discounters.

Adding FreshCo locations immediately would add complexities to Sobeys’ western business at a time when it is already strapped with the Safeway integration. Discount is “basically an entire new business,” says Peter Chapman, a former Loblaw staffer who now works as a consultant for food producers, processors and manufacturers, based in Halifax. “You have to have a team dedicated to it, reduced and different listings, warehouse space, distribution systems, communications and flyers devoted to that market.”

But never say never. “Do I think Sobeys should have a discount banner?” Chapman says. “Yes I do. Not having one is limiting the volume of business they do. That being said, you can’t expect them to just start plopping FreshCos down out West. But they are smart people who know their markets better than anyone. Only they know if and how they can do it.” CG