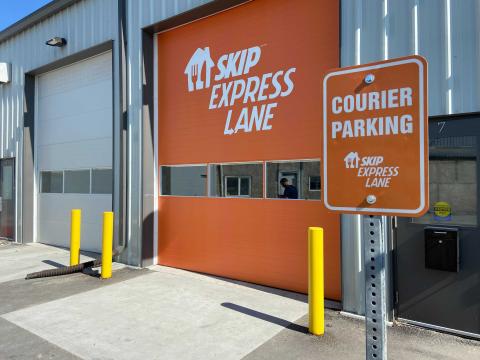 SkipTheDishes is testing a new business model to help it sell household goods and groceries directly to customers.

The delivery service's new offering called Skip Express Lane has two locations that operate like a ghost kitchen, where sales are made solely through an app and walk-in customers are not accepted.

Skip Express Lane locations in Winnipeg and London, Ont. are run completely by SkipTheDishes and focus on household items, snacks, groceries and local delicacies instead of hot meals.

The Winnipeg-based company, which declined a request for an interview. said it pursued the model because it saw demand for convenience and grocery orders increase by 900% over the last year as people stayed home to quell the spread of COVID-19.

For those who have adopted a penchant for shopping local during the pandemic, there are also Spenst Bros. frozen pizza, La Pampa frozen empanadas and Pic-a-Pop sodas for customers in Winnipeg and Forrat's Chocolate, Picard's peanuts and Booch organic kombucha for people in London.

The service promises to deliver all orders within 25 minutes and operates daily from 11 a.m. to 2 a.m. with delivery fees starting at $1.99 or free for those making purchases over $25.

The pandemic, he said, hastened the proliferation of grocery and convenience stores on delivery platforms and even restaurants selling items shoppers typically find at a supermarket.

He thinks Skip Express Lane stores are just another example of how "the lines are definitely blurring" between food service models because of the health crisis and evolving consumer demands.

But it's not an easy space to operate in, he said.

SkipTheDishes already hosts sellers including convenience stores owned by Petro-Canada and Shell, along with 7-Eleven. Rival Uber Technologies Inc. has a series of housewares and grocery purveyors including Rexall, Walmart, Costco, Canadian Tire and Metro.

"It's a very competitive space right now and it'll be hard for [SkipTheDishes] to differentiate themselves because they don't seem to be carrying items that are all unique,'' he said.

However, consumers want more than product selection these days and if Skip fills those other needs, he thinks the business can be quite lucrative.

"The consumer is looking for what they want, when they want it and delivered to their door at a reasonable price," he said. "Any retailer of any sort who can fulfill that demand has the chance of being successful in carving out their niche in the market."