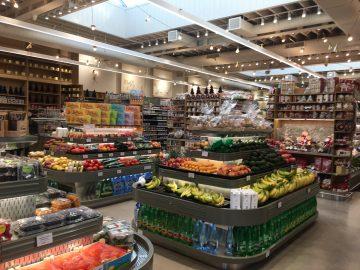 Toronto’s Summerhill Market, an independent grocer that’s been a fixture in the upscale Rosedale neighbourhood since 1954, now has a new location in the city’s Annex neighbourhood.

At 6,000 sq. ft., the Annex location is smaller than the grocer’s flagship Rosedale store (which has a retail floor space of nearly 10,000 sq. ft.), but larger than Summerhill’s 2,300-sq.-ft. second location, the Sherwood store, which opened in 2011 not far from Rosedale on Mt. Pleasant Road.

When strolling through the Annex location, it’s clear it’s been carefully designed to make the most of its compact space. Co-owner Brad McMullen says they learned a lot about how to maximize small spaces from the Sherwood location. “We realized you can start merchandising anywhere and everywhere,” he says, pointing to an attention-grabbing display of Flow Water nestled into an opportune spot near the checkout area as an example.

With bright, attractive skylights and and stylish yet warm decor, the interiors of the new location were designed by Pencil Design—a Toronto-based firm that does a lot of work in restaurant design.

“I like people who do restaurants to do our grocery stores, just because they think maybe a little differently, like we do,” says McMullen, noting that “different” is a key theme in Summerhill’s philosophy. “We’re all about being different; that’s what we focus on—being unique.”

He says one of the main things that makes Summerhill stand out from the crowd is its high-quality prepared foods and Summerhill-branded offerings. “We make everything from scratch, all our pastries, our cookies, our pies, our loaf cakes, our nuts, popcorn, chips—all these things are made from scratch at our commissary.”

He’s referring to Summerhill’s new commissary that just opened earlier this year: a 20,000-sq.-ft. facility dedicated to preparing food items for all the stores. They now have more than 120 cooks and bakers working full time at the commissary, preparing everything from Summerhill’s famous chicken pot pies and turkey dinners to its sauces, salads, and much more—over 700 different items, according to McMullen.

One of the new features at the Annex location—which isn't offered at either of the other two locations at this point—is the hot bar and cold bar near the front of the store. The hot bar features everything from chicken tetrazzini to wild mushroom penne, while the cold bar includes a wide range of salads such as Thai shrimp mango, chickpea and tomato, and fresh fruit salad.

The Annex neighbourhood is known for a more creative, academic demographic (many University of Toronto students and professors populate the area) and McMullen says while they’re just getting to know the local customers, “we’ve had a very warm welcome.” He has already noticed a greater demand for plant-based items than in the Rosedale store, which will likely shape the offerings at the Annex location as time goes on.

Summerhill is in growth mode at the moment—not only did the family-run business open the commissary earlier this year and the Annex store in November, but they’re also in the process of building a new store in Toronto’s Forest Hill neighbourhood, set to open in 2020. “We decided as a family to just have some fun and see what we could do to grow the business,” says McMullen.