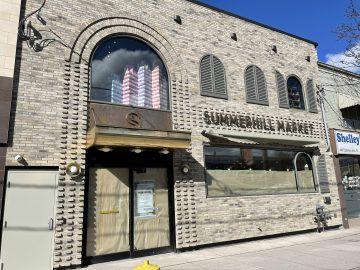 Toronto boutique grocer Summerhill Market is putting the finishing touches on its fourth location, in the city’s Forest Hill neighbourhood.

The new location, which is slated to open mid March, will offer much of the same product assortment of its three other stores—a full shop grocery selection along with high-end prepared meals. However, the store will also be unique for being spread across two floors of 3,600 sq. ft., said Summerhill Market co-owner Brad McMullen.

On the ground floor there will be produce, bakery and some grocery along with checkouts. On the second floor will be the “flagship items” Summerhill has become well-known for around Toronto, said McMullen, including prepared meals, cheeses, deli items and the meat department. Shoppers can move from one floor to the other using two sets of stairs or two oversized elevators.

McMullen said dividing the shopping experience is highly unusual but the location—which includes 150 parking spots—was the best option for what they wanted to do. “A lot of people believe—we'll find out—that going floor to floor with groceries is just not something people want to do,” he said. “We want to own our real estate, and to buy a property that's sizeable enough for a grocery store just doesn't exist in Toronto anymore,” he said.

And while the unusual layout—including requiring people with carts to use elevators—was designed pre-pandemic and feels problematic now because of distancing concerns, McMullen hopes that won’t last much longer. “The idea of going in an elevator will have more appeal than it does today,” he said.

The new store, designed by Pencil, also promises an unusual look and feel, with lots of skylights and rustic exposed brick and beam retained from the original structure, complemented with high-end brass, marble and stainless steel finishes. “It’s not overly fancy or anything, it just has a nice natural feel.”

The new store opening comes a couple of months after executive chef Ted Corrado joined Summerhill to oversee the commissary. The objective of hiring a highly accomplished chef like Corrado is to elevate the prepared food options to restaurant quality, said McMullen.

“I'd really like to see us at that level, if not better, than some of the best restaurants in the city,” he said. “Ted is the gateway to that level of culinary.”