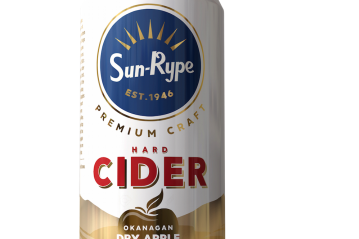 Business for B.C.-based Sun-Rype Products is getting a little harder.

The food and beverage company, best known for its juices and fruit snacks, has jumped into the hard cider market with its own version of the increasingly popular adult beverage called, simply, SunRype Cider.

The 5.5% alcohol cider is being sold in 473 mL cans at select private liquor stores in B.C. and Alberta.

Canadian cider sales have been surging in recent years. For example, Ontario’s LCBO reported last summer that craft cider sales had increased 54% from the year previous. Euromonitor reported national sales of $356 million in 2015, and cider seems particularly popular in B.C. with the B.C. Liquor Distribution Brand reporting sales of $74.5 million in 2015.

“Consumers have been asking us to make an alcoholic cider for years,” said Sun-Rype marketing manager Kat Hillis. Sun-Rype worked with Kelowna-based Big Surf Brewing to develop the new cider.

If, as has been suggested, craft cider sales are surging because consumers like the idea of local options with a slightly healthier connotation (it’s made from apples, after all) Sun-Rype, with its deep roots in B.C.’s Okanagan Valley, might be well-positioned to succeed in the cider game.

“The biggest differentiator is SunRype taste and quality,” said Hillis. “We have a long, rich history of making great things out of B.C. apples since 1946, and we have strong brand equity amongst consumers who drink cider and grew up with the SunRype brand.”

SunRype Cider is made with 100% B.C. apples, locally brewed in small batches and contains no added sugars or sulphites. Sun-Rype offered an alcoholic cider for a short period in the ’50s and produced a “special edition” 7% version last summer to mark the company’s 70th anniversary. 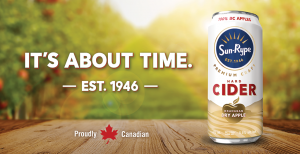 “It was really successful, and that made us realize there was an opportunity there,” said Hillis.  “We’re the apple experts, and consumers who grew up with SunRype told us it made perfect sense for us to make a great tasting apple cider.”

Marketing for the new cider will emphasize the SunRype history with packaging that shows the Okanagan Valley and an adaptation of the SunRype logo from 1946. Packaging design was by Rory Doyle at Sefton Creative in Vancouver. An advertising campaign from Vancouver agency Wasserman + Partners uses the tagline “It’s about time” and will run online, including social, and out-of-home.

The new cider, a permanent addition to the SunRype portfolio, reflects the company’s determination to innovate to stay relevant with consumers today, said Hillis.

“One of our strategies for growth focuses on diversification, and that means looking to opportunities that take our brand beyond juices and fruit snacks to truly become a food and beverage company,” she said.

“That insight opened up a whole world of opportunities for us, and we’ve come to realize that our brand is extendable into other categories, including cider.”