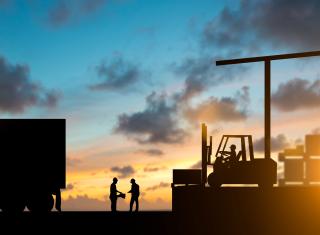 The federal government is getting the dialogue going about supply chain disruptions.

A news release from Transport Canada announced the creation of a task force to address ongoing supply chain challenges brought on by the pandemic. The task force will consult with industry experts to make recommendations regarding short- and long-term actions to tackle the problem. Members of the task force have not yet been announced.

The announcement followed a national supply chain summit on Jan. 31, hosted by Transport Minister Omar Alghabra and five other federal ministers. The virtual summit was attended by a range of organizations, including business associations, manufacturers and exporters associations, as well as CEOs of retail, trucking, railway, marine and air companies.

“For us, the task force is a good first step and a positive development,” says Gary Sands, vice-president, government relations at the Canadian Federation of Independent Grocers (CFIG). “When you have people from all different sectors in one room talking about the supply chain issues we face, and the government is also in that same room, I think nothing but good can come from that.”

Sands, who attended the summit and was invited to speak on behalf of CFIG, says everyone agreed: “We need to start talking about long-term solutions because this isn’t a short-term issue.”

For Ron Lemaire, president of the Canadian Produce Marketing Association (CPMA), the news was also welcome.

“Having a centralized focus for the diversity of supply chain disruptions that are compounding across the industry is key,” says Lemaire, who also attended the summit. “A task force that focuses on bringing the provinces together, bringing all the key stakeholders together, and the federal government across ministries, is fundamental to connect all the dots.”

Regarding the new task force, Lemaire says some short-term actions to look at are: how to use digital tools to streamline and improve the system trucks and ships more effectively; how to find new logistical strategies that address the cost issue with containers; and how to ensure empty ships aren’t leaving ports because they don’t want to wait in a long queue to get reloaded. “There is a range of things that are broken and we can look at a quick short-term fix,” says Lemaire.

For independent grocers, Sands says some of the short-term challenges that need to be addressed are trucking costs and fuel surcharges. “The bills our members are getting for truck deliveries have doubled in many cases, and in Newfoundland for example, fuel surcharges have doubled,” he says. “When we start seeing 35% to 40% product deliveries in rural and remote areas [being delayed], and some product costs more than doubling, we’re getting close to food security issues. We all have a responsibility—government and industry—to keep a close eye on the supply chain.”

The government also announced a new $50-million call for proposals to immediately relieve congestion at ports. In addition, Transport Canada will open an online portal for stakeholders and businesses to be able to provide opinions and suggestions. In addition, the government said over the coming weeks, it’s holding a series of regional and industry sessions to continue the dialogue.