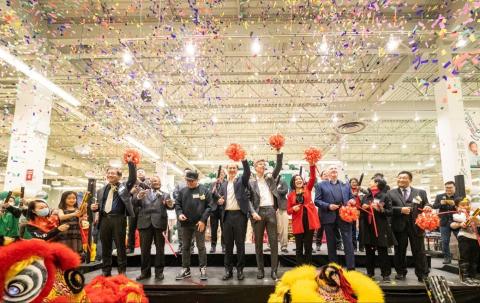 T&T Supermarkets made its grand entry into Quebec this week, opening the doors to a mammoth store in the Montreal borough of Saint-Laurent.

The supermarket is the Loblaw banner’s largest in the country, coming in at 70,000 square feet and representing a more than $10 million investment. That’s almost double the size of an average 40,000 square foot T&T store.

“We knew that we had to come in really strong,” T&T president and CEO Tina Lee says. 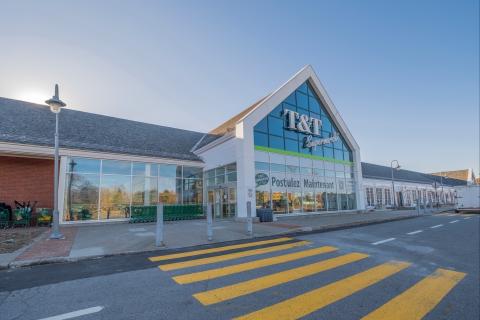 But it would seem the grocer had already caught Montrealers’ attention before hanging out its shingle on Thursday (Dec. 15).

Lee says the city’s residents have been known to travel all the way to Ottawa – the closest distance from Quebec – to shop at T&T.

“We could anticipate the excitement was there not just from the Asian community but from the wider community as well,” she says.

Still, Lee admits to being apprehensive about venturing into the Quebec market. “It’s a new language for us,” she says. “I want to do it right.” To better understand Quebec and its culture, Lee read the book Cracking the Quebec Code and was pleasantly surprised to learn about its love of food and joie de vivre. 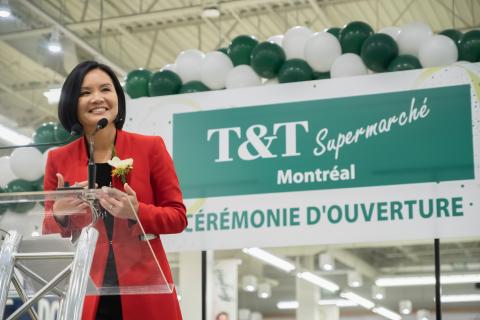 The biggest challenge about opening in Quebec, Lee says, was the translation of Chinese language words to English and then to French. She says a seven-person team had been working full-time on translation for a year.

For other obstacles, T&T had the support of Loblaw’s team, which assisted on everything from legal and communication advice and local product assortments to navigating bottle return regulations, which are different in Quebec than elsewhere in the country.

Despite the tight labour market, recruiting the 300 staff required to run the store was “easy,” Lee says.

“We had a lot of applicants, and we could pick the right talent,” she says.

A first set of staffers were hired last March and trained in stores in Ottawa and Toronto. “It’s a complicated operation with all of the seafood, the cooking that happens in-store (and) the butcher shop,” Lee says. “It’s like seven businesses all under one roof, and I think the talent has to be there, so we’ve invested in it.” 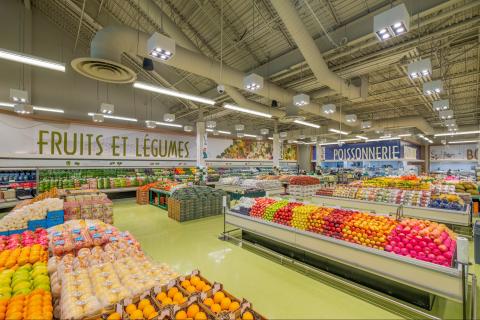 With more than 20,000 SKUs, the store marks several firsts for T&T, including an Asian fruit gift section featuring items like Korean muscat grapes, Chilean cherries and Japanese melons that are all flown in.

There is a large section of alcoholic and non-alcoholic Asian beers, a category “T&T has never been able to play in before,” Lee says.

Many varieties of live fish and seafood are available. In addition, there are about 50 different types of fresh and dried mushrooms, 85 tofu SKUs and more than 400 T&T private label SKUs.

“It’s an incredible assortment. If you’re a food lover, this is a really appealing place,” Lee says.

There’s also a large collection of non-food items in the centre of the store such as stuffed toys and Loz building blocks.

Features like fresh seafood, produce and a self-serve hot food bar appeal to a wide audience, Lee says, noting that some T&T stores have a more than 40% non-Asian clientele.

After a successful grand opening, the chief executive says it will likely take until after Lunar New Year in January to gauge the success of the Montreal store.

“I’m still nervous because I’m not sure how people will react to our format, but I’m cautiously optimistic,” Lee says. And if the store performs well, she says Quebec could see more T&T locations in the future.

T&T Supermarkets’ first Quebec store is located at 300 Sainte-Croix Ave, near the intersection of Highways 15 and 40.