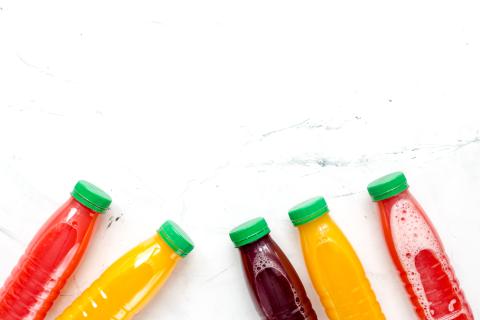 Canadians are a thirsty bunch, with figures from NielsenIQ showing cold beverage sales grew from $4.46 billion in 2021 to $4.78 billion for the 52 weeks ending May 14, 2022. So what are they drinking?

Whether it’s a low-sugar alternative to a conventional soda or an adaptogenic drink that promotes relaxation, the beverage category is dominated by better-for-you products that claim to benefit consumers’ health and wellbeing. Pascale Larouche, Quebec-based Loop Mission’s public relations manager, describes the brand’s typical juice and soda customer as a “healthy indulger.” “They choose a product because it tastes great but also because it does something else,” she explains.

In 2021, Canada Dry launched its Premium Light Tonic Water, which has 43% fewer calories than the brand’s original Premium Tonic Water, in response to this thirst for healthier beverages, according to brand manager, Erika Maddox.

“One key trend that continues to grow and evolve is the interest in better-for-you beverage choices, which might include seeking more natural claims, lower calorie or lower sugar options, and the inclusion of functional ingredients,” she says.

Summerhill’s Rogge says beverages with both low sugar and low caffeine content are a high priority for customers at Summerhill Market. “Health and wellness is playing a crucial role now,” he says.

Kris Linney, co-founder of Toronto cafe and retail shop GoodGood, points to WakeWater as an example of a product that offers several of the better-for-you benefits consumers are seeking. “It’s a caffeinated, sparkling water,” he says. “It has zero calories, zero sugar, zero sweetener, and it gives you that caffeine boost that you would get from a Red Bull or Monster but they use green tea.”

Like WakeWater, many new beverages hitting the market promise multiple better-for-you and premium ingredients, which, in some cases, means the line between beverage segments is becoming less clearly defined.

Indeed, Rogge says some of the most interesting releases in the beverage category are coming from existing brands creating product variations that offer new or added benefits. Rise Kombucha, for example, launched a low-sugar kombucha two years ago, followed by a line of adaptogenic sparkling tea beverages this year.

GoodGood’s Linney has observed that consumers are looking to see an immediate benefit from their beverages, whether it’s a no-crash caffeine kick or the gratification of choosing a low-sugar sipper. He notes that a lot of new beverages touting ingredients such as collagen or adaptogens have some obstacles to overcome. “The biggest challenges some of those beverages run into is it’s something you have to drink consistently over time to actually see the benefits,” he explains. Products with amazing benefits but that require consumers to drink them for a specific amount of time, he says “are kind of fading out a little bit but the ones that you are getting that instant benefit from tend to do quite well.”

A NEW KIND OF ALTERNATIVE

Some consumers are starting to choose premium or better-for-you beverages over purpose-made non-alcoholic alternatives as substitutes for their go-to tipples. “People are replacing those beverages with stuff that doesn’t necessarily taste like beer or wine—it can be any type of beverage,” says GoodGood’s Linney. “I think that’s why this category is growing so fast.”

Summerhill’s Rogge says that although non-alcoholic alternatives remain in high demand, he’s also noticing many customers are opting for beverages that aren’t designed to mimic the taste of alcohol. “I would say a lot of people are switching over,” he says. “Instead of having a glass of wine at night, they’ll have a functional beverage; or instead of cracking that beer in the afternoon, they’ll have an ice-cold sparkling water.”

Canadian craft breweries are tapping into this trend, producing sodas, sparkling waters and seltzers as their non-alcoholic alternatives, rather than non-alcoholic beer. Linney points to breweries like Ottawa’s Dominion City Brewing Co., which has an offshoot called City Seltzer; and Toronto’s Henderson Brewery, which produces a cream soda. Adam Tully, senior director of grocery for Calgary Co-op, has noticed a similar trend, noting their stores carry Annex Soda, which is produced by local brewery Annex Ale Project.

“I think we’re starting to see that more and more for two reasons: One, they have a lot of equipment to be able to produce this type of stuff. And two, I think they’re also wanting to provide the community alternatives to alcohol beverages, and it doesn’t need to be a non-alcoholic beer,” says Linney. “People aren’t always striving for that beer profile or taste.”

Loop Mission’s Larouche says some of her company’s bestselling flavours feature less common drink ingredients like beets, Swiss chard and watermelon. “Since we work with overstock, we have access to more fruits and vegetables that other juice and soda companies cannot afford based on profit margins,” she explains.

Linney agrees that consumers are interested in adventurous flavours. “People are definitely trending towards flavour profiles that are a little bit more unique,” he says, adding the popularity of sparkling water brand Barbet, for example, can in part be attributed to its creative flavours, which include ingredients like ginger, jalapeno and juniper.

In contrast, flavours that remind consumers of their childhood sodas are also trending, according to Linney. “You’re seeing these ‘90s, early 2000s throwback flavours come to life quite a bit,” he says, noting high sales of flavours like cream soda, orange cream and cherry cola.

Larouche has also noticed demand for nostalgic flavours, with Loop poised to launch a line of lemonades within the next year. “I feel like the lemonades are going to be something people are really going to enjoy because of those childhood memories,” she says.

In terms of merchandising, Calgary Co-op’s strategy is to mix the new with the traditional. “In my stores, I have a 12-foot specialty beverage set that contains a lot of craft soda—and that’s plugged right in between my Coke and Pepsi,” says Tully. “We know Coke and Pepsi will drive the traffic, but give them an alternative at the shelf to purchase.”

Eytan Eliahoo, Rise Kombucha’s director of sales, on the other hand, says its products perform best when placed near fruits and veggies, since health-conscious consumers often won’t venture down traditional soda and juice aisles. “Retailers who have moved these beverages to the produce section have seen their sales significantly increase,” he says.

Chrisoda’s Houston thinks the innovations we’re seeing in premium and better- for-you beverages are only the beginning of what’s to come for the subcategory. “We’re in a real boom, which is a huge advantage to the consumer,” he says. “I think it’s going to really change like snacking changed. It used to be just pretzels and chips, but you can get anything now.”