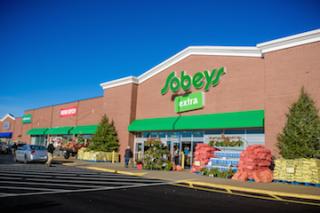 Workers at a Sobeys distribution centre in Quebec have ratified a new contract, ending a three-month strike over wages and benefits.

The company says it looks forward to welcoming back employees and resuming operations at its Terrebonne distribution centre, which supplies its Quebec network of stores.

Under the collective agreement, she says employees will receive a salary increase of up to 28% upon ratifying the new contract.

Bergeron says workers will receive an additional pay raise of up to 12% over the three-year contract, or to the maximum of the pay scale.

Sobeys also agreed to increase the starting salary at the distribution centre to $22, Bergeron says.

She says they return to work on Sunday.

Empire says the impact of the strike on earnings per share is estimated to be five cents per share — largely due to higher transportation costs — and will affect earnings in the fourth quarter of fiscal 2022.

Workers at the Terrbonne warehouse had previously rejected a deal proposed by the company in April.

The resolution of the labour dispute "removes a temporary layer of complexity and costs from industry-wide supply chain disruptions," Irene Nattel, an analyst with RBC Dominion Securities Inc., said in a client note.