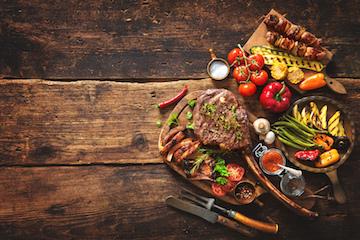 With the first hint of warm weather, Canadians will do two things: put on a pair of shorts (chilly knees be damned) and dust off their outdoor grills. We’re a country that is mad for barbecues. Ownership rates here are higher than they are in the United States, according to a study conducted by the Hearth, Patio and Barbecue Association. For grocers, the arrival of a new grilling season means oodles of opportunity to ignite sales across many departments, from meat and veg to extras like BBQ utensils, paper plates, non-stick spray and the like.

Right on ’cue: Hot trends in grilling
Consumers could be looking to change up their barbecue habits this season. “We see that consumers are more adventurous in what they grill,” says Leya Abramson, senior marketing manager at Pusateri’s in Toronto. ‘Barbecue’ is a big season for us in Canada and at Pusateri’s. Smoking and slow cooking are becoming more popular. Consumers are exploring different cuts of meats. Barbecue season is our opportunity to showcase higher-end cuts. Because we dry age our beef in a 28-day process, the best cuts to really promote tenderness are steaks and fillets.” Summer grilling also presents an opportunity to sell more items to complement what’s on the grill, she adds, like fresh, local produce.

International flavours are as strong as ever, but new influences are coming from countries further afield on the culinary scene. Marinades and spices are giving consumers new ways to shake up their current repertoire of go-to meals, with new products paying homage to the culinary traditions of places like Peru, Ethiopia, Korea and Morocco.

And grocers know well that plant-based products are becoming far more prevalent. “Veggie burgers and dogs are becoming a mainstay, but some companies are also exploring plant-based chicken, steak and fish options,” Abramson notes. Global investment firm UBS predicts worldwide sales for meat alternatives/plant-based foods will leap to US$85 billion by 2030, up from US$4.6 billion in 2018. That said, despite the buzz around these products, sales still represent just 1% of total retail meat sales, as reported by the non-profit group The Good Food Institute. In Canada, vegans and vegetarians represent less than 10% of the population, according to research from Dalhousie University.

Grocers should take note that consumer attitudes toward barbecuing have evolved. “It’s not just about making dinner,” explains Ted Reader, chef, author and barbecue expert known as the “Godfather of the Grill.” “It’s about outdoor entertaining and a way to spend more time outdoors, eating and cooking together with family and friends. We have such a short window to barbecue in Canada—about four months—so we want to make the most of it.” That’s why he says Canadians are expanding their grill repertoire, buying smokers and charcoal grills in addition to their gas grills.

With these new cooking toys, consumers will be looking more for cuts like beef brisket and pork shoulder, ideal for producing tender, low-and-slow smoked meat. And they’ll want interesting marinades and spices to put on them, especially Middle Eastern and Mediterranean flavours. Reader also says grocers should stock plenty of cauliflower over the summer. “It’s versatile and ideal for grilling and roasting. What we’ll have less of are those extreme, fatty foods, like meat covered in strips of bacon.”

Hooked on classics
“People are itching to get outside and start grilling,” says Andrew Flint, butcher at The Healthy Butcher in Toronto (two locations). In early May, his customers are already thinking about what they want to be barbecuing. “When they shop, they usually choose beef and chicken, our top sellers. They mix it up by buying a flattened chicken, chicken burgers, house-made sausages, pork ribs or lamb kabobs.”

Education is a key component for getting consumers to wander away from the tried and true. The Healthy Butcher offers hands-on classes onsite to teach people how to break down a side of pork and cut up a whole chicken. “There’s more available than just rib-eye and tenderloin,” notes Flint. “We try to make meal planning really easy for customers. We ask what they’ve got in mind, how many people, budget and how much time they have. Often, they resort to familiar cuts instead of buying something new.”

Research from Canada Beef backs up this tendency. Its data shows 83% of consumers buy the same cut of beef over and over again and that 51% stay away from unfamiliar cuts because they don’t know how to cook them. Being overwhelmed by a wealth of meat choices underscores the need to simplify consumers’ buying decisions through education. Canada Beef says only 31% of shoppers are aware of the three main steak types—grilling, marinating and simmering.

Derrick Ash, Canada Beef’s senior manager of business development and technical services, says he would like to see retailers’ on-package labels include cooking instructions along with easy-to-understand icons. Meat department staff can suggest consumers download Canada Beef’s Roundup app for expert advice on cut selection, recipes and preparation tips. “Grocers need to be a source of knowledge and inspiration,” says Ash. “Millennials, for example, are keen to recreate restaurant experiences at home, but they don’t know how.”

“There’s a lot of room for Canadian grocers to innovate,” he adds. “Barbecuing is an event. There’s romance in firing up the grill—something you don’t get with turning on the oven. Barbecuing should not be a chore. Retailers can help make it fun.”

Ash encourages grocers to differentiate themselves with signature programs. “Why just offer one or two different types of burger patties?” he asks. “Why not have a wide assortment of flavours? Really own it and become a destination for those who love to barbecue.”

Meat is definitely not taking the summer off. Data from Statista shows more than 80% of Canadians eat all types of meat but they are consuming less. About 85% say they make at least one main meal without animal protein each month, according to a University of Guelph survey. For grocers, that’s an invitation to find a happy middle ground for omnivores by stocking appetizing plant/meat blends. Think house-made burgers that mix ground beef with legumes or mushrooms, or pork tenderloin stuffed with herbed quinoa.

Sauces, condiments and tasty extras
With consumers increasingly looking for nutritional components in their food, new options in the condiment aisle are answering the call. “More and more Canadians are trying to add plant-based while reducing processed carbs and sugars,” says Richa Gupta, founder, Good Food For Good. “The mass market is flooded with plant-based meat alternatives that tend to be highly processed. We want to show Canadians how they can have an absolutely delicious barbecue with real whole ingredients and no added sugars.”

The company has launched organic ketchups (regular and spicy) sweetened with dates, along with barbecue sauces (regular and sweet and spicy) that have earned a place on the table as vegan, gluten-free, dairy-free, low-carb options. Its organic cooking sauces, which can double as marinades for grilled foods, tap into international flavours with three showcasing Indian classics (Tikka Masala, Coconut Curry and Butter Chicken) and two with Mexican flair (Taco and Spicy Taco).

Meanwhile, McCormick Canada is feeling the heat with a spicy roster. It has introduced a new Sweet & Smoky BBQ Mustard from
French’s, ideal for grilling, cooking, dipping, glazing or as a condiment. Its popular Frank’s Red Hot sauce now has a tangy Buffalo Wings flavour for extra kick. French’s Crunchy Toppers can elevate salads and burgers, and come in three SKUs: Jalapeno, Fried Onion and Dill Pickle. Consumers can also shake up their barbecue with Club House La Grille Maple Bacon Seasoning and Club House La Grille Montreal Steak Spice Seasoning. “Consumers enjoy discovering new twists for their everyday meals and are looking for unique flavours that they can’t easily create on their own,” says Deborah Sharpe, the company’s group marketing director.

McCormick continues to do well with condiments featuring a healthy edge. Last year, French’s launched no sugar added and low-sodium ketchups. “We saw double-digit sales growth in the better-for-you ketchup segment in 2019,” she notes. Interestingly, the drive toward plant-based eating and meat alternatives is having an indirect influence on the success of condiments. “The highest barrier to consumption of these is that plant-based alternatives don’t taste as good as the foods they replace, said 67% of consumers surveyed ,” she explains—so to address this concern, condiments and flavour enhancers can step in and play a larger role in giving plant-based options broader appeal.

Great beginnings
As customers focus on the main event (whatever masterpiece is planned for the grill), they’ll likely be looking for easy appetizers that can land on the table without a lot of fuss. Summer Fresh has a new solution with the launch of plant-based, gluten-free, vegan Nutty Dips in three flavours: Spicy Thai, Caramelized Onion and Queso-Style. They’re made with cauliflower and almonds for a creamy taste without dairy.

To warm up a crowd, consumers may choose to serve chicken wings—a little something before the mains arrive—but that can leave out the vegetarians and vegans. Toronto-based Wholly Veggie, makers of popular meatless burger alternatives, are bringing plant-based “wings” to the market, including Buffalo Cauliflower Wings and Ranch Cauliflower Wings.

Bun-derful news
For many years, the bun section might have felt a tad, um, stale with few truly new innovations. That has changed with the introduction of new products. Just two years old, Toronto-based Unbun Foods is already experiencing rapid growth, thanks to its lineup of certified keto, grain-free, gluten-free, paleo-friendly buns (including a vegan version), pizza crust (ideal for putting on the grill) and baguettes. Kathryn McIntosh, vice-president, marketing at Unbun, says the company will be expanding its offerings to include tortillas. They’re ideal for stuffing with everything from roasted veggies to chicken strips and allow consumers to stick to their chosen diet regimes even at summer barbecue time.

U.S.-based Martin’s Potato Rolls has recently rolled out its hugely popular burger buns in stores in Manitoba, Quebec and Ontario. “We were getting many requests from Canadians who had tried them,” says Julie Martin, co-owner, social media manager and the granddaughter of Lois and Lloyd Martin who began selling the buns to Pennsylvania locals in 1955. While the pillowy-soft potato rolls were known stateside, they were new to many Canadians, prompting in-store sampling and social media awareness campaigns. “The rolls sell themselves once people taste them,” adds Martin. She says they are a natural fit for barbecues since the buns (also available in slider size) are sturdier than average buns. They won’t turn crumbly even when piled with saucy pulled pork. Standard sized buns have as much protein as an egg, courtesy of their high-protein wheat content, feeding the needs of customers looking for a nutrition boost—an underlying theme to the barbecue season of 2020.