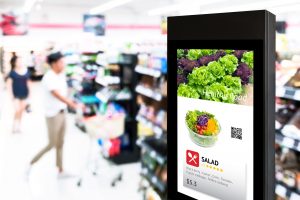 The grocery store of the future will look a lot different than
it does today. Think automated checkouts, food tailored to individual diets, produce grown in stores, and a lot less plastic packaging on the shelves. Here’s a look at the big trends predicted to influence future grocery shoppers, along with strategies that can help retailers future-proof their businesses.

With more consumers shopping online, grocery retailers will need to give customers a compelling reason to shop in-store. “If you want them to invest their time in a shopping experience, it’d better be an experience,” says Eric Matusiak, partner, IT solutions & national retail leader at BDO Canada. “Otherwise, they can just click and have it show up at their door.”

What will make for a great experience? Matusiak suggests grocers look at doing “try-before-you-buy stations” and reconsider the layout of their stores to make them more interactive and adventurous. “Why are all grocery stores effectively just rows of aisles?” he asks. “Why aren’t we drawing people into a store for an actual food or shopping adventure?’’

Toby Pickard, head of innovation and futures at IGD in London, U.K., says we’ll start to see improved in-store displays, particularly with fresh produce, as well as more in-store information and entertainment. He gives the example of the new Le 4 Casino concept store in Paris, which has a gourmet grocery aisle, a large organic and vegan offering, exclusive products from guest brands and chefs, and a state-of-the-art wine cellar. “They’re also using technology like augmented reality to make the shopping experience more fun and more exciting,” says Pickard.

The “grocerant” trend will also continue to proliferate. Mike Lee, founder of futurist food lab The Future Market, gives the example of Whole Foods, which is adding wine bars and sports bars to some locations, complete with televisions and a range of food options. Rather than being a place to grab a quick bite when you’re shopping, “they’re trying to turn it into a place where people can come, watch a game, and get a beer and a pizza,” says Lee. “I think the whole restaurant-within-retail is going to continue to accelerate to more elaborate and epic formats.”

To respond to the experiential trend today, Lee says retailers can start experimenting. “If you’re trying to prepare for the future, carve out ways to test smaller-scale things where you can have a little bit of a larger appetite for risk,” he says. “Try things out, see what sticks, and then work on formally scaling that up.”

It’s also important for retailers to go even deeper into data collection and analysis. “That will enable retailers to understand their shoppers better than ever before,” says IGD’s Pickard. “Data has been the heart of the industry for a long time, but as we get more data about shoppers, it will be an important part of improving the shopping experience.”

Busy consumers won’t need every trip to the supermarket to be an adventure: there’s still the need for speed and convenience. Much of this will be enabled by technology.

Payments Canada and Leger Marketing research reveals 43% of Canadians are interested in invisible checkout payments such as those offered by Amazon Go, and 53% said they had abandoned a purchase either in store or online because of “friction” at checkout, meaning anything that slows down a payment.

As Amazon’s fully automated concept Amazon Go scales up—it reportedly plans to open 3,000 stores by 2021—­grocers will need to step up their game. “They’ll realize the self-checkout is not enough,” says Joel Gregoire, associate director, food and drink at Mintel.

While not every retailer can afford to follow in the footsteps of Amazon Go, there are plenty of ways to make the in-store experience more convenient. Gregoire suggests one way is with in-store apps that utilize wayfinding or augmented reality technologies that allow users to map their shopping route, locate specific products and get more product information.

In the future, retailers will also leverage technology to automate both in-store and online purchases. “This is somewhat related to speed, but it’s also related to the hassle factor: more mundane and routine things are going to get automated, to the point where you can imagine your home assistant making a shopping list for you,” says BDO Canada’s Matusiak. “It knows that you’ve run out of paper towels and will put that on your shopping list. It may even order it for you directly and it just shows up at your door.”

Consumers also want convenience on the food front, which will continue to be a focus for retailers. “As lifestyles become increasingly hurried, CPG manufacturers and retailers have an opportunity to reach consumers who are increasingly looking for fast and easy solutions,” says Isabel Morales, consumer insights manager at Nielsen. “These may include anything from easy-to-prepare meal kits, grab-and-go snacking solutions or ready-to-serve meal solutions.”

Gregoire adds that when it comes to convenience foods, retailers can’t sacrifice quality. “The notion of convenience is going to be tied to also having premium, fresh and healthy foods.”

3 TECH WILL INFLUENCE THEIR SHOPPING TRIPS

BDO Canada’s latest “Retail Trends” report notes that retail is in the middle of wide-scale technology disruption, driven by the evolution of mobile commerce and changes in consumer shopping habits. It suggests retailers keep a close watch on technologies such as automation and AI, virtual and augmented reality, beacon technology, mobile pay and predictive data analytics.

Whether it’s in-store or online, technology is going to make shopping much more seamless, says Matusiak. “Even though in some respects it feels kind of seamless today, it will essentially be a more accelerated version of what we’re already starting to experience.”

And while it’s easy to get excited about shiny new things, one important consideration for retailers is the human factor. “People still have to use , so I think people are actually the toughest part of technology change,” says Matusiak. “There’s getting your own staff used to a particular technology and how it works, then there are customers themselves. As much as we like to feel like we’re in a world of constant change, some people’s habits don’t change that quickly. You have to educate shoppers and say, ‘Here is a new way of doing things.’”

The Future Market’s Lee says in the longer term, technology will allow grocery stores to become sites of production, not just distribution. “We’re already seeing this with indoor controlled farming, where grocery stores have started to build new facilities inside the store,” he says. For example, a Brooklyn, N.Y. Whole Foods Market partnered with Gotham Greens to build a commercial-scale greenhouse farm on the roof of the store. The 20,000-sq.-ft. state-of-the-art, climate-­controlled greenhouse supplies Whole Foods locations throughout New York City. “As the technology becomes cheaper and proliferates a bit more, it’s going to be easier for grocery stores to integrate ,” he says.

Grocery stores won’t just grow their own produce—they could one day grow their own lab meat. “We’ll no longer need to have a giant farm to grow cows and it’s sort of mind-bending that you could conceivably have grown in the back of your grocery store one day,” says Lee.

4 THEY’LL BE FOCUSED ON THEIR HEALTH

While the health trend has been going strong for years, there’s a coming shift towards eating healthy not only to feel better physically, but also for emotional and mental health. Consumers will seek a balance between all three areas, says Christina Bowden, senior director of consulting at Bellevue, Wash.-based The Hartman Group. “We’ll start to see more products that support mental wellness, help people get the energy they need, and help manage the stress around day-to-day activities.”

On the brain front, the buzzword is “nootropics,” ingredients that can help improve cognitive function, including memory and focus. “We’re going to see products across categories that incorporate nootropics ingredients, including caffeine, L-theanine, B-vitamins, choline and omega-3s,” says Mintel’s Gregoire.

Ingredients that reduce stress and promote relaxation will also gain attention. Mintel’s list of “ingredients to watch” include CBD—the non-psychoactive compound found in cannabis and hemp that can help reduce stress and anxiety. There’s also adaptogens—plants and herbs that support the adrenal system and can help people reduce stress, focus and recharge.

The key strategy for grocers will be to optimize their product portfolio across these areas, says Bowden. “They can demonstrate that they are connected to the physical and emotional side of what wellness now means to consumers.”

And Netherlands grocery retailer Albert Heijn launched My Nutritional Value, which is an online service that gives customers the nutritional values of products they have purchased and recommends products for specific health and dietary needs. “Retailers are tailoring the shopper journey based on the nutritional requirements of the shopper,” says Pickard.

As environmental issues continue to get attention, tomorrow’s shoppers will be very serious about eating green. “A new era of sustainability is rising and it’s touching every corner of the world,” says Nielsen’s Morales.

One of the biggest issues is food loss and waste. A recent study by Second Harvest and Value Chain Management International found 58% of food produced in Canada—about 35.5 million tonnes—is lost or wasted every year. Of that, more than 11 million tonnes is edible food with a financial value of nearly $50 billion. According to research from the Canadian Centre for Food Integrity, 69% of Canadians believe they are most responsible for reducing food loss and waste, followed by restaurants (65%), grocery stores (61%), and food processors (58%).

Grocers will need to ramp up their efforts to reduce waste and communicate their efforts to customers. “Consumers will patron the types of businesses where they know that there is a focus on minimizing food waste,” says The Hartman Group’s Bowden.

Pollution is another growing concern, which has put a big focus on reducing plastic and packaging waste. “The retail and manufacturing industries are collaborating with governments to make major commitments to reduce waste—particularly single-use plastics,” says Morales.

Consumers will also likely do their part to reduce the impact on climate change. Gregoire says while the connection between food and climate change is a bit harder for consumers to grasp, there is growing awareness about eating meat because of the environmental impact of meat production. “The interesting developments in terms of innovation are around plant-based meat and lab-grown meat, not only from smaller startups, but larger companies as well,” he says.

Morales says the more companies embrace sustainability, the more they will change the product and retail landscape. “Consumers are constantly reacting to and evolving in this space, and growing more sophisticated,” she explains. “To stay relevant, companies will need to ensure they are putting consumer needs at the centre and doubling down on their marketing and execution strategies.”