Imagine using in-store technology to direct a shopper to a specific product or to share a salad coupon on their phone as they peruse your produce. While it’s still early days for tracking technologies, some are already proving useful. Welcome to the future.

Grocers have long looked to their online counterparts with envy.

Thanks to cookies and tracking pixels, website managers can follow users as they execute internet searches, click on links and hover a mouse over something of interest. Bricks-and-mortar executives, on the other hand, have largely had to rely on loyalty cards and infrared traffic counters to track shoppers.

New technologies promise to bridge that gap. Known variously as “indoor location” or “physical analytics,” this discipline attempts to monitor shoppers’ movements through a store. Retailers can exploit the resulting data to help shoppers find products or to send targeted promotions. Behind the scenes, these systems aggregate and analyze data on customer movement and behaviour. One product, for example, a “heat map,” reveals traffic patterns. Retailers can use it to optimize floor plans or to see how much interest shoppers pay to displays.

Most of these concepts are early in the hype cycle; few have evolved beyond pilots at multinational retailers. Fewer still can be found in Canadian grocery stores.

Metro, for example, told Canadian Grocer its digital team is interested in indoor location, but has no plans to test it yet. Others may be doing so quietly; retailers often prefer to test such technologies in secret to maintain any resulting competitive advantage.

Derek Top, an analyst with San Francisco-based consultancy Opus Research, says, “ certainly being trialled and piloted by many .”

Some will have difficulty crossing the fundamental cost/ benefit analysis hurdle. But with several dozen startups developing innovative new systems–and major multinationals, such as Apple, Microsoft, Google and Samsung, promoting their use–the art of the possible is evolving rapidly. Forward-thinking grocers should pay close attention.

Given the ever-increasing smartphone penetration, it was inevitable grocers would create specialized apps. Increasingly, these apps track a phone’s location. Typically, shoppers need to opt in by downloading the app (usually available for Apple’s iOS and/or Google’s Android) and run it as they shop. Offering a useful service, such as an online shopping list, may entice them to do so. 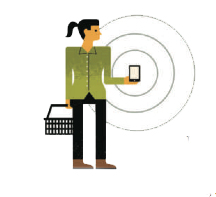 There are numerous methods for tracking phones. Some involve sounds inaudible to the human ear, but perceptible to a microphone. In other cases, the phone’s camera uses a store’s lighting system as a positioning grid. (Last year, Royal Philips, a global lighting company, piloted an LED lighting system that features an integrated wireless communications system to keep tabs on a phone’s location.)

Other systems triangulate Wi-Fi signals. Perhaps the coolest idea is mapping anomalies in a building’s unique magnetic field, partially produced by its steel structure. Finland’s IndoorAtlas uses a smartphone’s digital compass to determine its position within that field.

No indoor location technology has generated as much excitement as Bluetooth Low Energy beacons.

These devices (some as small as coins) transmit signals detectable by some smartphone devices, to a typical range of about 70 metres. By learning the phone’s approximate location, an app can, for example, display ads or send special offers to the user.

There’s also the possibility of merging them with a payment system to speed up checkout times. Beacons have won praise for low per-unit and installation costs (although they’re only a fraction of the investment required to use them). Apple’s iBeacon, introduced in 2013, is the most recognized; Samsung recently introduced its own system, called Placedge.

“Often it will take 15 to 20 seconds for a beacon to recognize that a person is there,” he says. “And it will only know the general area, not the precise location.”

So a grocer might know a person is in the produce section, but won’t know she’s standing in front of apples.

Aside from Hudson’s Bay Company, which recently deployed beacons at several North American stores, few Canadian retailers are known to be testing this technology. But numerous trials have been announced elsewhere. Safeway and Giant Eagle in the U.S. were credited as being the first supermarket chains to do so; Tesco and Waitrose followed suit in the U.K. Marsh Supermarkets in the U.S. recently announced an iBeacon-based platform that interacts with smartphones and the Apple Watch.

The humble shopping cart hasn't changed much since its introduction, at Piggly Wiggly supermarkets, in Oklahoma in 1937. Every once in a while, though, one goes to the mod shop. A few years 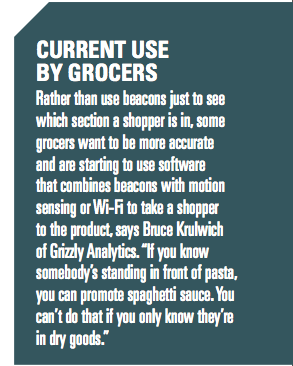 back, Chaotic Moon Labs, of Austin, Texas, unveiled a shopping cart prototype fitted with a tablet and a camera. It could provide product recommendations and directions (in a robotic voice normally reserved for 1970s science fiction) and check out the customer automatically. It could even follow the shopper through the store under its own power. It seemed more like a one- off prototype than a viable commercial solution ready for rollout.

Yet smart carts haven’t caught on. And if the decidedly luddite offerings available on large cart manufacturers’ websites are any indication, they think smart carts are–at least for the moment– kind of stupid. 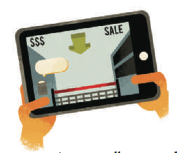 Not everyone carries a smartphone, but everybody’s got a body–and there are ways of tracking that, too. San Francisco-based Prism Skylabs uses security camera footage to monitor shoppers’ movements. Shopperception, a tech company with offices in New York and Argentina, uses motion sensors located four metres above the floor to track the area in front of store shelves. This system identifies which products shoppers pick up, examine and put in their carts. The goal is to influence shoppers at the moment they’re considering a purchase. For example, it might observe a customer pick up a box of cereal and– via an app or digital signage– offer her a 15% discount if she buys two. Or it could suggest the store’s own private label product instead.

Other systems seek to identify who people are. By analyzing a snapshot of a customer’s face, software can try to identify their age, sex and other demographic information. That can be used to determine which ads to display on a nearby LCD screen. (Minority Report, the 2002 Tom Cruise action film, showed this concept.)

RetailNext is an indoor analytics consultancy in San Jose, Calif. Its VP of research and development, George Shaw, says systems can now judge these traits more accurately than humans. In an effort to increase sales of its Trident and Dentyne gums, Mondelez International created a “smart shelf ” that uses Microsoft’s Kinect motion- sensing technology to track customer behaviour. It identifies consumers by sex, age, dwell time and mood.

“If the shelf detects a shopper scanning the products, we can deliver audio, animated  content or play a video based on demographics, distance or dwell time and even the time of the day,” says Stephanie Minna Cass of Mondelez. The company is currently piloting the shelves in the Asia-Pacific region.

Unlike methods that track smartphones, systems that monitor people often don’t require customers to opt in. It’s their greatest strength and most glaring weakness.

On one hand, the ability to track every customer could pro- vide more useful customer analytics. On the other hand, people may find the technology invasive. Shaw says while a handful of grocers have trialled camera systems, they tend to be less promising for chain-wide grocery applications because they could require hundreds of cameras to cover a large store.