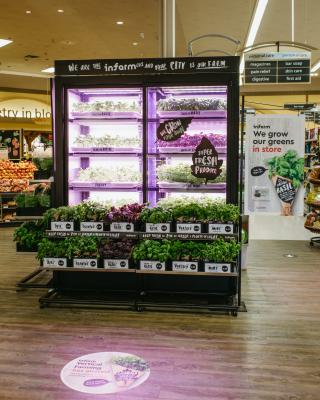 In some canadian grocery stores, when consumers ask where their leafy greens come from, the produce manager can just point a finger.

More and more grocers are growing lettuce, microgreens and herbs in-store using vertical farming methods or are buying produce grown at giant, warehouse-style vertical farms located near major cities. As consumer demand for locally-grown food grows, vertical farming is gathering momentum. Although methods vary, vertical farms typically rely on LED technology and automation to grow greens in climate-controlled environments. By 2026, the industry could be worth US$12.77 billion globally, compared to US$2.23 billion today, according to Allied Market Research.

Having vertical farms in-store “gets agriculture closer to city dwellers (and) gives customers the sense the grocer is very much intertwined with the rest of the supply chain,” says Sylvain Charlebois, senior director at the Agri-Food Analytics Lab at Dalhousie University. “It’s a fabulous idea if you have the space and capital.” But while the local movement is critical, “you don’t want to overdo it. I’m not entirely convinced you’re going to generate more sales by installing a vertical farm inside your grocery store. It’s more about supporting your brand.”

Quebec independent grocer Avril Supermarché Santé is a major proponent of in-store vertical farming. The grocer originally wanted to build a greenhouse on the roof of its 44,000-sq.-ft. Laval store, which opened in 2018, but the idea proved unfeasible, says Avril co-founder and co-owner Sylvie Senay.

Senay and fellow Avril co-owner Rolland Tanguay caught the vertical farming bug while attending a trade show in California. After their return home, they teamed up with INNO-3B, a Quebec company that specializes in vertical farming, to build a vertical farm above the retail area in the Laval store. Doing so didn’t come cheaply. “As we were the first to have this technology in a supermarket, we had to invest $500,000 in R&D” to develop the farm.

Still, it has been worth it. Senay says having the vertical farm in-store maximizes space usage, leaves a small carbon footprint and makes it possible to grow a variety of fresh, uniform microgreens year-round with “unsurpassed quality” and full traceability. As a bonus, microgreens grown at the vertical farm supply all eight Avril locations.

“We’re very excited about how our customers are responding to this,” says Niluka Kottegoda, vice-president customer experience at Sobeys. Customers “are passionate about buying local, buying more sustainably and having access to the freshest possible herbs and leafy greens all year-round,” she says. The Infarm partnership “was a way to meet these customer concerns while also bringing something new and unique to market.”

Other grocers like Loblaw, Longo’s and Whole Foods Market buy microgreens and baby greens from GoodLeaf Farms. Last year, GoodLeaf opened a 45,000-sq.-ft. automated vertical farm facility in Guelph, Ont. that produces 800,000 pounds of greens annually. “Our dependence on imported produce is significant and consumers are realizing it’s just out of balance,” says Jacquie Needham, account manager at GoodLeaf. “We need to be keeping some of this production in Canada.”

In February, McCain Foods announced it would invest more than $65 million in GoodLeaf Farms subsidiary TruLeaf Sustainable Agriculture, making it the single-largest shareholder in the company. GoodLeaf is now planning two more vertical farms in Eastern and Western Canada.

Needham says GoodLeaf’s produce appeals to a number of groups: mothers and others who want to know the source of their food, older folks who favour local fare, as well as younger people who understand the potential benefits of the technology.

On its packaging, GoodLeaf prominently touts that its greens are pesticide-free. “The local, pesticide-free piece of our core business really resonates with people. Because we’re grown in a controlled environment we don’t have pests.” And while vertical farms have been criticized for requiring significant energy use to power LED lighting, Needham insists LED lights are becoming increasingly efficient. 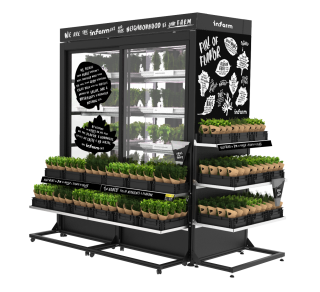 Vertical farming “takes an industry that is as old as time,” moves it indoors and makes it more efficient from a capacity and yield standpoint, says Travis Kanellos, chief strategy officer at vertical farming operation Elevate Farms. In addition, the shelf life for produce grown with vertical farming methods is 50% longer, he says, depending on what’s being grown.

Elevate opened a facility last year in Welland, Ont. that can grow one million pounds of leafy greens annually in a 5,000-sq.-ft. space, with plants stacked 13 layers high inside a building with 21 feet of clearance. An outdoor farm would require about 100 acres to grow the same amount, he says. “We’re upwards of 98%, 99% more efficient on a land consumption standpoint.”

Charlebois says vertical farms eliminate price volatility, “arguably the biggest problem in produce” because there is greater control of variables like currency, climate and logistics. Pricing for GoodLeaf fare is in line with organic produce, Needham says. A 50-gram package of microgreens sells at Loblaw for about $3.99.

Charlebois notes that the effects of the pandemic should give domestic vertical farms a boost, with momentum growing for greater food autonomy. Quebec and other provinces could provide energy rebates to vertical farm operations, which will increase their opportunities to establish in or near cities, he says.