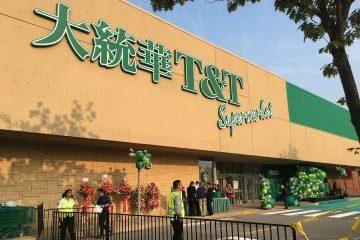 Already Canada’s largest Asian grocery chain, T&T Supermarket has expanded again with the opening of its 26th store last week, in the city of Richmond, near Vancouver.

T&T founder Cindy Lee and CEO Tina Lee
Located at Lansdowne Centre in a space formerly occupied by Target, the 70,000-sq.-ft. store is the chain’s largest and becomes its flagship location. “We opened our first T&T Supermarket store in B.C. 25 years ago and it was important for us to launch our biggest location to date, back where it all started,” said CEO Tina Lee at the store’s grand opening ceremony on Aug. 16, which drew a big crowd—1,000 people according to T&T—eager to grab a first glimpse of the supermarket.

READ: T&T Supermarkets’ Cindy and Tina Lee to be honoured by Retail Council of Canada

The extra space at the Lansdowne store has allowed for features not seen in other T&T locations including a Starbucks coffee shop and 14 self-serve checkouts, which Lee says have been added to appeal to convenience-seeking shoppers. Also unique to the store, and a “first in Canada”, is its seafood bar where customers can get instant-cooked live seafood. The way it works is customers select items at the seafood counter where the food is prepped then sent via a track to a cooking station where in-house chefs prepare it for the customers who can eat it in the seafood bar’s dining area. “It’s a restaurant-quality seafood experience at supermarket prices,” says Lee, adding that inspiration for the seafood bar came from visits to restaurants in Shanghai and California.

CHECK THIS OUT: Hema’s robot-operated restaurant


Another unique feature of the Lansdowne store is a weigh station in the middle of the produce department where shoppers can have their loose fruits and vegetables weighed and priced with a sticker to allow for a speedier checkout experience. The store also has an in-store pharmacy where customers can get instructions for their medications printed in both English and Chinese.

Of course, the store also features full meat and fresh produce departments along with a wide array of Asian specialties ranging from ornately packaged mooncakes to an Asian Street Food quick-serve area featuring more than 30 types of snacks from China, Taiwan and Hong Kong including popcorn chicken, lamb soup and sesame crispy cake.

Lee says T&T, which was acquired by Loblaw in 2009, will also be investing $30 million at its Richmond head office and warehouse. And later this year, T&T plans to open its 12th B.C. store in East Vancouver.