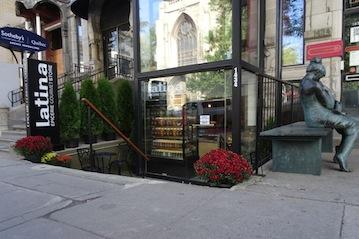 Latina, an upscale grocer in Montreal’s Mile End district, has opened their second store in the heart of downtown, a subterranean 1,500 sq. ft. cross between a convenience store and a fine-food emporium.

The store features coffees and croissants front of store for those who want a quick on-the-go breakfast, as well as wines and imported beers for those grabbing something on the way to dinner. Its long refrigerators are filled with ready-to-eat meals, fresh and frozen. Sauces and soups, packaged meats and poultry, fish and fresh produce are on display along its two long, narrow aisles.

The concept, says Bernard Legendre, who owns Latina with his wife, Josée Chrétien, is “in and out, everything you need, every day, again and again.”

The Latina Gourmet Store is in a chic area of Sherbrooke St. W across from the Museum of Fine Arts.

“It should do well,” said Julia Armstrong, a well-known Montreal food writer who was inspecting the store opening day. “There’s a lot of people with money here and no competition at all.”

Legendre said the store cost close to $500,000 to open in a space leased for 20 years and is the product of several years of thought and planning.

“We always would say, ‘how small can we make it and make it work?’” says Legendre.

To maximize efficiencies, Latina’s kitchens in Mile End and its back of store will serve as the supply hubs and warehouse, Legendre said, and a full-time employee will shuttle goods between the two stores.

The staff of 50 had been increased to 56, he said, but people will work both stores as needed.

“Our butcher will come here maybe for a couple of hours a day and see how things are,” say Legendre, but staff will be trained to cut some aged beef at the new store and will fill in as needed.

“What’s difficult in this concept is we’re leveraging the same staff,” he said. “We’ve invested a lot on our people and we want to use them.”

In Quebec’s fiercely competitive grocery market, Latina’s new store, a convenience-sized grocer offering fine foods, ready-to-eat and fresh produce in the heart of the city is a novel concept to watch.