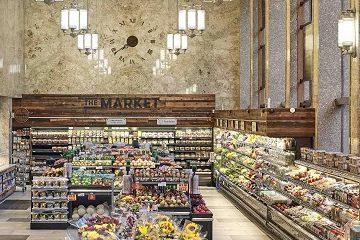 It’s just after 6 p.m. on a gloomy mid-January Wednesday, and the Independent City Market in Toronto’s King West neighbourhood is packed with young professionals picking up dinner. There are enough Canada Goose parkas here to cause serious concern for the bird’s long-term survival.

One of three “urban concept” stores operated by Loblaw in downtown Toronto, it’s smaller than traditional grocery stores, catering to condo and townhouse dwellers in the neighbourhood.

In addition to standard grocery departments like produce and meat, the store also does a brisk business in prepared foods, with customers stocking up on soups, salads and home meal solutions.

From small-format stores built around convenience and speed to click-and-collect services to same-day online delivery, new grocery formats and innovations have exploded over the past decade as the industry caters to Canada’s growing urban population.

Just over 80% of Canadians live in urban areas, according to Statistics Canada. And Environics Analytics shows Canada is also home to approximately 9.5 million millennials, with many residing in major urban markets. It is this group that’s driving much of the innovation within the grocery sector, says Bruce Winder, cofounder and partner in the Toronto consultancy, Retail Advisors Network.

“It poses significant challenges for grocers, who historically have built most of their stores based on a big-box model more like a factory than a grocery store.”

Isabel Morales, manager of consumer insights at Nielsen, says millennials are increasingly ditching cars—12% don’t own a vehicle, compared with 8% of the total population—which, coupled with busy schedules, is creating a greater need for convenience in grocery.

Morales says meal solutions are the leading factor influencing where customers shop, coupled with location and extended hours. Prepared meals and “grocerants” are particularly attractive to millennials, she says.

Grocers, meanwhile, say catering to urban customers has taken on added importance. “Given how stringent the competition is out there, everybody’s looking for different avenues to service customers, says Rosanne Longo, spokesperson for the Toronto-area chain Longo’s.

Longo’s played a key role in developing Canada’s online grocery industry with its 2004 purchase of Grocery Gateway. She says that led to the development, two years later, of its urban concept store, The Market by Longo’s. Currently, there are five stores scattered throughout downtown Toronto.

“ paved the way for us to go into the downtown core because more people were recognizing the brand,” says Longo. “When the condo boom was happening, it was a good opportunity to take advantage of some properties that were available.”

Most of The Market by Longo’s stores are located in commercial office towers, enabling them to cater to shoppers at key dayparts (as they arrive at work, at lunchtime and as they shop for their evening meal after work). The market stores are also smaller than a regular Longo’s (typically between 5,500 and 7,000 sq. ft., versus 35,000 sq. ft.). While The Market by Longo’s offers staples such as fresh produce and meat, the
product assortment is typically smaller than that of a full-size store, and caters to time-starved professionals with a variety of ready-to-eat foods.

“It’s really for grab-and-go stuff or stock-up items if you’re on your way home,” says Longo.

Retail consultant Ed Strapagiel says downtown dwellers in small condos have insufficient space to store a full week’s worth of groceries, meaning smaller baskets and more trips to the store.

Most major grocery chains, including Loblaw and Sobeys, have launched smaller urban stores, part of what Strapagiel describes as a broader trend that is also manifesting itself in segments such as hardware and furniture stores.

Sobeys, for example, has eight Sobeys Urban Fresh stores in Toronto and Ottawa. These stores range in size from 12,000 to 30,000 sq. ft. and are characterized by what senior director Mario Moccia calls a “store-within-a-store” design.

Sobeys Urban Fresh caters to a variety of constituencies, from health-conscious shoppers to on-trend foodies and gourmet shoppers, says Moccia. Products include staples like produce, meat, bakery and dairy, while an on-site kitchen cranks out prepared meals. Some locations even offer pizza made fresh in a stone pizza oven, a made-to-order noodle bar and a Nutella Café.

Winder applauds the innovation occurring in the industry, but says many of the new offerings remain a work in progress. “When your business model changes, it takes a few years to really refine it.”

This article appeared in the March 2017 edition of Canadian Grocer