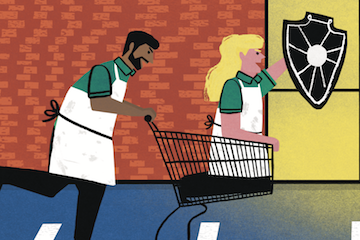 It was a stunning claim, one that likely sent the eyebrows of more than a few grocers gathered at the Retail Council of Canada Store 2016 conference shooting skyward. James Bacos, managing partner of retail at the German office of global management consultancy, Oliver Wyman, told the gathering that, in 10 years, as many as half of the large grocers in Europe might not exist. Their would-be killers? The German hard discounters Aldi and Lidl.

Knocking out competitors with a lethal combination of low prices and premium private label products, Aldi and Lidl have proven irresistible to European shoppers. The discount retailers have grown their combined network from 8,000 stores in 2003 to more than 20,000 today.

After steamrolling their European counterparts, they are now setting their sights on North America. Lidl opened 20 U.S. stores this June (with a goal of 100 stores open by summer 2018) and has clearly signalled its intention to go “mango a mango” with American established grocery giants by opening in close proximity.

“They make a habit of locating their stores very close to the major centres of supermarket sales,” says David Rogers, president of the Chicago consultancy DSR Marketing Systems. “Aldi’s pattern is to go across the street from Walmart, and Lidl is copying that. They want to feed off existing sales and awareness.”

Lidl is following the path forged by Aldi, which opened its first U.S. store in Iowa in 1976, and now operates 1,600 stores in 35 states. Aldi is in the midst of an aggressive expansion strategy—the latest salvo in what Rogers describes as a “blood war” between the two companies—with the objective of increasing its U.S. store count to nearly 2,000 by 2018.

For now, the hard discount threat remains confined to the United States. Neither chain has commented publicly on possible expansion into Canada, although, in the early aughts, Lidl had plans to enter the market, even establishing a head office in Mississauga, Ont., before abruptly backing away with no official explanation.

“They’re a very secretive company, as is Aldi, but I suspect they got a little worried about the size of the market and that it’s very dispersed,” says Rogers. “You’ve got six major urban areas, but they’re spread over three thousand miles.”

Tom Barlow, president and CEO of the Canadian Federation of Independent Grocers, agrees that Canada is a tough market to enter, given both its geography and its established discount retailers. Canadian grocers also operate on razor- thin margins that all but the hardiest newcomers might find unfavourable. (Pre-tax profits for the sector hover just under 1.5%.) “To come into the Canadian market, you have to be a really good operator,” he says.

Target’s ill-fated entry into Canada should also serve as a cautionary tale for potential newcomers, Barlow adds. “It’s something that happens both on the supplier and the retailer side—thinking that the market here mirrors the U.S.,” says the one-time Coca-Cola executive. “I can tell you that we may look the same and talk the same, but the market dynamics are significantly different.”

DSR’s Rogers acknowledges that Canada has a more evolved discount sector than the United States, with operators including No Frills, FreshCo and Food Basics. But, he says, these chains have “gone soft” in recent years, even moving slightly upmarket with their continued emphasis on fresh.

For their part, Canadian grocers remain wary of the impact hard discount grocers could have on their business. In a recent survey on CanadianGrocer.com, nearly 36% of respondents admitted to being “very worried” about the possibility of Lidl arriving in Canada, while an additional 26% admitted to being “somewhat worried.”

Their concern isn’t unwarranted. According to an April report from the Boston Consulting Group (BCG), How Discounters Are Remaking the Grocery Industry, these stores are becoming an alternative for today’s consumers, and might soon account for half of all grocery sales in many markets.

Where hard discounters’ business was once cyclical, rising and falling in tandem with consumer confidence, they are now a firmly entrenched alternative to mainstream grocers. Says the BCG report: “Their customer base has grown beyond low-income shoppers to include savvy, high-income consumers who are increasingly asking a fundamental question: “Why should I pay more?”

Discount is also a hugely under-represented sector in Canadian grocery, accounting for only around 3% of the total market, according to some reports (compared with 40% in Denmark and a whopping 60% in Turkey).

According to the BCG report, discounters are growing share through a variety of tactics: opening bigger stores with more innovative features; expanding their fresh and organic product assortment; improving the customer experience through extended hours and faster checkout service; and developing private label products that are not only cheaper, but capable of beating out name brands.

Bill Bishop, founder of the Chicago consultancy Brick Meets Click, says developing a strong private label offering is crucial to competing with Aldi and Lidl, should they arrive in Canada. “You could argue that Loblaw has President’s Choice but the premium private label products coming out of Aldi and Lidl are exceptional,” says Bishop. “It’s the main thing they do differently.”

Indeed, Aldi captured an industry-leading 40 awards— including 15 innovation awards—at the Food & Drink Own Label Awards in the U.K. this year. And a recent report in U.K. trade publication The Grocer stated that private label accounts for 95.2% of Aldi’s sales in canned goods, and 84.9% of Lidl’s—far surpassing the market average of 39%.

With approximately 250 stores across Canada and a strong private label offering in President’s Choice, No Frills, Loblaw Companies’ 39-year-old banner, would be serious competition for European deep discounters, notes Bishop. “No Frills has a very strong reputation, and that prepares Loblaw Companies to defend itself against the hard discounters,” he says. “Knowing the way Loblaw works, and how smart and relentless it can be, the company will be able to take some additional costs out if needed, drop its prices and make the business even more effective.”

Bishop adds that No Frills’ strength in key competitive areas such as meat and produce would enable it to compete with any challenger. He notes, however, that both Aldi and Lidl have built exceptional procurement systems that enable them to bring international products to their stores more easily.

The hard discounters likely pose a more serious threat to Canada’s traditional grocery retailers, says Bishop, who would be forced to compete with chains whose price difference on some items can be as much as 25 to 30%.

The European hard discounters also excel at promoting deep discounts for a limited number of products, which helps drive store traffic. A mango that typically sells for 99 cents, for example, might be promoted at 39 cents. “Their price reductions are not 5, 10 or 15%, they’re more than 50%,” says Bishop.

He says one way for mainstream grocers to combat hard discounters would be to reduce prices on 300 to 400 “top of mind” items. “You need to find ways to reduce price on some products, so it’s not a glaring differential between what’s in your basket versus the hard discount basket,” he says.

DSR’s Rogers says Aldi and Lidl stores tend to carry only about 1,600 SKUs, compared with 30,000 to 50,000 for a mainstream grocer. Established grocers need to be “very competitive”—pricing items within 5%—on duplicate products, while promoting their superior product assortment and things such as customer service and better fresh foods. “Basically, you’ve got to give away and make your money on the other things you do,” he says.

The BCG report also states that cutting prices by 5% requires a reduction of about 20% in operating costs. This can be achieved through reducing the total loss of unsellable food, reducing supply chain complexity, negotiating more favourable pricing with suppliers and striving for more efficient use of labour.

Bishop says the hard discount retailers continue to place a strong emphasis on dry goods, opening up an opportunity for incumbents to successfully compete with a strong fresh food offering. “In order to blunt the appeal of their logistical efficiency, you need to have more differentiated fresh food,” he says. “Some of the better retailers in Canada, like Longo’s, have done really well.”

Perhaps some indication of what might happen if Lidl and Aldi were to enter Canada comes from Australia, which frequently draws comparisons with Canada because it has a similar population spread over a huge swath of land. Aldi entered the Australian market in 2001 and now controls nearly $12.2 billion of the country’s $91 billion grocery industry, with some experts predicting it could grab as much as one-fifth of market share within five years.

And there have been casualties. Aldi’s arrival contributed to the 2011 demise of the discount chain Franklins, leaving mainstream grocery chains including Woolworths and Coles vulnerable to Aldi’s deep discounting strategy. “There was no price competitor left when beat up Franklins,” says Rogers.

For now, Canada’s grocers will just have to wait and see how things unfold south of the border, and ready themselves for battle should Aldi and Lidl turn their attention north.

This article originally appeared in the July/August issue of Canadian Grocer.