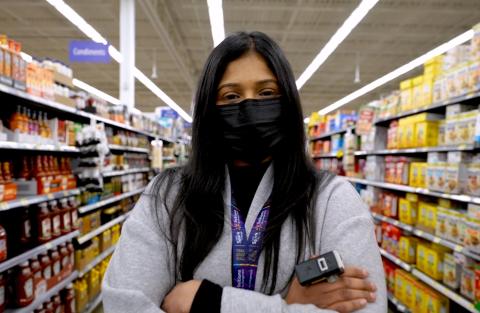 The retailer has equipped in-store employees with wearable technology called ring scanners. The scanners, which are worn like a ring on a finger, are meant to make it easier and more comfortable for workers to pick orders. Walmart says they’re lightweight and easier to use than handheld units, and having both hands free makes for an easier and faster picking experience.

“The ergonomic device features a button that associates press with their thumb to scan the item while they pick,” said Stephanie Fusco, manager of corporate affairs at Walmart Canada, in an email to Canadian Grocer. “As an example, with bigger items you can now use both hands, creating a faster and easier process compared to the hand-held devices traditionally used.”

Fusco said following a pilot, ring scanners were rolled out to an additional 130 Walmart Canada stores this spring. “The hope is to bring this technology to all of Walmart Canada’s more than 400 stores in the future,” she said.

In a blog post, Walmart said while picking online grocery orders isn’t a race, associates who participated in the pilot attained their highest year-to-date pick speeds.

“Our associates are an integral part of how we’re making our omnichannel experience faster, easier and more convenient for our customers,” said Fusco. “That’s why we’re hiring for omnichannel associates across Canada and part of why we’re introducing wearable technology like ring scanners that help our associates pick faster and more efficiently–with less effort.”