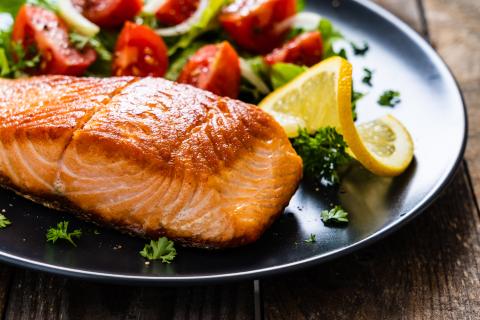 Canadians love salmon—and they prefer it wild, according to a new study.

The Agri-Food Analytics Lab (AAL), in partnership with Caddle, polled 10,000 Canadians last June to better understand how people perceive salmon production methods, how often they eat the fish and if they preferred certain species.

The researchers found that 79% of Canadians eat salmon, with 10% of those eating salmon weekly. Boomers have the highest consumption rate at 84%, while millennials have the lowest at 72%. When it comes to certain species, 38% of Canadians prefer Atlantic salmon and 33% prefer Pacific salmon, which includes sockeye, pink, chinook, and chum species. A total of 29% do not have a preference.

The findings come as the United Nations General Assembly has declared 2022 the International Year of Artisanal Fisheries and Aquaculture, and the Canadian federal government is deciding its next steps after announcing last year there would be a transition away from open net-pen farms in coastal British Columbia waters by 2025. According to AAL, the decision has sparked debate over whether that could limit the opportunity for aquaculture pens to operate along Canadian coastlines.

“There are a lot of discussions right now related to how we farm salmon in Canada and debate about ocean pens and land-based pens,” says Sylvain Charlebois, director of the Agri-Food Analytics Lab at Dalhousie. “It’s been a divisive issue for quite some time and it’s important to get the facts right in terms of how salmon is produced sustainably.”

Ocean-based production involves salmon being hatched in tanks on land and then moved into pens in the ocean. With land-based farms, salmon are reared entirely in tanks on land.

The survey found that more than half of Canadians (54%) believe that aquaculture is a sustainable way to harvest salmon in Canada. Asked if they prefer wild or farmed salmon, 49% of Canadians prefer wild salmon, but 42% have no preference.

In addition, 21% prefer to eat salmon that has been raised on a land-based farm, 39% prefer an ocean farm as a method of production. However, the results suggest that half of Canadians misunderstand what the terms land-based and ocean farm mean.

“A lot of people think wild salmon is better and to a certain extent you can appreciate why,” says Charlebois. “There’s a lot of information about wild salmon and a lot of doubts related to some practices in aquaculture. However, there are some [aquaculture] companies that do a really nice job making sure that their supply chain is sustainable. What’s important here is to provide more transparency to the public because industry doesn’t necessarily have a strong track record when it comes to transparency. It doesn’t necessarily communicate well or often with the public, and that’s to its detriment.”

For grocery retailers, Charlebois says staff training for the seafood counter is key. “Because labour is such an issue, you can see that people aren’t necessarily trained properly and so customers can’t get the proper answers. If you put someone at the fish and seafood, you have to make sure that they are knowledgeable about the differences between wild and farmed species—not just salmon but overall.”