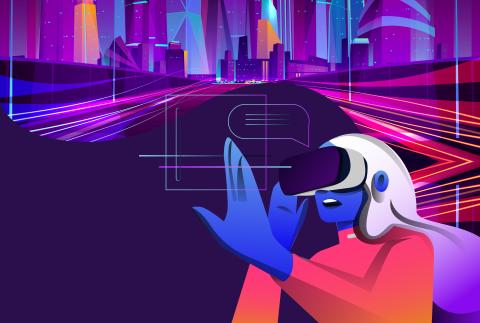 There could be time in the not-too-distant future when employees will be trained entirely within a virtual grocery store that mimics a real one; where customers don virtual reality (VR) gear to see only the products and information relevant to them as they walk the grocery aisles.

Once the domain of science fiction novels and video games, the metaverse is gaining momentum as a viable – and inevitable – evolution of the internet and is pushing the limits of possibility within the digital world.

“Metaverse” is a term originally coined in 1992 by Neal Stephenson in his novel Snow Crash to depict a computer-generated universe. Today, it’s the most popular word used to describe a digital environment (i.e., platform) that uses augmented reality (AR) and VR to give users the ability to immerse and interact in a digital world that mimics our real one.

Daniel Vogel, an associate professor in the Cheriton School of Computer Science at the University of Waterloo, is part of a research team developing a metaverse-type lab environment. Rather than a virtual world people get in and out of, the focus is on creating an augmented reality that layers digital information on top of real-world objects. “It’s still fully immersive, but you’ll be using hand and body gestures to interact with real-world objects with layers of additional digital information,” he says.

In a grocery setting, that could mean using VR gear that would allow you to see digital information, usually found through your phone, displayed on walls or products where it makes the most sense, says Vogel. He notes there are already available devices that do this, albeit too bulky and expensive for regular use. “If you think [about] how fast virtual reality has happened, a lot of the technology is related so AR isn’t far behind.”

While many will say this notion of a mainstream augmented and virtual reality environment is still in its infancy, a number of companies are already exploring what the metaverse will mean for their businesses – and what they can do to capitalize on it.

A 2022 report by McKinsey and Company, Value Creation in the Metaverse, notes that corporations, venture capital and private equity have invested more than US$120 billion in the metaverse in the first five months of this year alone – more than double what was invested in 2021. The report also estimates that most learning and development could be happening in a metaverse environment by 2030, with 57% of metaverse-aware companies saying they are already adopters.

It’s not surprising that large technology companies are the biggest investors, so far, but organizations across industries (including grocery) have also started exploring the space, even going so far as to create strategies and investments for operating in the metaverse. In fact, it has been reported that big box retailers like Walmart are developing their own cryptocurrencies and non-fungible tokens (NFTs) to use in the metaverse. Meanwhile, French grocery giant Carrefour has already bought property in an area of this virtual world called The Sandbox, equivalent to 30 supermarkets. This past May, the grocer launched its first NFT collection called NFBEES, inspired by veggie or fruit pollinated by bees, and is planning to provide fun and educational bee-themed games in The Sandbox.

Marty Weintraub, national retail leader at Deloitte, points to several “buckets” of opportunity for grocers in a metaverse environment, with training and onboarding as a key one. “Turnover is high in a grocery store, so you’re training people constantly on how to stock shelves, unload a truck, make a price change or run a cash lane,” he says. “There is efficiency and agility in being able to do that in a metaverse environment without employees having to be physically in the store.”

Another area of opportunity is in store layout and design. “[In the metaverse] you could run three or four very different planograms simultaneously, and in less time, so you could really make that merchandise execution process a lot more streamlined,” he says. “Likewise, you could make a lot of quick changes to store fixtures and design.”

While Weintraub believes the notion of curated customer shopping experiences using AR and VR will eventually be feasible, he says internal uses of the technology are easier “to wrap your head around” and offer a clearer return on investment. “Depending on how [the world’s] economic situation plays out, we could start to see simpler use cases for the metaverse in the next two to three years,” he says. At the same time, he points to the need for retailer awareness around data privacy, cybersecurity, fraud and user health and safety. “These are things that don’t get as much press but are extremely important as we get caught up in the ‘shiny penny’ aspects of the metaverse.”

Next steps for grocers

With the pandemic heightening consumers’ expectation of digital capabilities, retailers are being pushed to rethink what their online platforms are going to be in the future, says Sonia Mathur, managing director & management consulting practice lead, Canada at Accenture. “Some of the grocers out there have publicly disclosed that [metaverse] planning is part of their strategic objectives,” she says. “It is something they are thinking seriously about as part of contingency plans, expanding portfolios and reach, and really just for the competitive element.”

With Canada lagging behind early adopters in Asia, Europe and the United States, Canadian grocers also have the advantage of coming into the metaverse after major technology issues and application misses have been resolved, says Mathur. “We can take some of those learnings and apply them here,” she says, advising retailers to “be open to the value you can tap into…don’t be afraid to learn and experiment with some of the ways other markets are availing this technology.”

Best-selling author, retail industry futurist and founder of Retail Prophet, Doug Stephens says there is no harm in grocers of all sizes “dipping a toe in the waters” to better understand the notion of digital real estate and how applications in the metaverse could enhance experiences for both their employees as well as their customers.

But, he believes it is blockchain (the digital, decentralized ledger of transactions across computer systems that cryptocurrencies rely on) that will most benefit grocers as the metaverse evolves. “Grocery’s main problem today is waste and inefficiency and blind spots within the supply chain,” he says. “If I’m a grocer, I can look into that blockchain and see the movement of product from one end to the other, which means I can also validate claims that a product is fair trade or has a net-zero carbon [footprint].”

Stephens predicts all of Canada’s major grocers will be employing some level of blockchain within the next five years to optimize their operations in the metaverse. “As a small- to medium-sized business, you don’t want to get locked out of those blockchains and [supply chain] relationships,” he says. “It’s something everyone should be getting out in front of now to better understand the kind of work being done."