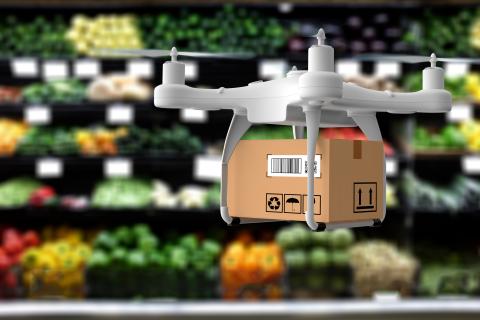 Absolutely, insist industry observers like retail analyst Bruce Winder. “People are on a sort of honeymoon with brick and mortar again, so you’re seeing e-commerce across all channels soften a bit. But e-commerce isn’t going anywhere; it’s just taking a bit of a break.”

Sylvain Charlebois, director of the Agri-Food Analytics Lab at Dalhousie University forecasts that by 2025, 10% of food sales in Canada will occur online, an almost six-fold increase compared to around 1.7% of food sales prior to the pandemic.

The Maru Group’s Feel, Behave, Think tracking survey, commissioned last July by PayPal, found 21% of Canadians say they will do more grocery delivery after COVID than before.

“What grocery delivery does is really save consumers a lot of time and convenience, which is really hard to measure sometimes,” says Joey Diaz, executive vice-president and chief merchant at Giant Tiger. “Grocery delivery will continue to be strong.”

However, Mike von Massow, associate professor of food agriculture and resource economics at the University of Guelph, believes the current period of high inflation will make it more difficult for delivery to grow as consumers seek ways to cut costs. What’s more, with the hybrid model that combines work-from-home and in-office still going strong, people are commuting less and aren’t as time-pressed, which lowers incentives for delivery, he says.

Going forward, consumers can expect to see a mix of models for grocery delivery, says Shash Anand, vice-president of product strategy, at mobile solutions provider SOTI. Consumers “will want flexibility in the way they can order and what they get delivered.”

Here’s a look at some of the trends that will affect grocery delivery in the months and years to come:

Earlier this year, discount chain Giant Tiger partnered with third-party delivery company Instacart to make same-day delivery accessible to many of its customers. The service is available in Instacart service areas, representing more than 180 of Giant Tiger’s 260 stores in Canada.

Customers are time-starved and are looking for delivery as fast as an hour, depending on the market, says Simon Rodrigue, senior vice-president and chief digital officer at Giant Tiger.

Rodrigue says deliveries of Giant Tiger products have been strong in downtown Toronto and Montreal where the retailer does not have a presence, as well as in more remote areas, like Thunder Bay, where the discount retailer’s brand is strong. Giant Tiger prices for Instacart purchases are the same as in store, but online shoppers pay Instacart delivery fees, about $7 for Giant Tiger orders.

Von Massow believes grocers will become less interested in third-party delivery services once they realize they cannot afford to share margins with another company. Instead, they will build their own delivery infrastructure. “You’ve got another player in there taking margin from what is a relatively low-margin business.”

Grocers also risk losing customers if there’s a delivery problem. “If I use Instacart in partnership with Loblaw and it goes poorly, who do I blame? If Instacart screws it up, that’s compromising my ability to keep that customer,” von Massow says. By bringing in delivery internally, grocers will be able to manage and optimize the customer experience from start to finish, he says.

Instacart was seen as a low-risk, high-reward path to pursue when Amazon bought Whole Foods Market back in 2017, and many grocers who did not have e-commerce programs were caught off guard, explains Mark Fairhurst, vice-president, marketing at Mercatus Technologies.

Third-party services come between grocers and the customers they’ve worked hard to acquire, he says. Fairhurst cites a Barclays Bank study out of the U.K. that found retailers are losing connections with consumers, as those who use Instacart as the first point of purchase often perceive Instacart as the retailer.

Fairhurst says retailers need to have leverage over companies like Instacart and DoorDash and not sign exclusivity deals with them. “If you’re a retailer, your ideal situation is to be able to foster competition among these delivery providers, so you get the best price and service.”

Ultra-fast delivery companies that promise delivery in as little as 15 (or even 10) minutes, cropped up during the pandemic. Companies operating in the Canadian market include Ninja and Tiggy.

Consumers are increasingly expecting rapid exe- cution and “these ultra-quick services are really going to raise the bar,” says Charlebois.

Rapid delivery companies tend to operate in densely populated metropolitan areas. The product range is typically narrow but “sometimes that’s all people want,” Charlebois says. “It’s a bit of a work in progress,” but he expects to see some successes in Canada’s major cities.

However, Fairhurst says consumers don’t necessarily want or need groceries within 15 minutes. “What they really want is certainty. It’s more about precision and control than it is about speed of delivery.”

Von Massow sees rapid delivery as a niche mar- ket for when people need groceries quickly. “Fifteen-minute delivery is not going to become the standard for grocery delivery.”

Contrary to belief, North America is a pickup first, not delivery first market, says Fairhurst. He maintains much of the attention on delivery has been fuelled by venture capital and private equity money.

“Our research has shown that, post-pandemic, online grocery is heavily weighted to pickup if you’re buying online.” Curbside is the most popular option at about 45%, followed by delivery at about 35% and the remainder for ship to home.
Pickup services are most popular with four-person households, which are also the most profitable to grocers, says Fairhurst.

Going to the local grocery store for pickup typically costs less than delivery and, he says, is often just as convenient. “You can get a 30-minute time slot, you have control over the fulfilment experience as opposed to sitting at home waiting for a delivery.”

Curbside and in-store pickup represent “a big part of our business,” says Giant Tiger’s Rodrigue. “It’s all about convenience.”

“Often, mom is coming home from work or she’s picking up kids from school. Having that curbside offering allows her to get in and out without getting out of the car and getting the products she needs,” he says. It’s counterintuitive, but some customers pre-order their pantry items for pickup, says Rodrigue, which then frees up time for them to browse apparel and other items in store.

According to Brick Meets Click-Mercatus figures, the number of monthly active users for delivery fell by 8.8% in April in the U.S., while pickup fell by only 2.5%

Not everyone is on side with click and collect. Charlebois calls it “a half-baked sort of solution” that’s more convenient for grocers than for consumers, but he says most grocers will continue to operate the service given its low cost.

Drone delivery received a lift in the United States this year when Walmart announced its drone deliveries could reach four million households in six states by the end of the year. The retail giant says it will be able to deliver more than one million packages by drone in a year.

What does Walmart’s drone service look like? Customers can order items totalling up to 10 pounds online. Orders are loaded at the store and flown remotely by a certified pilot to the customer’s home. A cable on the drone slowly lowers the package.

In Canada, however, drone delivery “appears to be a few years away, with the main impediments being regulatory roadblocks” by Transport Canada, says Anand of SOTI. Regulations governing drone use in populated areas “really need to be modernized a bit to make this a reality.”

According to SOTI research, 41% of Canadian consumers would consider delivery drones to deliver small packages and 47% would consider autonomous  vehicles to deliver larger packages to their home. Labour shortages and labour costs will drive retailers to try to adopt technology such as autonomous vehicles, Winder says. If autonomous vehicles reach a point where they’re considered safe, “they will be a game changer.”

In the United States, Walmart is expanding a self-driving delivery pilot project. Closer to home, Loblaw signed a multi-year partnership deal with technology company Gatik in 2020 to test autonomous delivery vehicles in Toronto.

“The idea of an autonomous vehicle is an amazing one, but what it doesn’t do is manage the point of contact with the customer and it’s the same with the drone,” says von Massow.