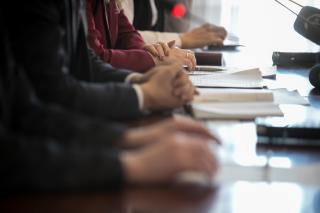 The key stakeholders leading the process to draft a new Grocery Industry Code of Practice say progress has been made in recent months, but more discussion with a larger group of industry players is needed to “refine the broad direction we now have into a specific set of proposals.”

That was one of the key messages in a progress report submitted late last month to federal, provincial and territorial (FPT) agriculture ministers by the 10-member steering committee of industry association representatives.

Last year it was suggested the FTP wanted concrete proposals for the code by the end of March, but instead have agreed to allow an expanded consultation process to further develop the code and resolve key issues.

While a code of conduct intended to address a range of pain points in the working relationships between grocery suppliers and retailers has been discussed for years, things have progressed significantly since Empire Company Limited and Food, Health & Consumer Products of Canada (FHCP) proposed their own draft grocery code of practice last March.

A few months later, a new alliance, which included key players like the Canadian Federation of Independent Grocers (CFIG), the Canadian Produce Marketing Association, Food and Beverage Canada, the Retail Council of Canada, was formed to work on proposals of their own. And a few months after that, the 10-person steering committee was meeting regularly to develop the code, leading to the progress report.

“We are making progress,” said Gary Sands, CFIG’s senior vice-president, public policy and advocacy, adding that the March target was never realistic. “This is a big industry. There's a lot of players involved in a lot of issues that need to be addressed.”

In a statement provided to Canadian Grocer,  Agriculture and Agri-Food Canada (AAFC) said it reviewed the progress report and was “pleased to see the range of issues that have been discussed to date, and that progress on developing a code of conduct continues.”

Asked about the timing, AAFC said “building consensus across the supply chain takes time, especially if lasting solutions are to be developed.”

At this point last year, it seemed like two distinct factions had emerged when FHCP and Empire (led by CEO Michael Medline) presented their own proposal. But since then, the meetings and discussions have brought the industry closer together to develop a code that benefits everyone, said FHCP’s CEO Michael Graydon.

But to keep moving forward the steering committee wanted to get more input from people actually “on the ground” in the industry—both suppliers and retailers—dealing with issues being discussed rather than relying on leaders from the various associations, said Sands.

A series of working group meetings will take place over the next couple months with key industry stakeholders, members of the steering committee (as observers) and a neutral competition lawyer, to discuss key subjects of the code including:

“Their job is to have an honest, confidential, candid discussion about those issues, see if they can arrive at a consensus they can provide to the steering committee,” said Sands of the working group meetings.

The FPT has not set a deadline, but Sands said it was critical the process not be unnecessarily rushed.

“We feel it's more important to get this right than just to meet a deadline,” he said. The CFIG has been calling for an industry code for many years now, he said. “But we don't want bad code. No code is better than a bad code.”

“If we didn't feel progress was being made, then we'd be the first sounding the alarm bells. But are we making progress? Yes. Will we have a draft code to present to this industry this year? Yes.”

One of the issues still to be resolved is if the code will be regulated by governments or overseen by the industry itself without government oversight.

“It is too early to say definitively that a regulatory or non-regulatory route is required,” states the report.

However, both Graydon and Sands now say it’s important to avoid the regulated code and the extreme complexity that would come with it since it would require specific rules for each province.

“It needs to be mandatory… and it has to be enforceable,” said Sands. “We have to find the mechanism to do that, [and] we haven't yet.”

“We've agreed in principle across the board that the code will be mandatory and enforceable, so that's a big principle out of the way,” Graydon. “And both the retailers and the manufacturers are coming to the table with a keen desire to find a solution. I'm very optimistic.”